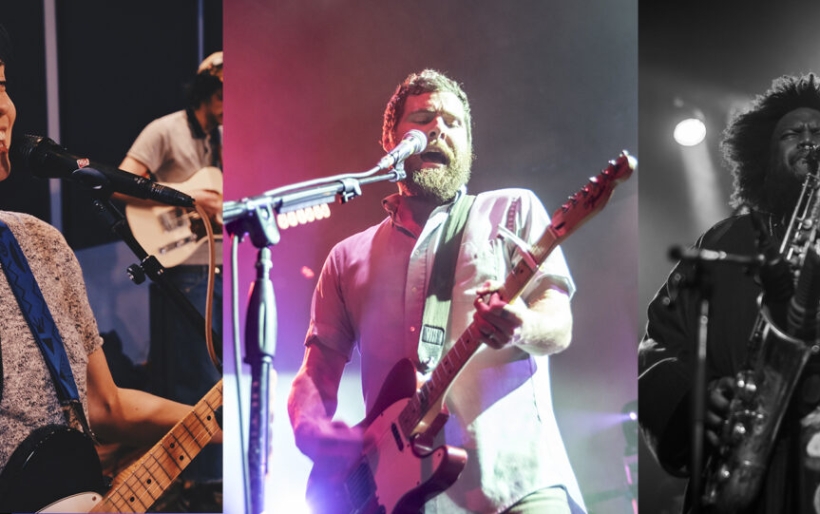 Warm weather indie rock, gamer theme music, a song that samples a soccer game and more — here’s what’s been in our headphones this week.

I’ve only recently been digging into this release from early in the year, Anna Burch’s debut album Quit The Curse, but that may just be a good thing because its sunny, slow-but-in-a-good-way songs are warm weather music for sure. This is one of the more upbeat tracks on the record, and it’s effortless blend of 60’s pop influences with indie rock undertones made me add it to my summer playlist the first time I heard it.

Arizona’s Lydia has been one of my favorite bands for at least six years now, and the cool thing about them is that almost all of their albums sound nothing like each other. I’m really excited for this new release, Liquor, because teaser songs like “Sunlight” have this dark element to it, with definite synthetic vibes as opposed to the acoustic feel of 2011’s Paint It Golden or 2016’s modern rock-y Run Wild, though the latter is arguably my favorite of theirs. “Sunlight” is showing me that this new album has a lot of potential to be unique, and it’s a great song to just chill to. They also just released a video for the track, and it fits the mood so well.

Manchester Orchestra – “I Know How To Speak”

Manchester Orchestra always finds a way to move me, tugging at the taut strings in my chest. This is the music you listen to while driving through the rain or walking through a chilly, darkening wood. “I Know How To Speak” is tender and raw with vulnerability. Andy Hull has a such unique voice that stretches effortlessly across an impressive range. It rises, sustained over humming basslines, arpeggiated riffs and gently sentimental piano, promising, “I’m really gonna try this time.”

This week Mothers announced a new album titled Render Another Ugly Method, out September 8th, and released the first single, “BLAME KIT.” Kristine Leschper’s voice is steadier than on previous works, channeling Palm in the song’s frenetic guitar and frequent tempo changes. The lyrics come together to form intense imagery questioning the boundaries of the body and the mechanism of an idea like blame. It’s a step in a new direction for Mothers, but not entirely unexpected from their inventive nature.

I don’t know how I’m late to the Vulfpeck party, but I am obsessed. “Mr. Finish Line” is a like a 70’s inspired funky bop that will make you want to dance all the way through. Best of all, it even throws in a dope sample from a real soccer game that somehow just goes with the song. How does Vulfpeck do it? I DON’T KNOW. If you’re into weird dancey tracks, this one’s for you.

Today Los Angeles jazz torch-bearer Kamasi Washington released his latest double-album, Heaven and Earth, and I predict that I’ll spend much of the weekend absorbing it. It’s 16 tracks and approximately 160 minutes of music, a lot to take in by any definition, and based on his set at Firefly last weekend, it explores all sorts of avenues of sound, from free form freakout to a more classic bebop oriented style. One of last weekend’s standouts, though, was the excellent “Street Fighter Mas,” which Washington introduced to the crowd with a bit of bragging about his video game prowess. He said he wrote the piece as his theme music for when he rolls up in the arcade with a pocketful of quarters to feed the machine. And you know what? That’s exactly what it sounds like. Perhaps its his proximity to Hollywood that makes cinematic composition rub off on Washington so much (moments of The Epic, like “Henrietta Our Hero,” feel like high-drama 40s soundtracks), but as you listen to “Street Fighter Mas” and the beat rides, the horns rise, and the choral voices soar, it’s hard to shake a mental image of Washington kicking open a saloon door, removing his shades, looking right and then left, and taking hold of a joystick, ready to serve other gamers their asses.