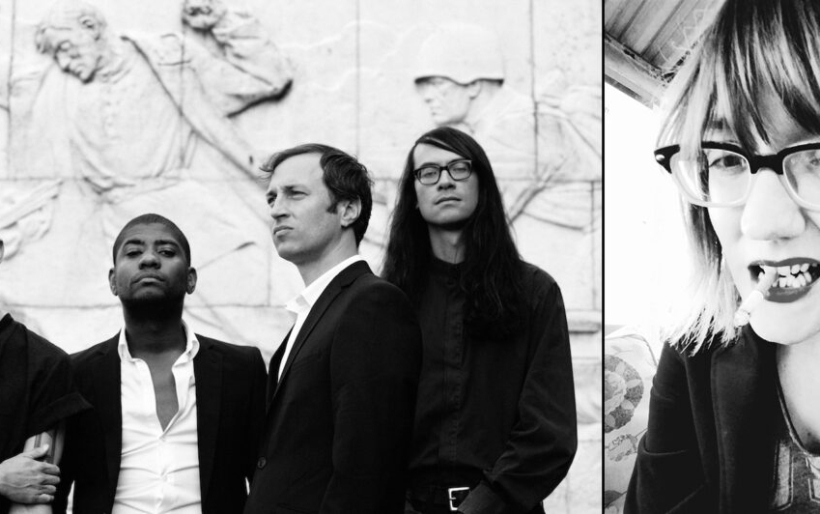 The sonic experimentalists of Algiers and Lower Interiors have different axes to grind when it comes to the music they make, they melodies they parse, and the rhythms that allow each to steer their own individual lyrical ship. For Algiers and its leader/lyricist Franklin James Fisher, there is a sense of holy rolling soul and cranky gospel tones. For Lower Interiors’ Maggie Brannon, there is a steelier, sinister, yet more playful sound to be found in her work.

This Friday June 29th, Algiers and Lower Interiors will come head-to-head (after coming face-to-face for the first time mere days previous) at West Philly’s The SoundHole to test the limits of their Dada-ist sensibilities. We caught up to both Fisher (with the rest of Algiers) and Brannon (all by her lonesome) driving separately into Nashville for the first gig of their co-joined tour dates.

The Key: What did you two know of each other, or each other’s work, and how long have you known that?

Franklin James Fisher: Not much, actually. Our guitarist, Lee Tesche, finds artists who are doing like-minded things, seeks them out and brings them to the fold for this entire tour. Lee has his finger on the pulse of what is going on across the country. I just shut my mouth, and do what they tell me.

Maggie Brannon: We have mutual friends, I guess. I was touring previously with someone who has toured with Algiers. Lee came to that show. I haven’t played any shows with this new project yet, so this should be interesting, as this will be the first night I’m doing Lower Interiors live.

TK: How is your newest music different from previous recordings or how people know you?

FJF: For us, The Underside of Power is much like our other work. When we first signed to Matador though, we still hadn’t played live. We were guys who swapped files. So during the first album cycle we were still coalescing as a live band. That definitely changed how we went into Underside of Power, and will change even more so as we go into the album after this. I don’t know that you can hear the “live” on our most recent record, but it definitely informed how we went into recording,

MB: This is my first solo project and I just got it finished yesterday. I mean, the CDs are just done, and I have lost a lot of sleep. That’s a little insane, right? It’s not so different from what I usually do – it is electronic and bass heavy. There’s no beats though. Poppy stuff going on for sure, but not…uh… it’s more soundscape stuff. I’ve only been doing this for about a year – making loops out of phone calls, making soundscapes and stuff. Hey, some of what I’m doing made people lose their appetites.

MB: I actually think that the sound of this new album, Wet Nicholson, will work greatly with what Algiers does. It will balance out as a show.

TK: Is there a song on the most recent album that came first and came to define what the rest of the new album sounds like?

FJF: Because the four of us write, record and contribute separately – not that linear, really – I’m not sure any one song is an overall good example. It changes as to who was writing what and when. Then again, the title song is a good overall idea of what we were trying to do for the start. A mission statement. Only more immediate.

MB: On my new thing, it all comes together as one song. There are two main structured pieces, one of which I am calling “Parking Lot Blues,” that I think sums up the project. It’s more sparse than most of the stuff that I do.

TK: You’re both very much of the studio. Do you genuinely like touring?

FJF: Absolutely. It’s a lifestyle, I’ve been a nomad my whole life. It’s difficult for maintaining relationships, but I wouldn’t trade it for the world. It’s addictive.

MB: I’m very much a creature of habit and routine, and I think touring breaks me out of that. Plus this time it’s just me, in a car. This is great. I can listen to whatever I want and go wherever I want to go, It’s hard work, but it’s very much like a rock n’ roll vacation.

TK: What are your usual audiences like? Interactive? Passive?

MB: I have the same sort of crowds most of the time, though I think it would be fun to get people there that just weren’t having it, I don’t know really annoyed by me.

MB: I have no idea how people are going to respond. I could try bringing this to a country club.

TK: Franklin, is an audience’s response to you magnified, because of what is perceived as a spiritual, preacher-ly bent?

FJF: I think that gets played up too often. I am probably more influenced by Michael Jackson than any gospel artist. It was Chekhov who said it is not the job of the artist to answer questions, but to ask them. That’s what we do: reflect the world and start a dialog, Not preach. Punk rock is about agitation. Somebody said it is about NOT having the right people like you. One of the best parts of playing out is meeting the people you’re playing to and watching then react. We’re convening around a platform and crating relationships.

MB: I don’t think that anyone who has stuck around at all is a passive listener. I think this is challenging stuff ins many ways. It is not something you can start dancing to easily without having to stop and listen deeply to what I’m saying underneath the music which may be disturbing. Most people who do stick around have been very engaged and I am very appreciative.

Algiers and Lower Interiors play The Sound Hole in West Philadelphia on Friday, June 29th; tickets and more information on the show can be found here.