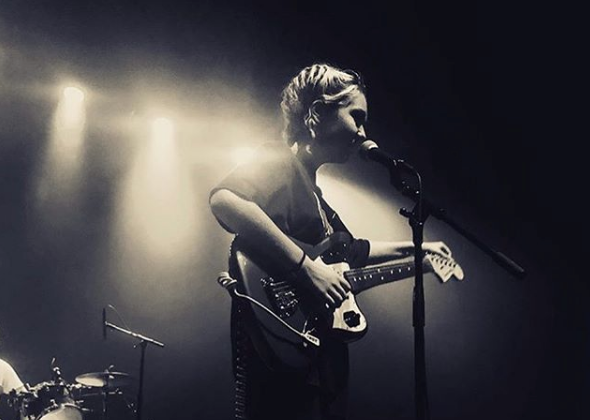 Following the release of their debut album, Lush, Snail Mail rocked the Union Transfer stage this Saturday, with front-woman Lindsey Jordan joined by a full band, going solo, and inviting a special guest out for a cover duet. Snail Mail is still in their early days, but has been making huge waves in indie rock, after releasing their breakthrough EP, Habit, and touring almost constantly since. If her set at UT proved anything, it’s that Snail Mail isn’t slowing down anytime soon.

Shortly after, Snail Mail began their set with an instrumental intro, leading into the second single off Lush, “Heat Wave”. Jordan’s excitement at playing for the packed house was noticeable, even if she hadn’t pointed it out between songs, commenting “When we booked this show, I honestly thought we’d be playing to seven people in this huge space, which would’ve been cool. This is cool too, in it’s own way.”

After playing through some of the Habit EP, and “Golden Dream” from Lush, they launched into their breakthrough single, “Thinning”. Their performance of it now feels gracefully worn, as opposed to the studio version, Jordan’s voice breaking throughout, adding depth to the post-adolescent lyrics, like “asking myself / ‘Is this who you are?’/ And I don’t know / It just feels gross”.

Having grown up learning classical guitar, it shows in Jordan’s playing style, especially on “Let’s Find an Out,” where, though she plays with a pick, it feels stylistically finger-picked, using unconventional transitions between chords. On her solos, Jordan avoids self-satisfactory shredding and instead opts for tumbling and flowing sequences, mimicking her train-of-thought-like singing.

The band exited for the final song, “Anytime”, Jordan captivating the audience with her voice and guitar, the post-breakup anthem trailing off to applause. For an outro, Jordan invited Katie Crutchfield (Waxahatchee, P. S. Eliot) onstage to perform a cover of Sheryl Crow’s “Strong Enough,” saying “This is for all the heteros, thank you.” Crutchfield has one of the sweetest voices in rock, and harmonizing with Jordan and adding Crow’s lyrics is a combination made in heaven.

Shortly after their exit, the band returned for an encore of “Static Buzz,” and managed to wrap up by 10:30. Their tour of North America is continuing through July, backed by Long Beard after the 18th, followed by some European dates, more info here.