In between shows in Asbury Park last night and New York tonight, Petal found time to make a quick trip down to Philly to play today’s Free at Noon, and despite the hectic scheduling, it was evident by the look on Kiley Lotz’s face when she walked onstage that there was nowhere else the Scranton-based artist would rather be this afternoon.

The short break from their co-headlining tour with Camp Cope, which included two sold-out PhilaMOCA shows a month ago, allowed Petal to bring their new album Magic Gone back to town to further celebrate the excellent release. Whether audience members were familiar with the band prior to today’s show or not, Lotz and company seemed to win the crowd over with their warm and welcoming presence before they even played their first song.

Petal’s eight-song set struck a balance between old and new and switched seamlessly back and forth between the infectious, fiery rock of their full-band songs and the sparser, softer tunes Lotz performs solo, giving us a glimpse of the incredibly wide range of what the band is capable of. On both the louder songs and the quieter ones, from the catchy and anthemic “Better Than You” to the heartfelt and delicate “Shy,” Lotz’s unparalleled vocals and honest, insightful lyrics remained the driving force behind each song as she traded off between guitar and keys.

Equally as notable as the band’s compelling performance and the caliber of Lotz’s songwriting is the kindness and authenticity she exudes, onstage and off. It matches the energy of the new record which has been described in the context of a journey of self-actualization, an exploration of vulnerability and strength. Toward the end of the set, before closing with “Heaven” off 2015’s Shame and after a thank-you list that included everyone from XPN to the audience members to the city of Philadelphia, Lotz took a moment to talk about how she hopes Magic Gone can serve as a reminder for listeners to “live your life more authentically and truthfully, flaws and all.” And with songs like Petal’s as a soundtrack, that suggestion doesn’t seem daunting at all.

Petal plays The Other Side in Wilkes-Barre July 22, and their next scheduled gig is in December with Slingshot Dakota in Bethlehem. Find more information on both shows on the XPN Concert Calendar. 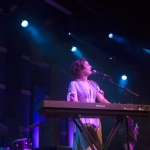