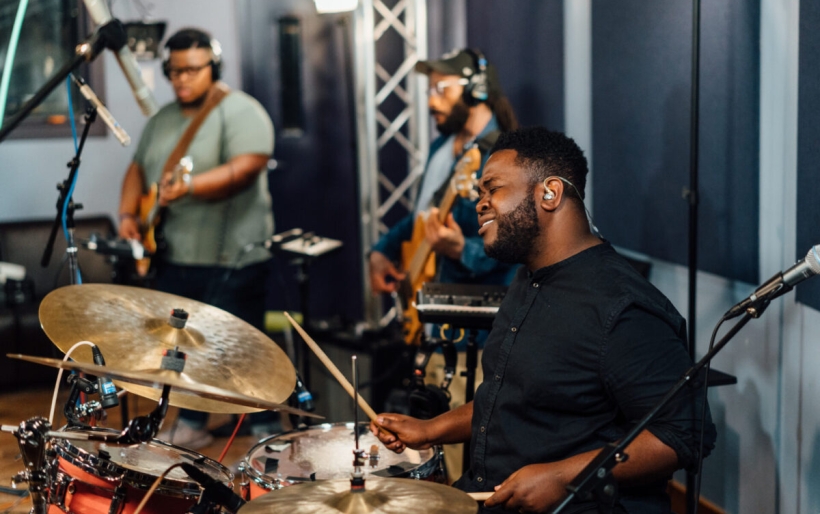 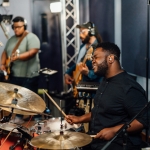 “The only thing that helped me was Jesus,” says drummer Marcus Meyers as he introduces the song “Anchors.” “And I know when you bring that name up, it can kind of get weird today. Maybe it’s the perception or the lens that we’re looking at him with.”

While spirituality is an undeniable undercurrent of his genre-spanning ensemble Ode to Omni, which returns to the stage at World Cafe Live tonight, Meyers is admittedly not self-righteous about his faith — acknowledging through that description that, perhaps, the idea of confrontational Christianity (which is a thing that definitely exists in the world of 2018) is part of that aforementioned lens.

But that’s not what he is all about; Meyers is more apt to use his songs meditate on mental health and self-care, acknowledging our weaknesses and finding sources of strength where we are able. His beliefs inform his life, his life informs his music, and as they perform pieces about self-improvement and empowerment for The Key Studio Sessions, he and his collaborators proved to be anything but one-dimensional.

Musically, Ode to Omni dishes an astonishing assortment of jazz, progressive rock, funk, soul, and more. The shimmering “Vice” tackle addictions of all stripes — “not just the ones you hear about on the news,” Meyers says, but also the seemingly innocuous but nonetheless damaging ones like social media’s constant connectivity. The gospel-tinged uplift of “Beautiful” is about loving yourself for who you are. Though it is mostly an instrumental, the opening sample on the fiercely driving “Authority” suggests that the song is about mankind’s propensity to be corrupted by power, and how we as a society struggle to transcend that. And the contemplative set-closing “Anchors,” as we hear Meyers describe in his extended storytelling introduction, is about finding some source of strength to center you in troubling times. For him, it’s his religion, but he urges listeners to reflect and discover whatever their anchor might be.

Beyond their worldly spirituality, Ode to Omni has a formidable presence as a live band — a couple years back, they turned heads with a Roots tribute featuring Philly rapper Mic Stew. Earlier this year, they released their second project, Perception (there’s that word again), where most of the songs from this session stem from. The current configuration of Ode To Omni features powerhouse vocalist Devin Farrel, a horn section of Chris Stevens on trumpet and Frank Rein on trombone, John Smythe ripping leads on guitar, Dan Finn creating atmospheres on keyboards, and a rhythm section of Meyers on drums and John Mcneil on bass holding it all together.

Before and after the session, we chatted extensively about Kamasi Washington expansive new project Heaven and Earth (you definitely hear his influence on “Authority”), about the rise and fall of Kanye West, about the sensory overload of Drake, about the best places to grab vegan food in Philly. The members of Ode to Omni are students of all sorts of music, new and old, secular and sacred, their outlook is one that cares deeply about the world around them, and all of that is reflected in their performance in this week’s Key Studio Session.

Watch the band perform “Vice” and listen to the session in its entirety below, and get tickets and more information on their gig tonight at World Cafe Live at the XPN Concert Calendar.