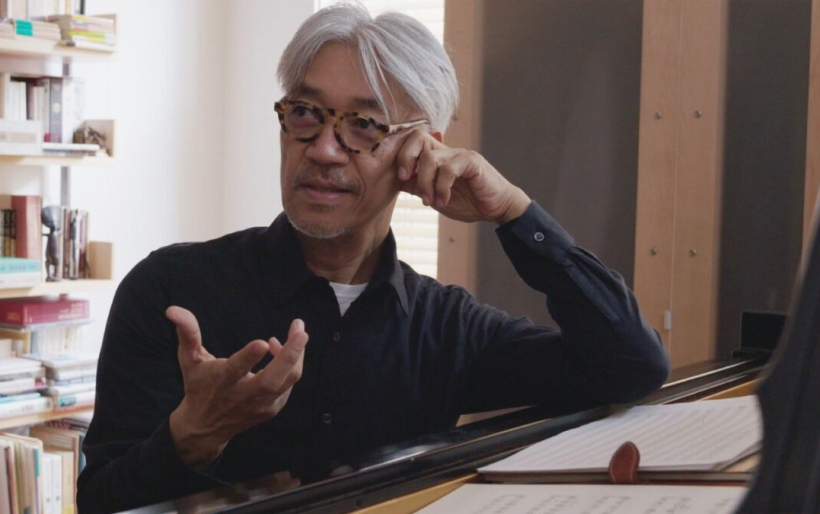 Loving Ryuichi Sakamoto has been a lifetime commitment: the early-days computer game electronica of Yellow Magic Orchestra, the sway of a solo career that’s gone from thumb-plucking Caucasoid funk to windy art pop to somber ambient etudes to glitch neo-jazz and Braziliana, the eclectic compositional éclat of his lustrous and tactile soundtrack’s scores.

The only wonder more endearing than listening to Sakamoto’s collective output is being Sakamoto – the pleasure and the point of director Stephen Nomura Schible’s intimate documentary Ryuichi Sakamoto: Coda which screens tonight at the Philadelphia Mausoleum of Contemporary Art.

Eerily but earthily atmospheric in a manner which mirrors the composer/performer’s environmental, ambient soundcsapes, the documentary – filmed across a five-year span, in Jaoan, during which Sakamoto survived a serious, much-publicized cancer scare – is as elegantly elegiac as you’d expect any Ryuichi product would be.

Coda starts with the eternally youthful looking Sakamoto hunting down a piano which survived the rushing waters of Japan’s mammoth tsunami of 2011. While an image of a piano floating through dangerous waters is a rich one, more disastrous problems were at hand for the composer and the planet: his level of anti-nuke activism heightened by the Fukushima Daiichi Power Plant nuclear disaster as well as diagnosis of Stage 3 throat cancer in 2014. All life is fragile – his, the earth’s, the water’s.

That this temporality became a magical, mystical part of his ambient compositional process (and the documentary’s scant narrative) with its (then) new found, earthen man-made tones – guided by the vision of that weather and water beaten piano – seems to create a sense of victory or renewed purpose for Sakamoto (a newer inspiration?!) as the documentary goes forward. That he goes back to his classical schooling roots in Bach and Tarkovsky makes Sakamoto seem like a child again, something any 60-year-older (his age in 2012) must cherish in regard to renewed personal and artistic vigor.

If you’re looking for deep personal details – beyond the occasional philosophical musing – or even rock-doc ephemera, Coda is the wrong place to start. Though we see a crinkly performance clip of YMO in 1979 at the heights of its powers (OK, it does look and sound cornier than their recordings), there is no real discussion of their importance to the future of electronic music (yes, they were and are as crucial as Kraftwerk). He does however open up while discussing how he worked within the confines of film score composition, as if a world (then) new to him offered him fresh insights as to his own process. Movies mean so much to him, Sakamoto even put his recovery in jeopardy as he scored Alejandro G. Iñárritu’s The Revenant. Said Sakamoto of the Oscar-winning director, “I couldn’t bring myself to say no.”

Like his music, Coda is a melancholy journey, an open air landscape of lofty vision, sound and emotions that never seem to land. And that’s good in a way. Being undistracted by additional talking heads might be lousy for historical or personal context, but it’s great in order to continue this all-consuming, all-Sakamoto-ness which surrounds the composer’s life, travelogue (stops in Manhattan and the Arctic Circle, as well as the forests of his homeland) and work. Maybe knowing him more beyond the meditative vibe of Ryuichi Sakamoto: Coda would only eclipse the magic.