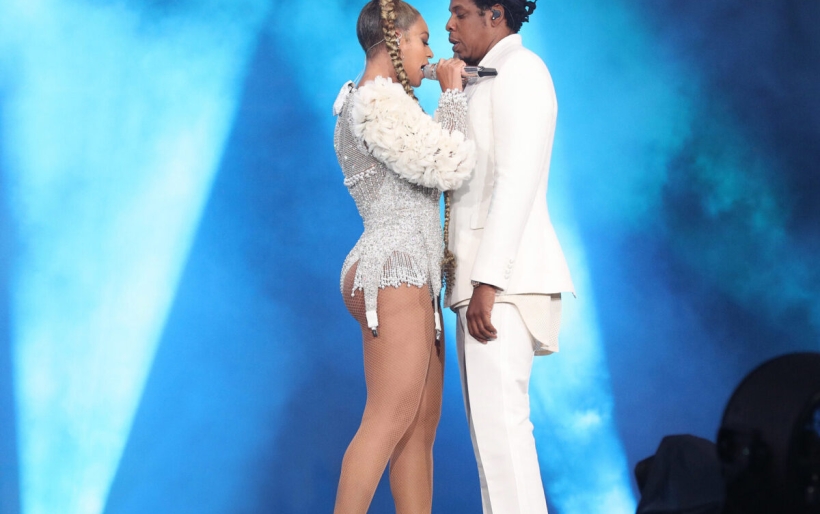 Beyonce and Jay-Z go On the Run, Again, at the Linc

Within a 2-and-a-half hour, 43 song framework – not counting additional snippets, elements and slips of other tracks, theirs and not theirs, within each tune – of costume changes, flames, good hair, stomping, dueling catwalks, raised moving stages, fireworks literal and figurative, choreographed sideways glances, nose tugs, and oh yeah, dancing, the wife and husband team of Beyoncé and Jay-Z  executed an On the Run II extravaganza at Lincoln Financial Field last night. It was great, and good, and too much, and occasionally not enough – but I’ll get to that.

Actually, let’s get to that now. Having witnessed every show that Beyoncé (Destiny’s Child, too) and Jay-Z (including duet gigs with Kanye West and Justin Timberlake) have performed within a 200 miles radius of Philadelphia, I can safely say that I know what the energy of a given Bey, Hova, and-or On the Run teaming (a la 2014’s first event) looks, sounds and feels like. Last night, more often than not, it was Beyoncé’s warrior-wonder-woman vibe that was blunted by Jay (although she totally managed to step on his best, most poignant moment – the Motown-ish “Song Cry” with its “I loved your point of view cause you held no punches / Still I left you for months on end” line, by walking out in the poufiest, most orange dress, and trilling all over HER most poignant ballad, “Resentment”).

Obviously, a large part of bringing these two together meant a merging of their sounds, or making it that their radically diverse sonic styles eased into each other’s in somewhat smoother fashion. With that, Beyoncé’s often aggressive, inventive rhythmic motifs and their high-stepping NRG occasionally got clipped by Jay’s sampladelic rap stylings when he hit the stage (it was pretty much an equal split for stage time). A lil’ bit. Surprisingly, however,  Jay-Z, rose to the occasion with his own energy boost on the snottily cocksure “FuckWithMeYouKnowIGotIt,” “Show Me What You Got,”  and a sneering “Story of O.J.” Plus, I’m certain he actually made more outfit changes than she and her dancing crew. Beyonce | photo by Raven Varona | courtesy of the artist

That said, Beyoncé and her movement crew raged through the frenetic, yet precise, military choreography  of “Formation” and “Run the World (Girls),” and Queen Bey did her finest live singing on the hammy hymnal “Perfect” (her Ed Sheeran duet), the swirling “Baby Boy,” and the clarion operatic  bits of “Countdown” (which including a snip of ” Broccoli”), and “Sorry.” While she juked and jived through the  pounding electro “Ring the Bell” and its hard sample of The Doors’ “Five to One,” she turned “Diva” into a title-worthy epic with her winding voice, her “to the left to the left” swipes from “Irreplaceable” and a spit of Jay doing a dirty “Dirt Off Your Shoulder.”

As for the togetherness element of the Carters show – and wasn’t that the point, the post-cheating denouement of desire, disgust, sorrow and reconciliation that was the Lemonade / 4:44 / Everything is Love, (a trilogy’s story I still don’t believe, but, hey who doesn’t love a good mystery) – they finished each other’s sentences like every great couple.

The opening salvo was as impeccable (her in a diamanté blazer, he in Don Johnson whites banging into Jay’s “Holy Grail” with Bey doing the “Smells Like Teen Spirit” hook), as the closer, “APESHIT,” was frenetic and oddly them.

Playing before a stage that started as one white video slap and opened onto a multi-tiered tower where the band and poppers played in silhouette, Jay and Bey acted out their king and queen roles to dynamic, haughty effect. They did the fun couple-at-love’s beginning stages with her flirty “Naughty Girl” and his gangster leaning “Big Pimpin’” they talked the currency of the world around them like marrieds at a dinner table (“BLACK EFFECT”), they prayed together (a gospellish “Young Forever”), and they left like they came in – hands clasped.