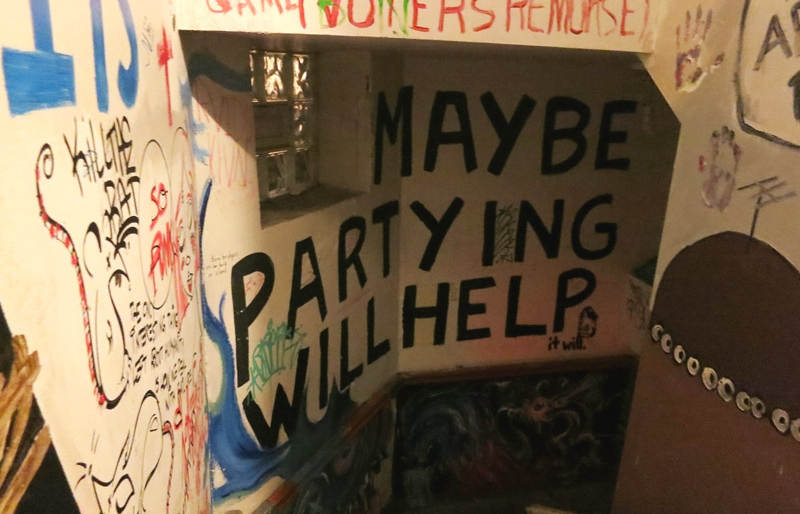 Starting off August’s edition of the Skeleton Key with some breaking news, which for the record is a strange thing when it comes to a column that comes out once a month. Pilam, the venerated “freak frat” at the University of Pennsylvania, is closed, at least temporarily. After more than four decades of being a space for DIY music in Philadelphia, the organization has lost its home. Details are still emerging as to what’s going on but for the time being I’d much rather just focus on the positive. Which, to repeat what I just said, is more than four decades of serving as a home for music in our city. That’s just incredible.

If you were to compile a list of every band that ever played Pilam we’d be here for a very long time. Hell, just looking at the listings of who performed at Human BBQ, the annual all-day concert at the house, is wildly impressive in both quality and quantity. This past year was the 40th BBQ with bands including Old Maybe, Norwegian Arms, Slingshot Dakota, and EDO. Screaming Females and Sadie from Speedy Ortiz played last year, along with a ton of other great bands. Two years ago it was Moor Mother, HIRS, and Japanese Breakfast. We could seriously go on like this forever.

The first time I specifically remember being at the festival was way back in 2001 to see An Albatross, Stinking Lizaveta, and … EDO. Some things never change. Also, I somehow missed Wesley Willis. Maybe I was getting pizza? To be honest, I might have made it to a BBQ before 2001. I had certainly been going to other shows there. But like many things connected to Pilam, it’s a bit hazy. I was at the house in 2002 to see King Missile and Philly shockabilly legends Sic Kidz. I skipped out on seeing Kid 606 play there in 2003 with Dalëk and Of Montreal, which as you can imagine I regret a lot. But you can’t go to every show, even if I try, and I certainly made it to a million shows at the house, from your normal locals-only basement show to the couple times Two Piece Fest ended up there to many, many BBQs.

I sat down with Nick Morgan from Pilam to find out what’s going on and where the organization is going next. I am only including a short snippet of this interview here. Watch this space for a longer article about the legacy of Pilam and an update about their restructuring.

According to Morgan, “For at least the next few years, the house where everything has been at for the past 40+ years will not be in our possession. That has happened before: there was the flood and the fire, the hole in the floor and the rebuild. BBQ was held in other locations.” That was back in 2004 and the building was temporarily condemned by the city. While he’s sure that Pilam will continue he admitted that, “It’s not a cataclysmic world-ender, but it sucks.” He explained that as a result of a “…sort of a ripple effect from events in years past and a slight downward trend in involvement in people living in the house, we didn’t pay quite enough rent for several years. It’s great that we weren’t kicked out immediately but it led to larger problems [later].” Currently there’s a different chapter of the fraternity living at the house.

Despite the fact that Pilam is classified as a fraternity – I’ve always described that aspect of things as being a sort of loophole that’s allowed a punk house to exist on Penn’s campus forever – there’s very little that goes on there that has anything to do with so-called Greek Life. The organization and house have always been a haven for outcasts at Penn and the surrounding universities, especially younger queer people who were not yet old enough to go to bars. Morgan stressed the importance of that multiple times in our conversation.

Asked about what the immediate future holds, Morgan told The Key that, “Right now we’re setting up two houses of all brothers and all friends of the house. Anybody who is close to the organization in such a way that they’ve been a boarder would be a friend of the house. They will be having house shows at those locations, I believe, and we’ll figure out BBQ. BBQ is going to happen. We’re going to do it. If we have to do it in Clark Park we’ll do it. If we have to find [another] venue we’ll do that.”

We here at The Key wish everyone at Pilam the best of luck and we’ll see you at Human BBQ XLI in April of 2019. Let’s take a look at the calendar. I’ll be sure to highlight the bands with ties to Pilam since that feels like an important thing to do.

On Tuesday the always wonderful Jeffrey Lewis & Los Bolts are playing JB’s with Strawberry Runners and Hour. If you’ve never seen Jeffrey Lewis before, you owe it to yourself to go see him and his band play. It’s not only super fun folky punk stuff but the lyrics – and choice of Crass covers! – are smart, clever, and oftentimes just plain sweet. And if you’ve seen him before then I’m preaching to the choir and I’ll see you there.

The description of the Wimps that’s attached to their show on the 9th at Boot & Saddle claims that they’ve, “successfully filtered the best parts of 70’s Rough Trade, the International Pop Underground 7” series, Devo, The B-52s, the Breeders, etc. into a unique and timeless sound that appeals to playlist streaming teens AND adults who own over 500 records.” That might read like a whole lot of PR nonsense but you know what? It’s true, they really are that good. The Kill Rock Stars trio have been around for only six years but have managed to amass a rabid following. Opening up will be RunHideFight and Sky Farm, the new band from Kevin Boyer of Tyvek. Members of both those bands – especially Brother JT! – played at Pilam an incredible number of times over the past couple decades. Tyvek was at the house in 2009 with Ed Schrader’s Music Beat, Height, and Gavin Riley.

That night is also the opening of the Street Movies! traveling film fest that’s being put on by the Scribe Video Center. The neighborhood-oriented series is bringing independent films – “fiction, animation, documentary, and youth and community produced work” according to their website –  to nine different locations around the city over the course of the month. Moor Mother will be performing at the first night, held at Baba Yahya’s Garden at 2229 North Broad St.

There are two important birthdays this month. Common Beat, the up-and-coming record shop on Baltimore Ave., opened in August of last year. I wrote an article about it at the time and a year later the owners, Keri Girmindl and Carlo Frese, were kind enough to invite me to DJ their anniversary party on the 11th, which also happens to be my birthday. Come say hi! I’ll be sure to bring my More Fiends albums cause it’s also Elizabeth Fiend’s birthday! That’s right, Philadelphia’s finest DIY maven and the host of the anarchist home ec and sustainable living organization/public access show the BiG TeA PaRtY is turning 60 this month. I hope to be half as cool as her one day.

More Fiends are a band that definitely played at Pilam a lot over the years. The same can be said about Jenna and Scott from HIRS, who performed at the house regularly in that band and in their previous one, Best Friends. Jenna has a bunch of new solo recordings – including an upcoming split with her own band, which is neat – and will be going on tour later this month. The kickoff show is a doozy: she’s playing with Alice Bag at Johnny Brenda’s on the 12th with the always fantastic Full Bush opening! I can’t wait.

Pinkwash has returned from a slight hiatus and are packing in the gigs until guitarist Joey Doubek inevitably goes back out on tour with his other band, the Providence-based political poppers Downtown Boys. You should go see Pinkwash whenever you can, as the two piece powerhouse is one of the best, and certainly one of the more underappreciated, bands in Philly. They’re playing at the batting cages on the 16th with Blowdryer, Joey Sprinkles, and Jon Ehrens. This will be a good one! Also, I heard a rumor that Downtown Boys will be back in town next month to play with Shopping at PhilaMOCA. Fingers crossed because that would be an amazing show.

For the record, I’m not really trying to highlight bands that played at Pilam. But also: everybody played there. That includes Pinkwash and Blowdryer. So did Yankee Bluff, who are playing the day before over at Beautiful World Syndicate in South Philly with Vacation and Permanent Body. Peter from Yankee Bluff helps book Two Piece Fest, which happened at Pilam at least a couple times over the years. I bet Barrett from Permanent Body helped out with stuff there. This really is a huge loss.

Total Fucking Destruction is definitely on that list. The West Philly grindcore superstars played Human BBQ XXXIII in 2011 along with Dangerbird, Asteroid #4, Creepoid, and many more. They’ll be making just their second Philly appearance of 2018 on the 19th at PhilaMOCA, performing after a screening of the brand new documentary Slave to the Grind about the history of this loud, abrasive, and most of all incredibly fast music.

On the 23rd out in Lansdowne, the Wildflowers of America will be playing their first show in years as part of the Open Sound series that’s been going all summer. That’s Perry Shall from Hound’s recently resurrected rock band – he says, “FFO: The Plimsouls, Graham Parker, Elvis Costello, etc.” which is so rad – with members of Waxahatchee, Eight, Pinkwash, and more.Perry sent me a couple songs from the upcoming Wildflowers album and you’re going to absolutely freak out when you hear them. Look for that record sometime in 2019!

The aforementioned Astroid #4 split town soon after that BBQ appearance and now call the Bay Area home. They’ll be back in Philly on the 24th for a show with The Point Breeze Country Club at Johnny Brenda’s. It’s a busy night! At Ortlieb’s Multicult is playing with Cult Objects – I assume somebody will be covering “She Sells Sanctuary” by The Cult? – and at the First Unitarian Church it’s the Dark Thoughts record release show with Impalers from Austin who put out one of the best albums of last year.

The final date on my calendar is not that Shonen Knife show on the 29th at JB’s –  though seriously, you should go –  but the Sickies Making Films documentary about movie censorship being shown at PhilaMOCA the next night. Censorship has shaped so much of our society, from film and literature to music and journalism, and this doc really is a must-see. Plus it’s focused heavily on the Pope of Trash himself, John Waters! What else do you need?!