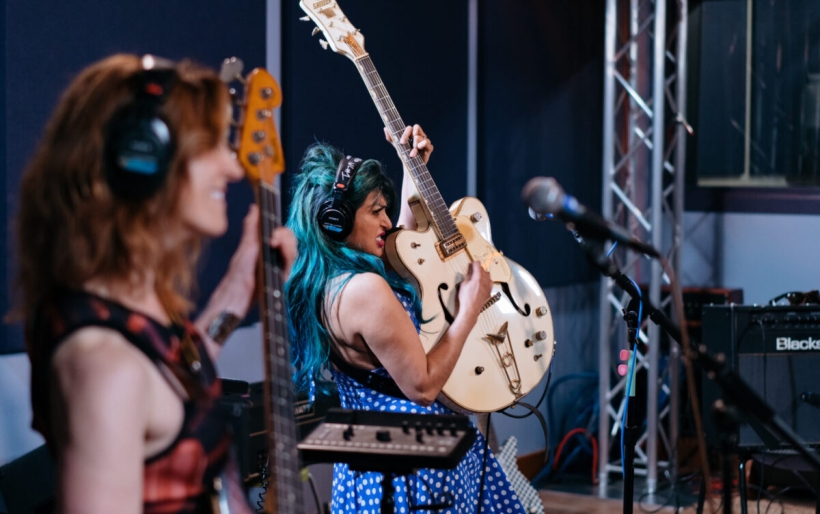 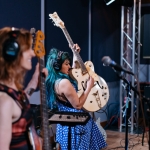 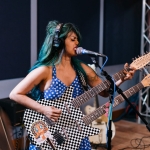 “I’m gonna sing you a little song about what it was like growing up in West Virginia, looking like me.”

RunHideFight frontwoman Geeta Simons says that in a long disaffected drawl on the simmering intro to the Stooges-esque “What Are You Talking?,” and we can take it a couple ways. Certainly, she was an 80s punk rocker in the Mountain State, a person whose style and artistic / cultural inclinations stood out from her conservatively-attired and -minded peers. But no, that’s not the whole story; not by a longshot. Simons’ family is of Desi heritage, and she grew up in a region that is — to put it bluntly — kind of blindingly white. And not the most tolerant, either.

“As a first gen, Indian American woman; I was busting up all kinds of cultural/gender norms by not finishing a pre-med track, having a green Mohawk and tattoos, playing in punk bands at skate parks, openly dating before marriage,” Simons recalled in an interview earlier this year with The Key’s A.D. Amorosi. “I was so angry and I desperately wanted to be heard and seen by a world which resisted that.”

Music was her outlet, continuing through her move to Philadelphia and her immersion in its indie community during the 90s and early 00s, when she played with Khyber regulars Swisher, Los Angeles, and Rockula. She stepped back from the scene for about a decade when she had children, but returned last year with a vengeance to form RunHideFight, a project born out of Simons’ heartache at her mother’s passing, her frustration at Donald Trump’s election, and the generally frayed-nerve state of the world. The racism she experienced as a young person was once again out in the open, and on the aforementioned “What Are You Talking?,” Simons directly confronts her own experience — culminating in a howling recollection of a classmate bullying her over her brown skin, saying “hey girl, how are you ever gonna wash all that dirt off your hands?” In the song’s cathartic conclusion, the taunt is screamed to a hammering rhythm: “that’s not mud / it’s just you.”

Simons’ lyrics have serious gravity to them; motherhood is another topic that comes up in RunHideFight’s Key Studio Session, both the band leader’s own experience with it, imbued with memories of her late mother. But her songs are just as prone to tackle more lighthearted rock fare, timeless topics like fumbling romance and busted dudes. The band — which also features John “Brother JT” Terlesky on lead guitar and vocals, Christine Weiser on bass and vocals, and Jon Kois on drums — tore through a robust nine-song set during their session, and the riffs and hooks recall the greats: Cheap Trick, The Sonics, The Who. To give us additional reference points, RunHideFight included two covers for good measure: “Send Me A Postcard” by Shocking Blue and “Lost And Found” by The Saints.

On the first Friday in September, RunHideFight headlines Johnny Brenda’s in a record release show for its new Hidden Volume Records 7″. “He’s A Jerk” is on the a-side, backed with “Because I Love You” — a song featured Simons’ signature double-neck checker guitar custom designed by Chris DiPinto of DiPinto Guitars. One neck is a twelve-string, the other neck is an electric sitar. The older she got, the more Simons realized that so much of the music she loved growing up, the mods and Nuggets-era 60s psych bands, drew on the tones and melodies of Indian classical music.

“These bands I loved were stealing from my grandparents’ generation,” she told me as we were setting up the studio. “So I’m culturally re-appropriating it.”

Listen to RunHideFight’s full Key Studio Session below, and get tickets and more information on their September 7th Johnny Brenda’s show at the XPN Concert Calendar.