Slaughter Beach, Dog and Thin Lips sweat it out at PhilaMOCA - WXPN | Vinyl At Heart 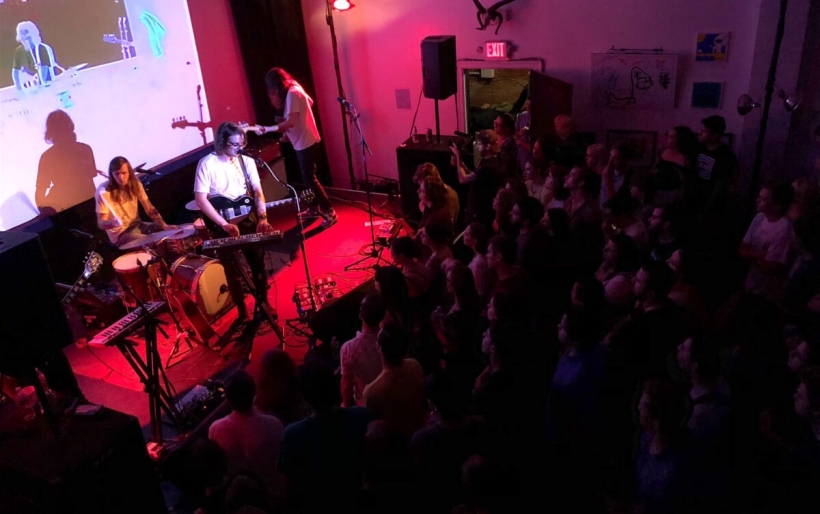 Slaughter Beach, Dog and Thin Lips sweat it out at PhilaMOCA

Two great Philly forces combined this past Saturday at PhilaMOCA, where Thin Lips and Slaughter Beach, Dog co-headlined along with opener Queen Jesus. It was a sold-out show coming at the tail-end of a hot summer. Fortunately, these are bands to sweat to. Thin Lips have a classic sensibility about their hooks that you have to move to, with clean riffs and sobering lyrics. Slaughter Beach, Dog, led by former Modern Baseball guitarist Jake Ewald, can play with a crowd instead, going from punk anthems (with a bit of Gibson twang) to solemn folk-inspired jams. Regardless of their duality, the crowd that night seldom could be found not echoing every word from the bands. Queen Jesus kicked off the set with their dank, muggy, verging-on-shoegaze songs led by frontman/drummer Pat Brier along with various members of Three Man Cannon, Cherry, and Sun Organ. Their five-person group create hazy, ethereal rock that’s as disorienting as a night without AC in the summer, with visuals of old Game Show Network clips featuring a particularly tragic clown projected behind them, inducing a creepy, unsettling effect. Thin Lips began their set with a few tracks from their new LP, Chosen Family, waking up the crowd from their state with bright tones, frontwoman Chrissy Tahsjian’s sharp voice, and an ecstatic drummer. Philly artist Curtis Cooper join Thin Lips for this tour, filling the band into a quartet and providing some effortlessly engaging guitar, reflective of their more blues-y work. The set also featured an incredibly subtle cameo from Hop Along frontwoman Frances Quinlan, who was featured on Chosen Family and the Weathervane version of “So Stoned” as well; she joined the band onstage for the rousing heartache anthem “South America.” Thin Lips has an enrapturing energy, creating punk that can capture the attention of any age, with deeply personal lyrics essential to good emo. Their live sets are impressively tight as well, either reflective of dedicated practice or simply excellent chemistry. Slaughter Beach, Dog edged for a quieter performance. Ewald is sometimes one for solo acoustic sets, usually seated, but was accompanied by a full band this time. Their indie rock takes on a folk persona, often depicting vignettes of familiar neighborhood settings, with summer settings, such as those described in “Pretty O.K.” and “104 Degrees”. The band volleyed from jam-band-esque ballads to more punk-centric songs throughout, with a certain rusty edge to the whole set. They ended on a ten minute performance of the aforementioned “104 Degrees,” with Ian Farmer using his bass to produce feedback from the amp, my personal favorite part of their live shows, resulting in a loud, tumbling and shrieking finale to the show.

Thin Lips 7 Slaughter Beach, Dog are touring for a few more shows along the East Coast, SBD then will be joined by GLADIE for their second leg while Thin Lips will be returning for a dual record release show with Shannen Moser at First Unitarian Church. More tour dates can be found here and here. 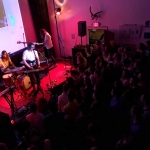