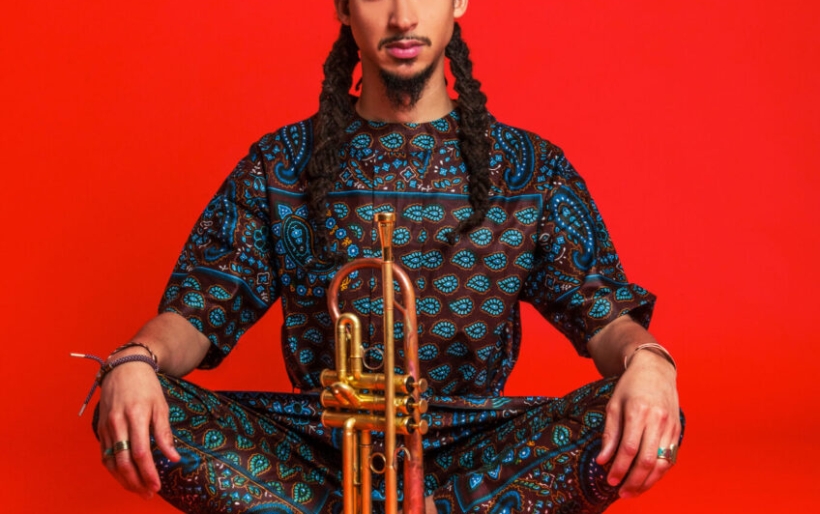 Theo Crocker | photo by Bryant Norman | courtesy of the artist

It seems that pianist George Colligan is as upset as the rest of us at the distressing headlines and malicious attacks that make up present-day politics in this country. But instead of unleashing a Tweetstorm to add to the migraine-inducing noise, Colligan – an undersung veteran who’s worked with such greats as Jack DeJohnette and Cassandra Wilson — put his fingers to better use. His latest album, Nation Divided, is a solo outing that muses on the state of the union, with evocative titles like “Blues for Charleston” and “The Strength To Move On.” It’s a stirring session that moves fluidly between the anguished and the outraged; in other words, it vividly captures the mood of the era. Colligan won’t be alone when he plays South on Sept. 5, though; instead he’ll lead a trio with the legendary rhythm section of Buster Williams and Lenny White. [TIX + INFO]

The same night, Fire Museum presents a show that seems to set the tone for a month’s worth of genre-blurring events in town. The pedal steel guitar is almost synonymous with country music, but the incredible Susan Alcorn is one of a few artists who have carved a new path for the instrument’s ethereal tones. A virtuoso player with a wide-ranging sense of exploration, she’ll play in an improvising trio at The Rotunda with avant-punk drummer Chris Corsano and Bill Nace, Kim Gordon’s partner in Body/Head. [INFO]

It’s extremely rare these days that any musician grows up listening to a single genre of music, increasingly so as streaming makes access to nearly the entire history of recorded music instantly accessible. Back at South, several ground-breaking young artists will explore the overlap between modern jazz, hip hop and soul. Over the course of a single week, Philly audiences will be treated to the R&B-flavored stylings of drummer/vocalist Jamison Ross (Sept. 7-8); trumpeter Theo Croker and his melding of acoustic post-bop and electric funk (Sept. 11-12); and the hip-hop rhythms and poetic musings of trumpeter Marquis Hill and his band The Blacktet (Sept. 14-15). [TIX + INFO]

Of course, there’s nothing new about melding genres, which has always been how music has evolved and changed. That’s been especially true in major urban centers – like Philly, where soul and jazz merged in countless organ bars throughout the city. The same can be said about Chicago, the city guitarist Bobby Broom has called home for more than three decades. A native New Yorker, Broom first began playing under the sway of jazz greats like Wes Montgomery and George Benson, the fruits of which included his long association with tenor icon Sonny Rollins, but he quickly absorbed the deep-rooted blues sound of his adopted city. On his latest, Soul Fingers, Broom’s band The Organ-isation (featuring B3 player Ben Paterson and drummer Kobie Watkins) brings those varied influences together with soulful interpretations of classic tunes from “Come Together” to “Ode to Billie Joe.” The trio plays Chris’ Jazz Café on Saturday, Sept. 8. [TIX + INFO]

Saxophonist Donny McCaslin had begun to mutate his music long before crossing paths with David Bowie, his muscular, Michael Brecker-influenced tenor workouts blissing out under the influence of EDM and indie rock. But working with the rock legend on his final recording, Blackstar, made a profound impact on McCaslin, the repercussions of which can be heard on his new album, Blow.. A full-fledged art-rock reworking of McCaslin’s jazz aesthetic, Blow. features the Blackstar band (bassist Tim Lefebvre, keyboardist Jason Lindner, and drummer Mark Guiliana) with vocals provided by Sun Kil Moon’s Mark Kozelek, longtime Bowie bassist/vocalist Gail Ann Dorsey, and Limblifter singer-songwriter Ryan Dahle. The core band debuts the new music in Philly at The Foundry on Sept. 11. [TIX + INFO]

With the West Oak Lane Jazz & Arts Festival, producers LifeLine Music Coalition featured a wide swath of Philly jazz along with a few classic R&B and soul ringers. Since launching the Philadelphia United Jazz Festival, they’ve kept the focus more squarely on jazz while maintaining the stylistic diversity. This year’s sixth edition on Sept. 15 will feature local legend Sam Reed, funky trombonist Jeff Bradshaw, LifeLine co-founder Warren Oree and The Arpeggio Jazz Ensemble and the Universal African Dance and Drum Ensemble, among others, performing on the outdoor mainstage at South and Broad, in PHS’ nearby pop-up garden, and inside Bob and Barbara’s. [TIX + INFO]

The festival won’t be your only opportunity to enjoy the last remnants of summer. Throughout September, Jazz Bridge is partnering with Councilman Curtis Jones Jr. to present their “Jazz in the Park” series at parks throughout the 4th District. Vocalist Barbara Walker appears at Nichols Park on Sept. 6; bassist and Pieces of a Dream co-founder Cedric Napoleon will lead his own band at Chalmers Park on Sept. 13; soulful vocalists Jill Salkin and Kevin Valentine share the bill at Gorgas Park on Sept. 20; and Suzanne Burgess draws the series to a close at In Yard Park on the 27th. [INFO]

Though Ars Nova Workshop’s season won’t really get into full swing until the second annual October Revolution next month, they’re offering an onscreen preview of the kind of boundary-stretching eclecticism represented so vigorously by that festival. At Lightbox Film Center on Sept. 27, they’ll present the Philly premiere of the new documentary Milford Graves Full Mantis, a portrait of the singular percussion legend Milford Graves. A living legend at a time when so many of the early pioneers of the avant-garde are being lost, Graves is unique in his holistic approach to music, nature and life, and the film dives deeply into his mind-expanding cosmology. [TIX + INFO]

The last event at Matt Yaple’s @exuberance listening room was a meditative affair, with pianist Ran Blake musing on film noir themes in a darkened room. This month he’ll host a much livelier affair, featuring what promises to be a robustly swinging trio. Drummer Sylvia Cuenca has played alongside such revered veterans as Tootie Heath, Louis Hayes and Joe Saylor, which attests to her propulsive rhythmic skills as much as the bandleaders she’s worked with – an impressive roster that includes Kenny Barron, Gary Bartz, Dianne Reeves and Michael Brecker, among others. Bassist Essiet Essiet was the last bassist to join Art Blakey’s Jazz Messengers, while pianist Dave Kikoski boasts more than 100 recordings, include his most recent leader effort with icons Ron Carter and Al Foster. [INFO]