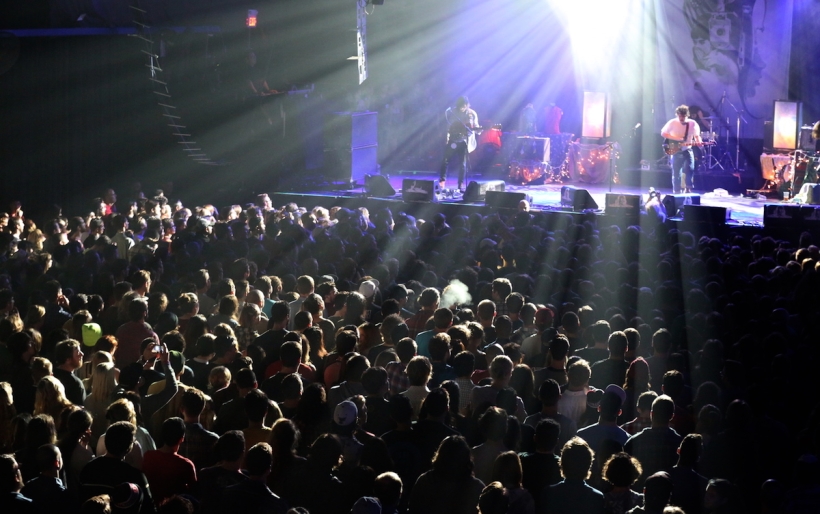 Photo by John Vettese | for WXPN

The Electric Factory is now North Seventh? Unless you can think of a better name.

Philadelphia venue The Electric Factory, it seems, is changing hands and identities.

Reports trickled in this morning that the iconic Ben Franklin head was no longer perched atop the Callowhill building that houses the 23-year-old venue. And though the venue’s website appears to be intact, its Instagram page has been rebranded @northseventhphilly — a placeholder account uses its former name @efactoryphilly to redirect — and the page now has a Bowery Presents icon for its profile pic.

Bowery Presents is the New York-based promoter, named for the Manhattan venue Bowery Ballroom, that was one of the founding partners of Union Transfer, as well as Boot and Saddle. It also books locally at the Mann Center, and was acquired by international concert promoter AEG, who booked at the Factory, in 2016. So in a roundabout way, their name in a prominent place makes sense here. The name change seems to indicate that Larry Magid — longtime Philly concert promoter who owned the venue and the name Electric Factory — is stepping down.

Upon visiting the bare-bones website northsevethphilly.com, we are greeted with a “Rename the former Electric Factory Contest!” offering two tickets to every show at the venue through 2020 for contestants from Pennsylvania, New Jersey or Delaware, and a short explaination.

This is the website for the venue formerly known as ‘Electric Factory’. Due to restrictions by the previous owner we are not able to retain the historic name. But don’t worry, the venue that brought you your favorite concerts with such memorable performances will continue to focus on bringing you the best experiences by the artists you love in the venue you love.

A press release block-quoted over at Brooklyn Vegan elaborates that those restrictions are due to Live Nation owning the trademark and logos — hence the missing Ben Franklin head. But the Factory was not booked or managed by Live Nation; Magid’s Electric Factory Concerts ran the venue, and when that company went through a chain of new corporate owners, Magid continued to run the space autonomously.

We’ve reached out to representatives from the venue and will update as we hear more.

UPDATE 3:21 p.m. In a press statement, Larry Magid said  “This is not a retirement call, but a continuation of the past 8 years as Larry Magid Entertainment Group producing national and worldwide tours and Broadway shows in addition to our concert business.”

Magid’s partner Adam Spivak is a partner in another Callowhill venue, Underground Arts, as well as Bonfire Entertainment, the company that books it, Ardmore Music Hall and MilkBoy. Bonfire, like Bowery, is owned by AEG.

“In the spirit of new beginnings, Adam and I wish AEG great success with our baby as well as Live Nation with their opening of The Met Philadelphia later this year,” says Magid. “50 years ago we blazed a path and we feel very comfortable that the tradition of great music in one of the greatest music cities in the world will be well represented and will continue for many years to come. Thank you for all your support through the years.”