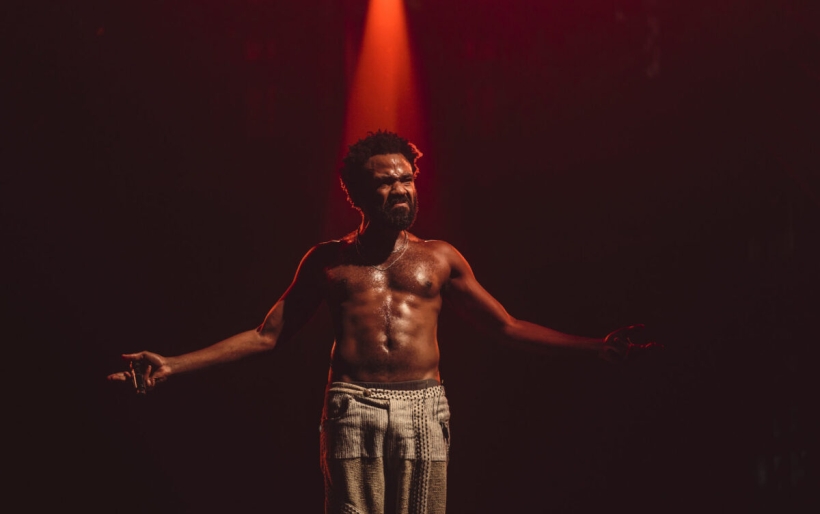 Childish Gambino | photo by Greg Noire | courtesy of the artist

If you were at the Childish Gambino concert this past Tuesday, then you might agree that it felt like a Wednesday night church service. Not in the sense that they were worshiping the rapper persona of actor Donald Glover (though there was probably some of that), but more in the energy he brought to the stage. His Philly fans packing the Wells Fargo Center came alive the way folks  might react after hearing a choir and their band go off for hours, and Deacon Gambino lifted their spirits to the stratosphere.

The opening act for the This Is America concert was Rae Sremmurd. At first, it seemed strange to pair the young Mississippi hip hop duo with Childish Gambino, who is twelve years older than them. However it seems like Gambino — along with peers such as Drake and J. Cole — realize that having the next generation of rap stars open up for their tours is a perfect way of bridging the gap between two generations of hip-hop fans, as well as bringing raw young energy to their shows, which is exactly what Rae Sremmurd did. For the most part, anyway.
In the beginning of the show, rappers Swae Lee and Slim Jxmmi started the party with hits like “No Type,” “No Flex Zone,” “Throw Sum Mo,” and “Come & Get Her.”  However, for some strange reason, by the time the duo performed “Swang,” Slim Jxmmi seemed to be out of it, as if he no longer wanted to be part of the madness that he and his brother created. He went from being turnt up with the crowd to standing on stage looking at his phone and then for some reason started heading towards their DJ, sitting next to him with his head bowed. At first it seemed like maybe Slim Jxmmi had got too lit to continue partying, but it was reported earlier that one of their bodyguards, Big Zeke, had recently passed away — the loss of their loved one was clearly affecting Slim Jxmmi.
The lights started to go out and Slim Jxmmi left the stage, leaving his brother Swae Lee to finish up the show with more Rae Sremmurd hits such as “Black Beatles,” covering his part on rapper French Montana’s “Unforgettable,” as well as singles from their recent triple-length album SR3MM and Swae Lee’s solo project Swaecation like “Guatemala” and “Powerglide.” Rae Sremmurd have hits that can set the crowd on fire, but sadly without the rowdy energy from Slim Jxmmie, the one-two impact sort of felt halfway there. But with the recent loss of a close friend, it’s understandable why the fire wasn’t as strong as the crowd would’ve liked it to be. Rest in peace Big Zeke, condolences to his family, friends, Rae Sremmurd and their team who continue to mourn over him. Childish Gambino | photo by Greg Noire | courtesy of the artist

After the brief intermission, the lights went out and lasers started pointing all around the Wells Fargo Center, along weird, chaotic noises that amped the crowd up. In an instant, Childish Gambino appeared on stage and began to rock the crowd with a new song called “Algorythm.” As the song wound down, he informed fans they were seeing their last Childish Gambino show, as this would be his final tour. The excitement led everyone to take out their phones, prepared to record an epic show, but Childish Gambino wasn’t having any of that. He immediately ordered his fans to put their phones down and enjoy the moment, telling them “This isn’t a concert, it’s church.”
The Atlanta rapper’s attitude seemed contagious to his crowd during songs like “The Worst Guys,” and “World Star.” It was quite an experience to see the whole building bounce and lose their mind as they chanted “Worldstar” during the song of the same name. Even the band was so funky that it would have felt wrong if Childish Gambino didn’t give them a quick shout out, and as he surprised the crowd and came down section 124, he took time to mention the talented musicians; Chris on drums, Tom on bass, Ray and Sam on guitar, Danny on percussion and Lonette on keys, all of whom played a major part in the Gambino’s services.
From here, Lonette played “Stand Tall,” and as he started to sing in falsetto, the crowd’s energy rose, leading perfectly into “Boogieman” which felt like this generation was getting its own version of a Parliament / Jimi Hendrix collaboration. With the help of four choir singers in black robes, Gambino decided to sprinkle some gospel in his southern funk gumbo on “Have Some Love,” taking time at the song’s conclusion to reflect on how far he’s come in his career. He told his die-hard fans how crazy it is to see a stadium filled with people who knew his music, assured the crowd that he is living proof that they have the ability to do whatever the F they wanted in life, and went on to dedicate “Riot” to every dream that was in the building.
After slowing it down to give a chilling performance of “Terrified,” with sick background visuals depicting a woman floating in water, Gambino decided to vibe out with Philly in its final days of summer with one of his Summer Pack hits, “Feels Like Summer.” He then went on to introduce a second new song, “Spirit,” and with hard hitting 808’s and auto tune vocals on the chorus, it felt heavily influenced by two of Kanye West’s songs, “Stronger” and “Love Lock Down,” and the stage began to lift as high the spirits that were inside of the Wells Fargo Center.
As the set wound down, Gambino ordered the crowd to move as the beat dropped to his hard-hitting single “This Is America,” and at that moment, South Philly caught the Holy Ghost. Everyone — Gambino, his young black backing dancers, and the entire crowd — were on their feet dancing and chanting “This Is America!” and “Get yo money black man!” loud enough to be heard in Mt. Airy. A great way to end an amazing night, or so we thought. The crowd’s energy was so high that Childish Gambino returned to the stage for an encore. “Sober”  instantly made the crowd high on his melodies, and Gambino followed with “V. 3005” and  “IV. Sweatpants,” and even took time to shout out Philly’s own Tierra Whack, who was in  the crowd singing every verse along with the many Gambino die hards.
Finally, he channeled his inner Marvin Gaye and Prince and closed out the show with his Grammy award winning single “Redbone,“ electrifying the crowd with mighty falsettos.
Below, check out some fan vidoes from the concert, along with the “Feels Like Summer” music video featuring character designs created by Philly’s own Justin Richburg.
Related Content
View All Related Content