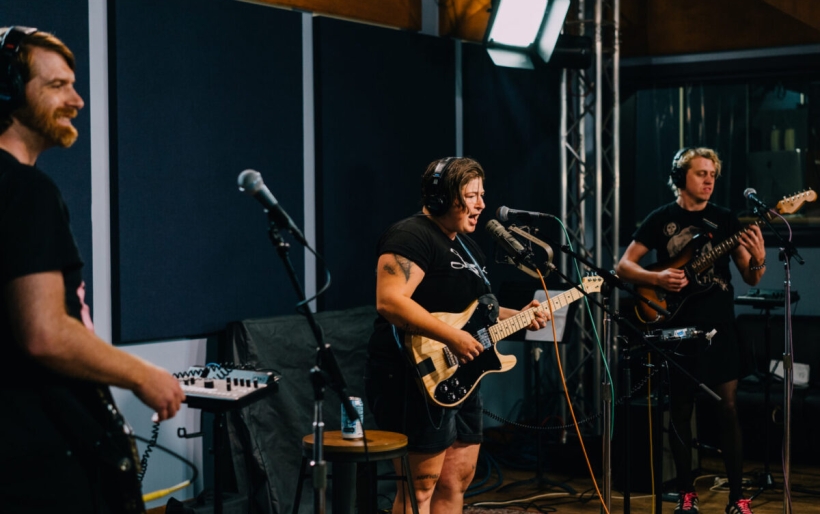 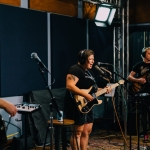 “I was going to tell you what this song is about,” Chrissy Tashjian told a sold out crowd at PhilaMOCA last month, “but you’re smart. You’ll figure it out.”

The jam in question, a two-and-a-half minute rager called “South America” from the latest Thin Lips record Chosen Family, doesn’t require a ton of decoding. It wears its message very much on its sleeve — or rather, in its hook: “And now you’ll go to South A-MER-I-CA / with a woman that you only met last month.” So it’s a very literal breakup story, yes, but the telling of it is much more complex than such a label would imply, exploring themes of incompatibility, impatience, rejection, and unappreciated emotional labor: “let’s hear the line / the one that goes ‘Chris, I’ve never seen you try.’ / The line, the one that goes / ‘All I do is try.'”

I mentioned that its a rager, yeah? In the hands of Tashjian and her Thin Lips bandmates, the story behind “South America” becomes a soaring emo anthem, a song with interlocked instrumental complexity that’s incredibly fun, even as it unpacks personal lows. But that’s what this band has been all about since emerging on the Philly scene back in 2013 with the Gemini Moon EP — Tashjian took the name Thin Lips for her band because she is terrible at keeping secrets, and in their telling, she transforms them into something uplifting and pure.

Chosen Family came out in July on Lame-O Records, and is easily the band’s best project in its five-year existance. It’s a meditation on love and distance; on queer community, finding your people and claiming your space in a hurtful and confusing world. Going further back, it’s something of a culmination of the bandmates’ decade on the Philly scene; the three of them, including bassist Kyle Pulley and drummer Mikey Tashjian (Chrissy’s bro), were all part of the beloved indie pop collective Dangerous Ponies, which musically and aesthetically was very much like a glitterbombed Magical Mystery Tour, if you will. (MMT being the most glitter-y Beatles record to begin with, if that tells you anything.) When that band parted ways, they moved on to a rawer sound with the early Thin Lips releases, particularly 2016’s appropriately-named Riff Hard.

On Chosen Family, we hear a marriage of that knuckle-tatted punk and the airy complexity of orchestral pop, and we hear stories that are moving and deep. Four of its songs appear in this session: in addition to “South America,” there’s a beautiful performance of “A Song For Those Who Miss You All The Time,” which addresses the grieving process and, more specifically, the passing of the Tashjian’s younger brother Billy, but through an uplifting rest-in-power lens. “So Stoned” is not about weed, but rather about anxiety; “Gaslight Anthem (The Song Not The Band)” is, in addition to being one of the best song titles of the year, a terrific set kick-off as it breaks down the process of coming to terms with the person you used to be and the person you’ve become.

For this performance, Thin Lips is joined by touring guitarist Curtis Cooper — an awesome Philly musician in their own right —  which allows the band to expand beyond the power trio format, incorporating dueling licks, vocal harmonies, and extra energy. You can watch the four of them in action in the “South America” video above, you can hear them in the full session below, or experience them in person this Saturday night, September 22nd, when Thin Lips co-headlines the basement of the First Unitarian Church in a duel record release party with Shannen Moser (whose new album I’ll Sing is also quite beautiful). Tickets and more info on the show can be found at the XPN Concert Calendar.

PRODUCER’S NOTE: This week’s Key Studio Session was recorded when a newly-installed mixing board in the XPN studio was working through bugs, unbeknownst to the engineering team. We’ll spare you the technical explanation behind it, but if you notice sounds in this week’s recording that sound like vinyl surface noise, that’s what you’re hearing. We cleaned up the mix as much as we could, and ultimately decided that the asskickingness of this performance by Thin Lips outweighed its audio shortcomings — though we apologize for them all the same! Rock out y’all.