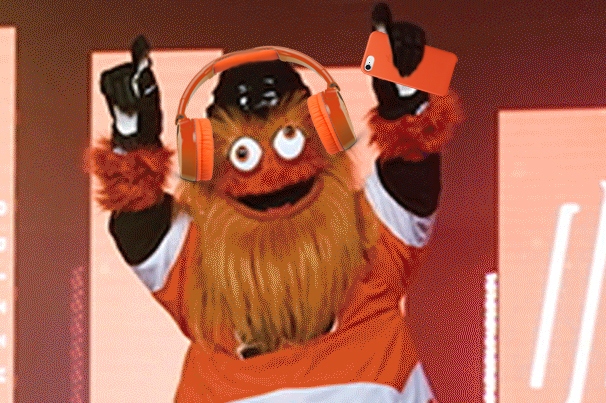 A Very Gritty Playlist: What is Philadelphia’s favorite freak listening to?

In an incredible dose of irony, the most unifying thing to emerge from this dumpster fire of a week is something that looks like it crawled out of an actual dumpster fire.

Gritty, the googley eyed dust mop you see above, went from being universally mocked upon his debut as the newest mascot in the NHL, to being universally memed by thousands of folks with Photoshop and free time, all the way to universally beloved — at least in his home city. I mean, the best donut shop in Philly is selling a limited edition Gritty glazed today, and a Bristol brewpub reportedly already has Gritty beer on tap (although, those familiar with the lengthy brewing process realize this is either opportunistic marketing of a beer already in the works, or something coordinated with the Flyers long before the announcement).

So many questions about this character. What is he, exactly? What are his recreational drug preferences? Does he have a good relationship with the city’s other dayglo colored fuzzy sports freak, the Phanatic? And here at The Key, we’ve been pondering a big one all week — what music does Gritty rock to?

We already know that he’s a fan of The Roots. Our friends at the Serious Rap Shit podcast speculated that “he went to every Motörhead concert in ’78,” followed around the Grateful Dead, and kicked it in cyphers outside La Tazza in 2001 (listen here at the 40 minute mark). Immediately after the announcement, Pat Hickey of the band HOUND made a dozen Instagram videos of Gritty making his entrance to everything from Korn to Hop Along. And for devotees of the DIY scene, this Tweet could not possibly be more perfect. This Saturday, we took a few minutes to speculate about what else could possibly be on Gritty’s playlist. Read and listen below, and comment to let us know what YOU think Gritty is listening to.

We’ve got no doubt that Gritty appreciates the breadth of his hometown homies’ catalogue, which often skews midtempo to mellowmyman. But when he’s getting pumped to take the ice for a big game, chances are he flips on this 24-second jammer where The Roots channeled Bad Brains on their 2002 album Phrenology.

For most of his career, Ye designed his songs with stadiums in mind, and between its horrifying snarls, choppy vocal samples, racing rhythm, and that firey Nicki Minaj verse at the end, “Monster” finds Gritty in all his glory.

It’s hard not to imagine Gritty in one of Rodney Anonymous’ more famous paranoid monologues, but the question remains: is he the title character quietly listening with empathy or the homophobe conspiracy theorist shouting about martian invasions?

Gritty absolutely DNGAF, and these are two songs from the ranks of 21st century hiphop that embody that with a vengeance.

We imagine that Grittys cranks this proto-metal jam in the bus on the way to the stadium. Maybe he pulls the window down, sticks his head out the window, makes the devil horns with his hands and headbangs, terrifying and delighting other drivers on the highway.

This, we’re certain, is Gritty’s dang ANTHEM. Not just because it was famously used in the opening credits of Freaks and Geeks (a title that possibly embodies the dualty of Gritty), but because of the way we saw its lyrical stance in action this week. People have nasty things to say, but who cares? Gritty is gonna do Gritty. Rock on.