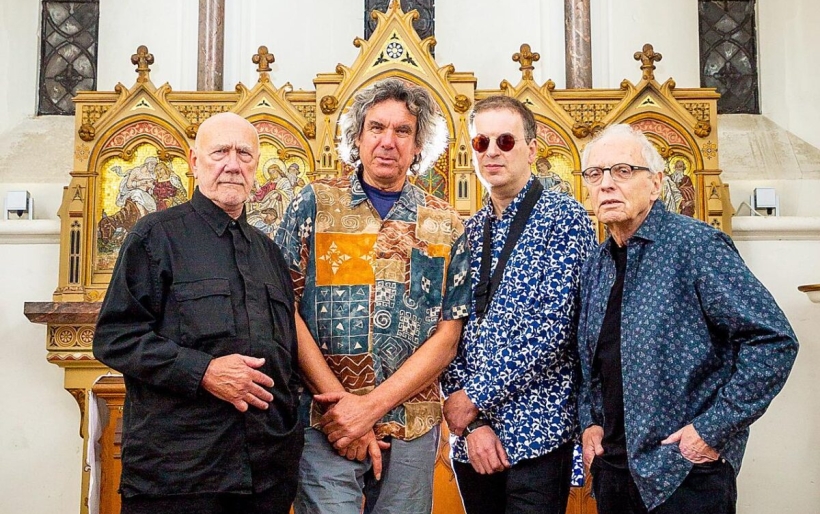 Soft Machine | photo by Geoff Dennison | courtesy of the artist

Welcome to the Machine: Soft Machine find a contemporary feel ahead of their TLA gig

You can’t truly discuss ‘progressive rock’ in Britain unless you discuss Soft Machine. And you can’t really celebrate its currency until you hear its new album, Hidden Details, and see them in action at Theatre of Living Arts on October 7.

Born of the same Canterbury scene that gave rise to the dark earthen folk rock of Fairport Convention, and nicking its name from a William S. Burroughs title, Soft Machine commenced in 1966, with Robert Wyatt (drums, vocals), Kevin Ayers (bass, guitar, vocals), Daevid Allen (guitar) and Mike Ratledge (organ), and immediately formed its fusion jazz mad vibe, while making its most eccentric players stars. Well, minor stars – this was the avant-garde, mind you, and while Allen and Ayers have passed away, it is not as if Wyatt gets mentioned in the same breath as those who followed: say, Peter Gabriel, or Jon Anderson (though one-time Soft Machine guitarist Andy Summers did gain traction and cash as a member of The Police).

“Technically I have been in soft Machine for 43 years,” said guitarist John Etheridge. “But you must remember that between 1980 – except for 1 week at Ronnie Scotts in 1984 – until 2004, the band was effectively moribund, though not dead.” He’s been part of Soft Machine since 1975, only slightly less long than drummer John Marshall and bassist Roy Babbington.

Ask him if has been a blessing or a curse to be celebrated (or stuck) in Soft Machine’s ever-circling membership hell, and Etheridge claimed, “It’s a real blessing that it has been revived…but perhaps if we had actually been slogging away on the road for 43 years, it might have seemed like a curse. Every one gets on so much better after the long break.”

Etheridge got the gig in the guitar Soft seat from Allan Holdsworth — who eventually gained notoriety for his own work in U.K. with Roxy Music / King Crimson bassist turned vocalist John Weston.

“I ran into Allan in a guitar shop, after I had only recently finished a stint with Wolf violinist Darryl Way, from which I’d got a nice bit of attention,” said Etheridge. “He asked me what I was doing…I said ‘nothing much’ and a week later he’d gone to USA, leaving my number with the Softs. Which was great, as they would not have known me. They were more in touch with the jazz players, not the prog people – I guess I was one of them at the time – so I’m very grateful to Holdsworth. At the time I didn’t know much about the history of the band, but was knocked out to be playing with John Marshall and Roy Babbington, who I’d admired for years. Now that I’ve spent time as a Soft, I personally am more appreciative of Ayers and Daevid Allen now, as I’ve investigated the legacy of the old band more.”

Considering that legacy and the line that Etheridge followed, as he first joined to promote the Bundles album (which featured Holdsworth), he followed a similar virtuosic path for that tour. “My mode of playing at the time was definitely full on jazz rock, something I’d been developing for a long time, inspired by early John McLaughlin, so although it was an enormous challenge to follow Holdsworth, I felt I was the right man for the job.”

But, Etheridge feels very strongly about Soft Machine 2018, in that they cover way more ground than the 70s-era ensemble. Yes, SM 2018 refer back to the ethos of the Allen/Ayers/Wyatt/Ratledge era, (“which was excluded when I first joined…our current level of free Improvisations would never have happened then”) and with an extended sonic palette that brings together the atmosphere of all the previous Soft Machines. “The only thing we don’t do are the vocals.”

Having also played with jazz violinist Stephane Grappelli and easy-on-the-ears classical cats such as violinist Nigel Kennedy and guitarist John Williams helps Etheridge’s work within the Soft Machine. “I have a much broader perspective on music, and what constitutes valuable music, than I did in 1970s. Also it keeps me humble. Having played with the greatest jazz violinist and the greatest classical guitarist and one of the world’s greatest classical violinists, I can’t possibly be complacent about what I do.”

Etheridge and Co. were keen to rekindle the Soft Machine flame as it enabled him and the rest of the cast to reconnect with modes of playing they each loved in the 70s and had found difficult to replicate in other contexts. “The atmosphere of this band is so free of genre restriction,” stated Etheridge.

“We can take the music anywhere…sometimes futuristic, other times retro-ish. I got so fed up with the boundaries that became very defined in the 80s.” The guitarist refers to the title track of the new album for easy immediate reference, one where its central sonic theme has a vintage prog / Soft 70s vibe with a potent rush of adrenalin in his solo bit. “It’s grungy in feel and the drums and bass are mobile and angry,” he said proudly. “I really like it.”

“The entire new album has so much light and shade,” Etheridge continues. “We have four or five formal compositions, some free improvisations, some improvised solos and some group blasts! There is no restriction on style, so some is quite tender, some quite brutal.”

And now, Etheridge & Co. can bring that same light, shade and brutality to the U.S. for the first time in over 40 years. “Yes, this is the first Soft Machine tour of the US. since 1974…Marshall and Babbington were there then. It’s definitely about time for me. Soft Machine has was definitely more potent in Europe since that time, but we’re coming to win you over.”

Soft Machine plays the TLA on Sunday, October 7th. Tickets and more information can be found at the XPN Concert Calendar.