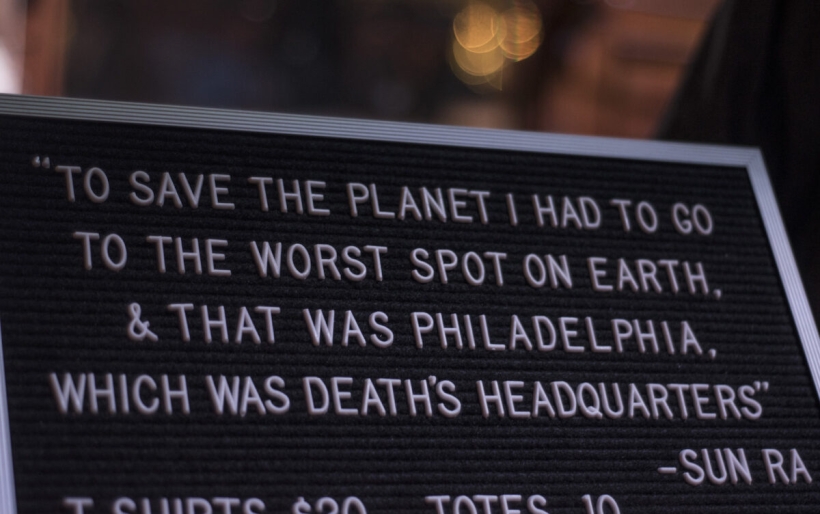 The Skeleton Key: October is haunted with thrift store discos, horror flicks in cemeteries, and gigs from Swearin’ to Sun Ra Arkestra

“This year Halloween fell on a weekend and me and the Geto Boys were …” Wait a minute! Halloween isn’t on a weekend this year! But even when it falls on a Wednesday I’m still more excited for Halloween than just about any other day out of the year. It’s not just the special, yearly concerts – Dead Milkmen, Sun Ra Arkestra, all the cover shows happening around town – though that’s a huge part of it. Halloween is this huge celebration of the weird and the wonderful, an excuse to dress up and have fun and get real obsessed with ghosts. And there’s really no better city for Halloween than Philadelphia, which embraces the holiday the second the clock turns midnight on October 1st.

Welcome to the Skeleton Key, your monthly DIY calendar and column here in The Key. Let’s get spooky!

So let’s just say that you, like me, are very excited about Halloween but unlike myself you haven’t figured out your costume yet. Do what I always do and head over to Philly AIDS Thrift and wait for a good idea to jump out at you. Bonus: tonight is the WKDU 91.7FM Electronic Music Marathon Disco Broadcast Party at PAT so you can do double duty and scope out a costume while getting down to some rad tunes for a good cause.

Two quick points for the sake of clarity: I am a DJ at WKDU and even though I’m not participating in the marathon this is very much blatant self-promotion. The EMM is in its 15th year and I’m beyond proud of the work all of the organizers have done to make the four day fundraising event – this year the money is going to the AIDS Law Project and The Attic Youth Organization – a fantastic success every time.

There is so much happening this month that I’m pretty sure you could go to a show or two every night if you wanted to. On Monday you can head over to the First Unitarian Church to welcome home Sheer Mag after their couple week jaunt through Japan or you could stop by the Philadelphia Record Exchange and see what might be one of the most underrated shows of the month, Bill Nace (currently one half the brilliant Body/Head with Kim Gordon) and tape collage maestro Graham Lambkin. Read more about Lambkin in this recent Bandcamp piece and be like me and try and go to both shows.

Similarly on Tuesday you have the choice between the fantastic Nnamdi Ogbonnaya at PhilaMOCA and Austin’s Charalambides at Vox Populi with Fursaxa. If you’re not familiar with Charalambides, you should be. They are one of the most fun and interesting psych bands of the past 25 years and have put out albums on everything from Philly’s own Siltbreeze to Kranky and the band’s own imprint Wholly Other. They have a new double LP coming out this month and haven’t come through Philly since 2007 and so this is truly a must-see show. You know, assuming you don’t want to go be wowed by Nnamdi, Options, and Shelf Life. Decisions, decisions!

Wednesday your options are Swearin’ and their brand new album on Merge Records (!) with Empath and Big Nothing at the Church, Gruff Rhys from Welsh pop superstars Super Furry Animals with Scottish singer songwriter Lorkin O’Reilly at Johnny Brenda’s, and the always awesome Full of Hell bringing their heavy, heavy sound to Voltage with Outer Heaven and Sunrot. Not only have Full of Hell done collaborations with The Body and Merzbow, but last time I saw them they had a trumpeter playing harsh noise honks through a maze of pedals. It was incredible.

Thursday at PhilaMOCA is the first show in a long time for Swanning, which is Cynthia Schemmer from Radiator Hospital’s solo-ish project. She’ll be playing with The Goodbye Party and Yowler, who is releasing her brand new LP Black Dog In My Path this month on Double Double Whammy, also home to Frankie Cosmos, Florist, and more. Kyle Gilbride, who recorded Black Dog and played on it, is having his usual incredibly busy existence: not only did Swearin’ just put out their first album in five years but he recently announced that his solo project, Missing Earth, will be having a physical release of their debut coming out in November.

Alright, enough about music. Let’s talk about what really matters this month: watching horror movies and hanging out in cemeteries. You have multiple chances to do both between now and Halloween and I’d recommend you take advantage of that. You can start on Thursday the 11th with a double feature at The Rotunda of The People Under The Stairs and Get Out. The very next night is a Buffy the Vampire Slayer triple feature in Woodland Cemetery! How much more Halloween can you get?!

They say it can be rough to be born in December because everyone has better things to celebrate than your birthday. If that’s the case, I would hate to have been born in October. Still, a couple Philly musicians are trying hard to compete with the Halloween revelry by throwing some wild birthday shows. First up is Pat Graham’s at Space 1026 on the 12th with Tact, Eight, Yankee Bluff, and his own band Big Nothing. A decade older – and a week later at The Fire – Dandrew Stevens from The Dead Milkmen is celebrating his milestone birthday with outer space rockers STARWOOD, F. Woods and The Fellow Humans, and solo performances from Joe Jack Talcum and Rodney Anonymous. Happy birthday, y’all!

That next week is just as jam-packed as the one before. Sunday the 14th is the return of the mighty Drunks With Guns at Ortlieb’s with Storks, Rubber, and Tom Lax from Siltbreeze DJing. I say return like the St. Louis noise rockers came through Philly during their original run from ’84 to ’90, but I’m almost 100% sure that this is their very first time in our city. I’m excited to catch Storks, which is a new band with members of Strapping Fieldhands and Watery Love. This isn’t the only legendary punk band playing at Ortlieb’s this month: come back exactly a week later for the Urinals who were the poster children for freaky, weird punk 40 years ago and by all accounts haven’t changed one bit.

Two days later Public Image Limited is at Union Transfer and Radioactivity at Boot & Saddle. Johnny Rotten fans take notice: on the 29th there will be a showing of the new documentary The Public Image Is Rotten at the Ritz Five. Does anyone remember when John Lydon was in Philly in the summer of 2000 to cover the Republican National Convention for MTV News? I saw him waiting patiently at a red light right by Love Park and heckled him for not jaywalking. True story!

The very next night at the Fleisher Art Memorial is a very special edition of Secret Cinema, Jay Schwartz’s ongoing series. From Philadelphia With Love: Industrial, Educational and Other Lost Local Films promises, “rare 16mm prints from the Secret Cinema archive about different aspects of life in the Philadelphia region. Some were made as sponsored films promoting goods or institutions, and others are educational, documentary or dramatic in nature.” The program includes a short newscast from 1967 about the painter Andrew Wyeth, a tour of the city filmed in the 1940s, and an educational film from 1970 called Harlem Renaissance: The Black Poets that was actually shot in … North Philly.

The first Halloween show on my calendar is on the 21st at Boot & Saddle. You might think that’s a bit early for a Halloween show but I think you’re wrong. Hosted by Black Dog Gallery and featuring music by Yuckmouf, Wrists, Haunted Homes, Alula, and X88B88, the event is also an art show and costume party. Oh, and it’s just $5 so really what excuse do you have for not going?

John Carpenter has been the mastermind behind so many incredible horror and science fiction movies over the past almost 50 years. In just a five year period from 1978 to 1983 he helped make Halloween and two sequels, The Fog, Christine, Escape From New York, and more. That’s just amazing. And he wasn’t just directing and producing: most importantly for this column, he’s also composed the music for many of his films. His synthesizer-heavy soundtracks are beautiful and occasionally truly eerie, very much setting the scene.

All this is to say that if there was ever a time to watch a John Carpenter movie it’s in October, especially if it’s broadcast on the big screen with a good sound system. Thankfully cineSPEAK, which has as its goal “bringing the under-represented + eclectic to the forefront of the Philadelphia cinema scene,” is hosting a screening of one of my all-time favorite science fiction films They Live at Everybody Hits on the 25th with synthwave band Night Drive playing after. I can’t imagine a better way to usher in the week of Halloween.

The very next night the fun continues over at PhilaMOCA with a presentation and discussion about heavy metal and the Satanic Panic of the 1980s by author Grady Hendrix, who visited the macabre-loving venue to talk about horror novels last October. His latest book, We Sold Our Souls, is the fictitious account of a heavy metal guitarist digging deep into the conspiracy-crazed underworld.

The Dead Milkmen are a band that seem obsessed with conspiracies. “Peter Bazooka” is my favorite – especially that awesome video that was shot all around the city! – but there are so many others. I mean, they have a track that’s literally called “The Conspiracy Song” and they put out the Welcome to the End of the World EP last year. What else do you need? Go see the band play on the 27th at the TLA and ask Rodney Anonymous about his favorite conspiracy. I’m sure it’s a good one.

I might have started this column with a reference to a really fun and hilarious Atom and His Package song but let’s be honest here: the absolute best Halloween music is the kind of stuff that invokes the mystery of the season. That can be just in how something sounds – while nobody ever accused DJ Jazzy Jeff & The Fresh Prince of looking or acting evil, “A Nightmare On My Street” is a classic Halloween track – but the physical aesthetics totally help. If you need a good example of this, come to the Fillmore on Mischief Night to see extreme metal pioneers Behemoth play with the always entertaining Wolves in the Throne Room.

Finally on Halloween night is the now-annual Sun Ra Arkestra performance at Johnny Brenda’s. Come out to see 94 year old Marshall Allen lead the band through what promises to be one of the best performances of 2018. And remember to wear a costume!