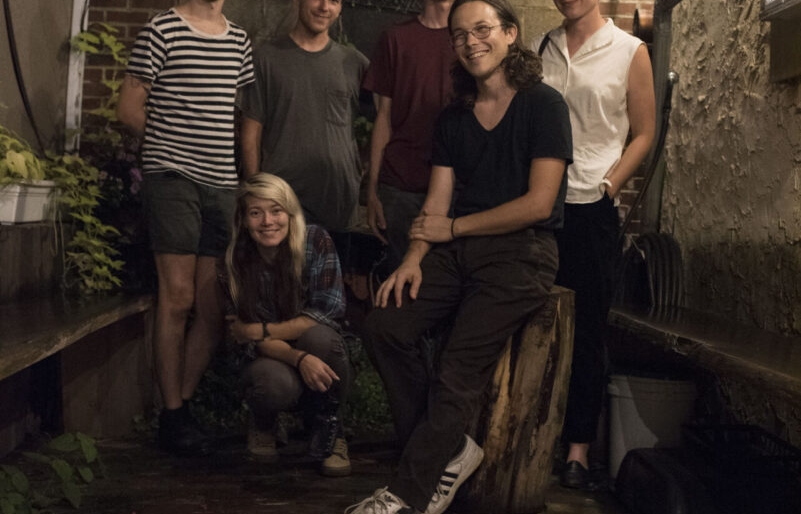 Hour | photo by Julia Leiby | courtesy of the artist

It’s tempting to call Philadelphia instrumental six-piece Hour “quiet as a kitten,” but that statement would be wildly inaccurate. Kittens might be tiny, but they can get loud when the situation demands; Hour, by comparison, seems intent on making as little sound as possible, at least as far as last year’s Tiny Houses LP is concerned.

That seems to be changing with the latest song from the band’s new LP Anemone Red. While the album’s initial teaser track — do instrumental bands have “singles”? — mostly traversed similar territory as their debut, the vividly-titled new “At the bar where you literally saved me from fatal heartbreak” is vibrant and alive with a pattering drum rhythm and interlocked guitar interplay, evoking a beautiful and emotional scene over seven and a half minutes.

Make no mistake, this is still quiet stuff. But while Hour previously seemed like an experiment in how-minimal-can-you-go; here it feels present, brisk, and almost film soundtrack-y in the spirit of American Analog Set, The Album Leaf and Low.

When the song premiered over at The Line of Best Fit, the band’s Michael Cormier explained its evocative title:

“‘At the bar where you literally saved me from fatal heartbreak’ was a text message I received from a friend earlier this year remembering a night we spent at the Institute in Philadelphia, whose bright neon red sign and dimly-lit interior make for a good backdrop to console someone experiencing a turbulent and fluctuating relationship. This song and the others on the record exist at that anticipatory point right before the degradation of relations. Electric guitar and classical guitar parroting one another in imperfect unison reflect the feeling of being out of step with another person.”

Listen to the song below; Anemone Red is out November 2nd on Rochester label Lily Tapes and Discs. Hour plays its release show for the album at Beacon in West Philly on Thursday, November 8th. Tickets and more information can be found here.