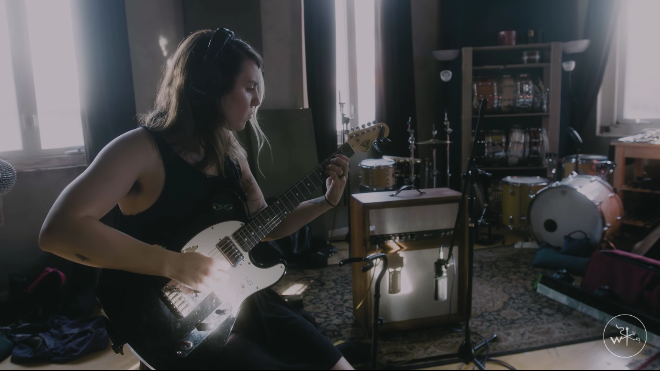 Philly indie rockers Ellen Siberian Tiger are the focus of the latest Shaking Through session from Weathervane Music. The group, helmed by songwriter/vocalist Ellen Tiberio-Shultz and performing as a four-piece for this session, joined the Weathervane folks at Miner Street Recordings to put together a finished rendition of their previously unrecorded song “Everybody Always.” The final product is out now, and includes a polished music video of the song and a documentary-like look behind the scenes into the process of recording.

In the interview portion of the documentary, the band talks about the technical elements of writing and recording, but also goes in depth about the things that influence their songwriting. Tiberio-Shultz discusses what it’s like being the creative leader in a collaborative environment, and how they channel identity and emotions through Ellen Siberian Tiger’s music. “Everybody Always” is a song that reflects a recent effort to process anger in a healthy and productive way, says Tiberio-Shultz. The songwriter tells Weathervane:

“For me, it is important that since I’m on stage, I think about what I say and how it does affect people. [Recently], I’ve been trying to focus on anger. My goal is to make those things healthy — productive rather than destructive, because I think anger is a healthy emotion. I think we should be angry, there’s a lot to be angry about, but I think it’s what we do with that anger that matters.”