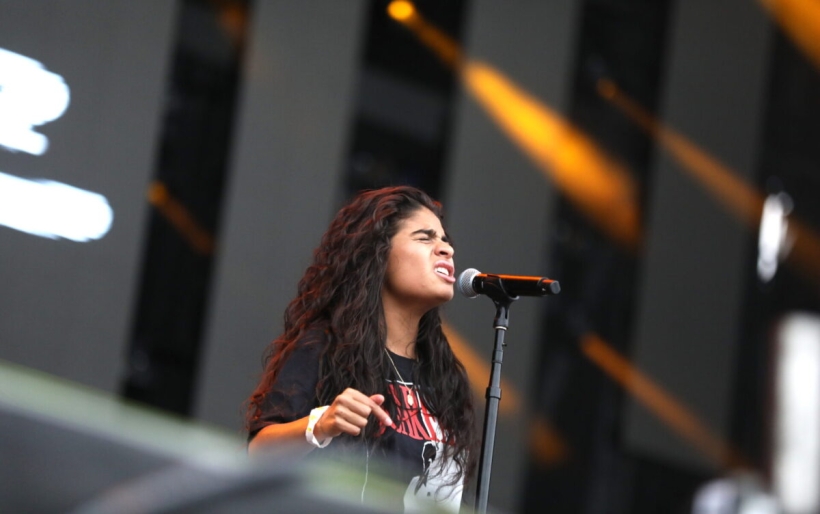 If you want to look at a moment of definition in one’s career without DEFINING one’s career, it came for shushing singer and frank-as-fuck songwriter Jessie Reyez during her performance at the Made in America festival in Philadelphia over Labor Day weekend. The whole crowd watched and sang along with her every song as she stalked the stage in cut off shorts and a Scarface t-shirt (the movie, not the rapper). Just a few nights earlier, the Canadian-Colombian folk-rap singer had turned in bolt-upright electrifying performances at the VMAs, and on the night previous to MIA landed on Eminem’s surprise album Kamikaze, which features Reyez on two songs: “Good Guy” and “Nice Guy.”

That was but one of Reyez’s perfect storms.

“Oh man, you can say that,” she laughs. “That moment was surreal. Thank God I have a great team that has been working its asses off, because we’re just all moving so fast. Sometimes, you barely get a chance to appreciate what is, you know? It is difficult to stop, and take it in, because everything is ‘go go go.’ No sooner than I get a moment… I’m pulled into the present.”

It’s damn good present to be yanked into,  Her soul star has risen rapidly within the last two years, due to her 2017 Kiddo EP, her high-profile live performances and guest spots with Calvin Harris, and A Boogie Wit Da Hoodie, and now, a new EP, “Being Human in Public,” which should establish her thoroughly as THE go-to deeply revealing, imaginatively conscious, funky songstress of our moment.

Does she even remember why and how she started singing in the first place? Before she hit this moment running? “Hell, yeah I do. It was purely because of a reflex, something that was natural. For me to have angst, or something inside, and then have it come out on paper. That was the initial experience for me, having that just happen.

“The reason I wanted to make it big, big and bigger is for my legacy,” she continues. “Because I want to make my life more than music, much more than music. I want to make sure that when I had my opportunity to make the world better, that I did what I can. That I did something. Now, getting all that done and doing that good is something I’m trying to fucking figure out right now, you know?”

Struggle. Making wrong right. Going after the predatory men in the record industry who assaulted and harassed her: that’s a deep and smart part of her confrontational lyrics on everything from “Fuck Being Friends” to “Body Count.” Reyez has had a sense of the confessional about her long before song writing, as she wrote poetry as a kid. “I think I was 10, grade 3,  I think those same words only became good when I isolated them into something musical and focused on them. They were cool, but I didn’t feel as home with my words until I made songs out of them.”

As potent as her words became through song is how dramatic (“and surprised”) she sounded when she put those phrases to music. “I’m not even sure how I got to that.” What she does know — or is acutely aware of — is how she has evolved since first making records, and how that impacts on the drama of “Being Human in Public.”

“I have made it a point to sharpen the things that I knew back then to something finer, how to deliver the messages more directly, how to make it more physical, more cinematic,” Reyez says. “I don’t know though if I have evolved, because I have always strived to be fucking honest.”

Jessie Reyez plays Union Transfer on Tuesday, November 20. Details on the show can be found at the XPN Concert Calendar.