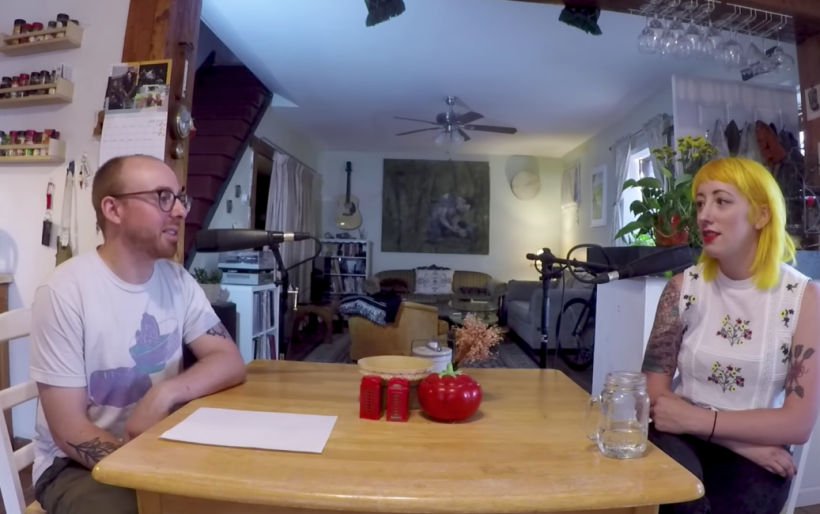 Tom May and Augusta Koch | still from video

Tom May of Philly punk band The Menzingers has a new approach to podcasting — for his latest project, he’s sitting down in his kitchen for casual, unstructured conversations with his friends and peers in the music scene. For the inaugural episode, May is joined by Augusta Koch of local outfits Cayetana and Gladie, who he describes as one of his oldest and dearest friends.

In the half-hour episode, the two musicians about everything from the perils of social media (Pinterest and Reddit are their mutual favorites, whereas LinkedIn is the “dark web”), to the advent of technology like Amazon Prime, to the confines of space and time, prompting Koch to tell her best deja vu story. The latter half of the podcast moves into a discussion of Koch’s recent artistic endeavors, which include making stop-motion videos and helming her new band Gladie alongside Matt Schimelfenig. She’s currently at work on the band’s debut record, after releasing an EP earlier this year.

“It’s been nice to make some different kinds of art,” Koch says of her current projects. She talks about how she’s always been an artistic person, but got into music only after years of supporting her musician friends and finally thinking, “I can do this, too.” The two musicians talk about how music is for everybody and that there’s no singular way in which a person learns it, and both agree that they couldn’t see themselves doing anything else. “What if I couldn’t have crazy hair?”, Koch wonders, cringing at the thought of having an office job.

Watch below or listen to an audio-only version here. The Menzingers play a sold out show this Saturday, Nov. 24 at Union Transfer, and Gladie opens for Tigers Jaw on Dec. 27 at The Fillmore. Find more information on both shows at the XPN Concert Calendar.