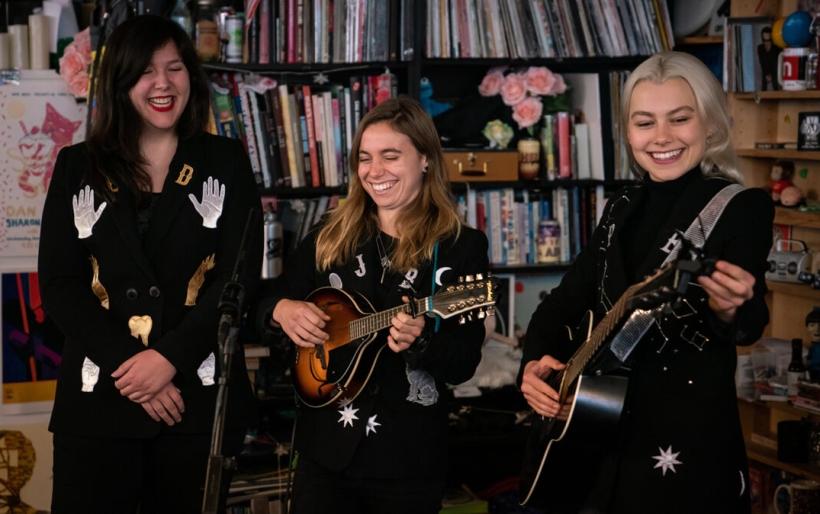 We can’t get enough of boygenius, the new collaborative project from singer-songwriters Lucy Dacus, Julien Baker and Phoebe Bridgers, so their recent appearance at NPR’s Tiny Desk almost makes up for the fact that the trio’s tour skipped over Philly. Decked in their band uniform of matching embroidered jackets, the group shares a single microphone in the tight office space, performing stripped-down versions of three songs off their new self-titled EP.

The three musicians let their soft harmonies, which have quickly become their signature sound, shine through on each of the deeply moving songs. Baker, on the mandolin, kicks things off with “Souvenir,” followed by the extremely catchy Bridgers-led “Me and My Dog,” pausing in between to tell a few “wholesome jokes,” though they admit that humor’s not their forte. The trio closes with “Ketchum, ID,” which sees them trading off verses that tackle their collective feelings about life as a touring musician and fantasize about a new life in Idaho.

This wasn’t the first Tiny Desk experience for any of the members of boygenius — each musician has recorded their own concert; Baker’s done two of them. NPR’s Bob Boilen brought that fact up during the recording, writing:

“So when the usual nerve-racking session was over and I shouted out, ‘So, is it any easier the second or third time?’ I had to laugh when I got a resounding ‘No!’ from all of them. The notion of playing in broad daylight in an office, without having your voice coming out of a PA, and an audience close enough to touch, is not only intensely intimate but also intimidating.”