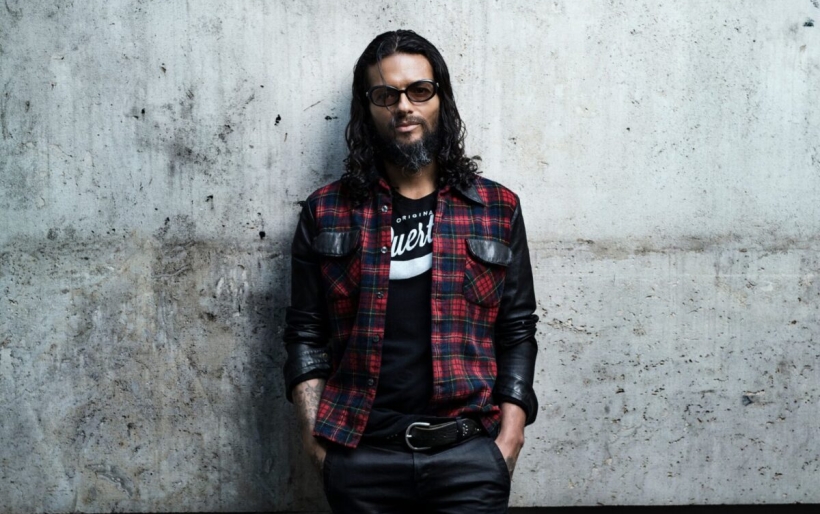 Draco Rosa | photo by Monte Sagrado | courtesy of the artist

The only thing that matches the pleasure of speaking with Draco Rosa is listening to him, and his various shades of haunting sound across a three decade spectrum. If you don’t know him from his goth-tinged rock en espanol albums such as 1996’s Vagabundo, 2004’s Mad Love, 2013’s Vidam — or his new, epically psychedelic and metallic Monte Sagrado that brings the American-born, Puerto Rican artist to The Foundry November 28 — you know him from the 1990’s alterna-funk outfit, Maggie’s Dream.

If these passionately aching, and smartly conceptual albums have shamefully alluded you, there are smashes (“Living La Vida Loca,” “Maria,” “She Bangs”), that Rosa has co-written and/or produced for his pal, Ricky Martin, with whom he shared a tenure in the multi-platinum, Latino boy band, Menudo. Along with all that, Rosa is a coffee entrepreneur and farm owner, an activist, a cancer survivor and a cookbook author.

Phoning from Las Vegas rehearsals for last week’s live Latin Grammy Awards, Rosa sounded hale and hearty for a guy who had his second bone marrow transplant and beat cancer’s ass — for the second time in his life — earlier this year. Talking about his still-famous Vagabundo album, and the image it portrayed of a mechanical journeyman griot, Rosa said the half-man, half-machine was important for him as he strived to leave the shadow of Menudo. “I strived to become respectable as a songwriter and producer, and along the way, that image represented a period of fun and a means of freedom,” he said. “Musically, lyrically, it may have had many hurdles from the label – who didn’t like Vagabundo – in trying to promote it. But once the culture shifted, and that album was a awarded a sort-of cult status, from there it became a more interesting game for me.” Though that album’s rewards were skint in terms of sales and respectability, initially, Rosa says, on a personal level, that as an artist, “your very best travelling companion is risk.” And he likes to travel (on a humorous note, he rereleased the album on his own in 2016, but not without further indignities of its original art work gone missing. “Man, they really didn’t like the album,” he said with a laugh).

The man-machine metaphor of Vagabundo also extends itself to the new album, and to the musician with an iron will and a lust for life who has made himself the product of stem cell operations (“I could be a cyborg… look where we are today, where we are headed medically, in terms of AI and VR”) that represents longevity. “There’s some transhumanism at work for sure.”

What Rosa can’t stop, no matter how superhuman, is the tragic tide of events such as Hurricane Maria and Hurricane Trump that has fallen upon his people and his Puerto Rico. “When you’re in mourning, the Puerto Rican flag is red white and blue. And now, it is black and white on the cover of Vagabundo (to comment on) our situation as a country.”

As Monte Sagrado began its recording before the hurricane and before his second cancer, what is on shelves and Soundclouds now is not the same record that he started with in 2014. “I had more energy in April, I got a little more wild. Played around with pedals. I took the risk and played upon that energy. And I love this album. And here we are today.” Energetic as he is and the music of Monte Sagrado is, its lyrics and mood are bathed in the melancholy of his favorite artists (the dark poetry of Jim Morrison and The Doors), but even more so, the deep reds and blues of a man in psychic struggle with himself.

“Melancholy is the backbone of everything that I do, and that I am,” he said, softly. “That’s a double edged sword. But I am here to tell you now that I am managing my melancholy. It used to get the best of me. It used to take me down. The cancers got me down, But, in my worst hour, I was able to move aside my worst fears and doubts, and embrace life again. I’m here today because of that.”

Going back to the start of the conversation, Rosa focused on the journey from Menudo – the ultimate made-up boy band that he and Martin were a part of, whose membership shifted repeatedly after their leave – to becoming a solo artist, not with feigned regret or phony embarrassment, but joy. “I loved it. I loved it so much that I wanted to write songs. I loved it so much, I was able to give it all up, and step in to the void.” The “Menudo thing” was powerful, and to walk away from, a hard road to hoe. “Life was tricky many times, and I was young emotional and wild. Was I disappointed, saddened and upset at suddenly having to leave one thing to do another? You bet. Absolutely. It’s been a hell-of-a-ride. Expressing yourself is tough. And it’s not until this album – 13 albums later – that I could look at my career and my art with clarity, and see how I came in, and where I am. I have not always been able to say that.”

If you want to get the fullest flavor of Rosa’s career, and where it is presently, Draco suggests the clattering “333” from his new album. During a video filled with sinister comix elements drawn by his son, Revel Rosa, the multi-instrumentalist, composer and singer claims that its music took him back to his start. “Day one. Pre-Menudo. Caribbean coast. Surrounded by my posters of The Doors and The Who. When I hear that vocal on ‘333,’ I can hear how in IT I am. What a great performance. I’ve never been so deep in it, and I have never been so happy to be there. Not one syllable is wasted. F*ck yeah.”

Draco Rosa performs at The Foundry of The Fillmore Philadelphia on Wednesday, November 28th. Tickets and more information on the show can be found at the XPN Concert Calendar.