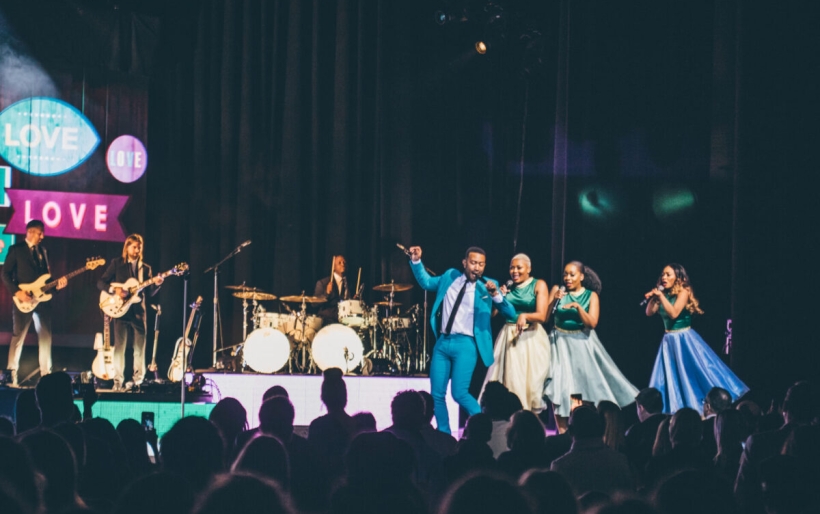 John Legend is corrrrrrrrrrrrrrrrrrrrrny. That’s a compliment when it comes to doing Christmas right. At least in the manner in which he — the one-time University of Pennsylvania student/singer — has this season: giving modern R&B heft, humor and sensuality to a Nat King Cole sense of savoir faire for everything from last week’s NBC TV special, A Legendary Christmas with John and Chrissy (Teigen, his model/actress/author wife), to a holiday album of newly-penned and classic carols with A Legendary Christmas, to this Christmas-themed gig at The Met Philly.

The Tuesday evening concert, in the bitter chill, no less, was part of the opening week of Live Nation and North Broad Street’s newest, most dramatic entrée into the venue scene: an old one, all 110-years and $56 million dollars’ worth of rejuvenated proscenium arches, gold leaf rosettes, mezzanines and large scale stages and sightlines. The high-and-wide A Legendary Christmas Show utilized every inch of The Met’s gilded 94 foot-wide stage as a large scale band with horns and backing vocalists accompanied Legend, all playing before a mod, geometric design-heavy backscreen presentation of seasonal motifs. Starting the show (and ending it), was the boldest giveaway as to what was coming for the next two hours: a black-and-white film of Legend, nattily dressed and staring smilingly into the camera, singing Cole’s “The Christmas Song,” for the family and for the season.

Screen up, and in came Legend & Co, dressed to the nines, swinging into Stevie Wonder’s boppity “What Christmas Means to Me,” before steamrolling into a Donny Hathaway-ish “Silver Bells.” Immediately, you get the feel that (like their television special), Legend has stepped into old school variety show fare. While that can often be a schmaltzy thing to pull off well, Legend did so with just the proper amounts of kitsch and dignity. There were flashy stage backdrops that read “The Johnny Legend Show” or “Welcome to JL’s Juke Joint” that set the mood for soulful and bluesy traditional takes on “What Christmas Means to Me,” “Please Come Home for Christmas” and “Merry Christmas, Baby.” After the funky holiday AM radio traditionals rolled by, Legend went hard on his own newly-penned originals such as the grand piano ballad “By Christmas Eve,” and the Motown-ish “Bring Me Love.” All of this, by the way, was executed by a voice that’s open, quavering and soulful, and without an ounce of extra fat. The background singers fought for Legend’s attention as part of their schtick. Plus Legend told jokes, like about playing football with his fam during Christmas dinner day while growing up. Legend was charmingly affable, and this was a holiday dinner theater show without the ham. OK, some ham.

Though he started with the Yuletide cheer, camp and song selection, Legend & Co, didn’t stick there. The same deeply soulful, loud and vibrant voice he brought to Christmas tunes stuck to his own bump-and-grind faves such as “Slow Dance” (where he brought an audience member on stage to groove with him), “Green Light,” and “All of Me.” When it came time for his first big hit, the slow solo “Ordinary People,” the action fell quiet, a velvet curtain came down, and Legend and his piano alone trilled and thrilled The Met Philly’s 3.400 strong crowd.

That was the greatest Christmas gift of all – Legend, alone, emoting with a responsible, but romantic sentiment and a stately sense of soul. 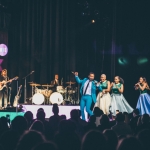