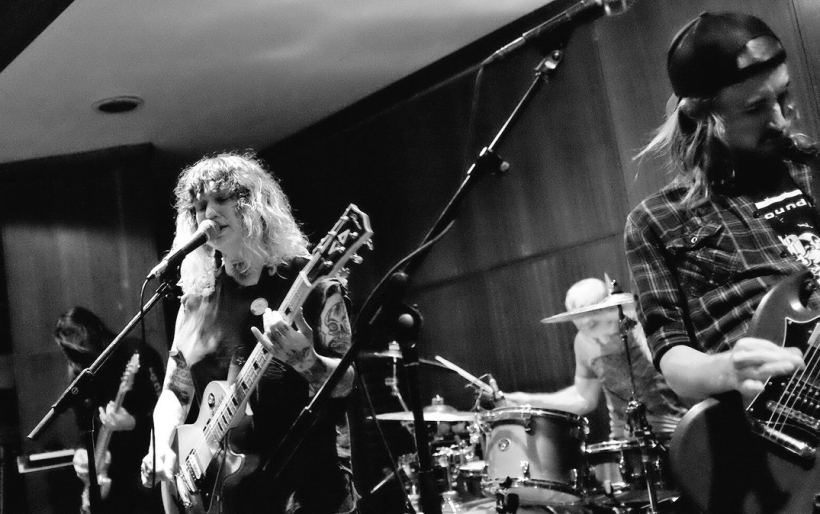 Year-End Mania is the Key’s annual survey of the things below the surface that made 2018 incredible. To kick off the series, Key editor John Vettese recaps six of his favorite Philadelphia music finds from the past 12 months.

This page of the calendar is always a blur for me. Thinking back over the 300-some previous days of listening to records from Philly musicians, getting to their gigs, recording them in the WXPN studio, and spinning their music on the air is a lot to take stock of. Putting together my annual rundown of jaw-dropping artists that were new to me in 2018 quickly went from “hmm, I know I was stoked about these three” to “OMG I already have 20, I need to narrow this down.”

But that’s the blessing of living in Philly, as I say every year. We have amazing musicians operating on all tiers — the broadly-reaching Meek Mills releasing the best and most poignant records of their career, the War on Drugs-es returning home this week for a sold-out run of underplay shows, the Hop Alongs garnering widespread acclaim for their own masterpieces — but we also have musicians who are still sweating it out on basement show bills, touring in battered vans, hustling across the bar scene, and grinding to make it all work for them.

Finding the most exciting musicians in that latter space, and watching them make their way to the former, is easily my favorite part of my job. Here are a handful of artists I hope to see make that journey this year.

It’s tempting to refer to the thrilling four-piece Low Dose as “newcomers” in the punk scene; they only played their first show in August, and all their gigs have been opening slots, totally captivating the fans of whoever that night’s headliner might be. Tempting indeed, but not entirely accurate, since Low Dose’s bloodline pulls together seasoned players in the punk scene: lead vocalist Itarya Rosenberg came from the grunge-tinged outfit Legendary Divorce, while bassist Jon DeHart, guitarist Mike McGinnis, and drummer Dan Smith were the core of revered hardcore crew Fight Amp. Together, their music is a searing and propulsive concoction of feedback and dissonance, hammering beats and headbanging energy, not to mention remarkably catchy hooks. Rosenberg’s lyrics about grief, abandonment, and other emotional lows are transformed into something empowering as she stomps and screams into the mic, riffs away on her guitar, and generally proves to be one of the more gripping frontpeople in the scene right now. I say this, worth noting, having seen Low Dose open for both Soul Glo and Restorations, two incredibly gripping bands in their own right; Low Dose is an adrenaline rush all its own. Promising things are doubtless ahead when their debut album releases early next year; in the meantime, we have the single “For Sure” (stream it below), as well as Low Dose’s first headlining show on December 30th at Kung Fu Necktie.

The word-of-mouth excitement that landed Orion Sun on our radar this spring is no joke. In an industry driven by manufactured “buzz,” and a scene with no shortage of big-up-your-bro FriendRock, the universal reaction I’ve seen listeners have upon hearing singer, producer and multi-instrumentalist Tiffany Majette is refreshingly honest and genuine. The bright melodies, the classic beats, the life-affirming lyrics are hard not to love, and as she discussed in an interview with our Madorne Lemaine, Majette’s creative vision is informed by some well-chosen touchpoints: Stevie Wonder, Lauryn Hill, Frank Ocean. Orion Sun debuted with the late 2017 mixtape (a collection of fleeting moments and daydreams) and spent this year releasing loosie singles like the wondrous dreamscape “Stretch.” Originally a solo-with-laptop pursuit, Majette built it out when they landed on the lineup of Made In America, turning the project into an expansive live band that played live for The Key Studio Sessions. Her Instagram has shown her popping up in fancy locales from Brooklyn to Paris, and a 2019 release is on the horizon.

We were tipped off about up-and-coming singer-songwriter Sophie Coran when Key photographer Rachel Del Sordo was tapped to shoot images for her diner-themed All That Matters EP. What seemed at first like a respectable singer-songwriter outing by a skilled pianist and vocalist takes on a new dimension when I saw Coran live. Her music fuses catchy pop with an admiration for jazz and soul, and those influences come through much in a much more pronounced manner onstage where she is driven by instrumental backing by the awesome experimental duo Trap Rabbit. With them, Coran is free to focus her energy on filling up the space in the best way, both through her vocals — which vary from husky and reserved to bold and expressive — and her instrumental skill. It’s classic, it’s classy, and that’s to say nothing of her taste in covers; when I saw Coran at The Barbarella this fall, she wowed the room with versions of cuts by SZA and Nick Hakim.

I for one am loving the rise of the multifaceted pop star who doesn’t box themselves in. Call it the Anderson .Paak model: a genre-diverse fusion of singing and rapping, of backing tracks and instrumental jams, of rock and pop and soul and all. This is how Boogieman Dela likes to do it — you could label him as a hip-hop artist because of the scene he moves in, but you could put him on a show with electronic artists, with singer-songwriters, and he’d shine whatever the makeup of the bill. Boogieman Dela launched his Broken Watch series of EPs last fall, and put out the second installment in the spring, when I first heard him. In the time since, he’s turned up onstage at the Welcome America Festival, at Jason Kelce’s Make The World Better benefit gig, opening for Oshun at Underground Arts, and a hell of a lot more. Here’s hoping we see more of Boogie in 2019.

A cassette from a trippy, rollicking, and rambunctious Philly four-piece called Lester leapt into my periphery this summer, and I was hooked from the first snare drum hit. They blend the dream-pop of The Sundays and The Cranberries with driven rock and roll of Yo La Tengo, Land of Talk, and Charly Bliss. Led by old friends Juli McCue on guitar and vocals and Tim McMonigle, the band is rounded out by bassist Alex Ruane and guitarist Hannah Kolitz, and their swamp EP is a mix of hazy atmospheres, catchy pop, and an unexpected blast of raw experimental noise-jamming at the conclusion. The pensive single “spoiler” followed last week, and finds the band deep in the ether; with such a robust mix of heady tones and illuminated textures, I’m curious to see where Lester lands next.

Speaking of hazy dreamscapers, I was totally impressed with this spring’s immersive “Unconscious Color” single from Bucolic. The project of Pitman, New Jersey native Seth Carpenter dabbles in the eclectic pop of the Badly Drawn Boy’s and Beck’s of the world, with a focus less on party rocking (he has not yet released a “Dreams” or “Once Around The Block,” though I have no doubt he could) and more on psychedelic introspection. Over the course of four minutes and change, the song meditates and plays out to a wash of brushstroke drums, keyboard beeps, and listening to it is like staring at the globs of paint commingling in the PMA’s impressionism wing. Subsequent releases have touched on tape-warble country (“God of Materials”) and pensive lo-fi rock (the Alex G-esque “Living Under”), all filtered through a naturalistic lens. It’s all been one-off singles from Carpenter so far, but here’s hoping his vision comes together feature-length style in 2019.