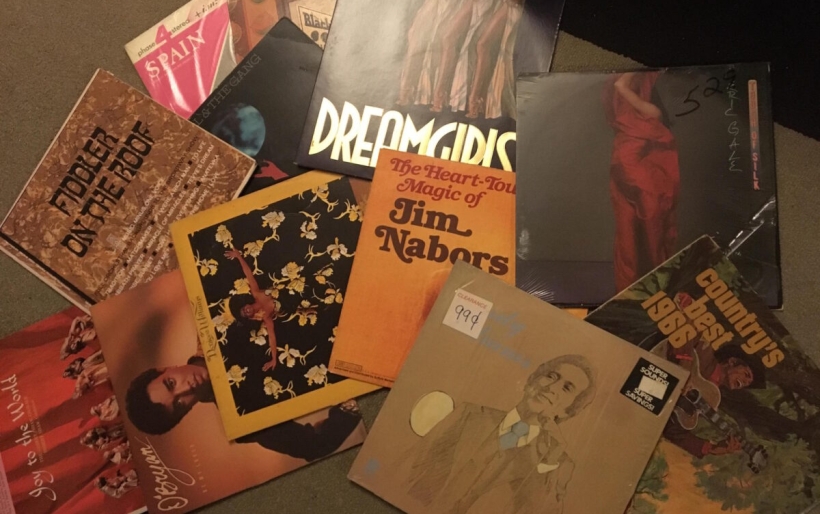 Year-End Mania is the Key’s annual survey of the things below the surface that made 2018 incredible. Today, Key contributing writer Brian Wilensky has a pile of vinyl LPs practically fall into his lap, so he decides to take a listen.

One man’s trash is another man’s dollar bin. And someone left theirs on my apartment building sidewalk steps. Finding trash or strange items left behind from passersby may not sound abnormal for South Philly, but this box of records was a bit peculiar. Here is my story of a few noteworthy albums I found in a box of trash left on my property.

A little over a month ago I was leaving for work early in the morning when I noticed a brown box on the ledge above the steps that lead to my apartment building’s basement from the sidewalk. It wasn’t one of the dozens (or at least what seems to be) of nearly weekly deliveries dropped by Amazon for one of my neighbors in my building. The flaps of the box were folded shut, but it was clearly already opened and repacked. I checked up and down the block. No one was around. It was raining, so I decided to check it quick and bring it inside.

The box contained a couple boxes of assorted pizza scraps, presumably from a shop nearby, several bags of slimy romaine lettuce hearts and almost 20 vinyl records. I still don’t understand how the box arrived or why it was filled with these things, but I decided it was basically trash…minus the records, of course.

The music ranged from a country compilation featuring Johnny Cash, to orchestral movie soundtracks and classical, a couple soul/funk albums and a double LP compilation by crooner Bobby “The Polish Prince” Vinton.

City Life by The Blackbyrds is my favorite in the bunch. “Rock Creek Park,” is an unstoppable funky tune featuring sample-worthy synths and flute. Whoever owned these records first clearly had a soft spot for soul. Deniece Williams’ first album, This is Niecy was in the box, too. Her vocal range grabbed me, and the album as a whole hits the ear the way a big, toothy smile does to the eye.

The cover of Eric Gale’s 1980 album, Touch of Silk, is so very 1980’s it was easy for me to dismiss it at first. However, there’s a foreword from Quincy Jones on the back, so I had to give it a spin. Once I dropped the needle on it, I came to appreciate the album’s clarity for how it was engineered, but also the precise musicianship on both sides of the record. There are groovy, soulful moments and also sparse playing that keeps my attention the whole way and reminded me of the brief period in high school when I got way too into jazz for a sixteen-year-old white kid in suburban northeastern Pennsylvania.

Spain by Stanley Black and His Orchestra caught my attention in this box of records because of how it was kept. Same for the copy of Lionel Bart’s Oliver!, an adaptation of “Oliver Twist” performed by the original theatrical cast members on LP, is still in its original shrink wrap. Both albums have gatefold sleeves. Interesting to think whoever these records originally belonged to never cared to see the artwork or liner notes within. It’s a true sign of a collector and audiophile.

Anyway, the Oliver! album was catchier than I expected it; and made me ask myself, do I like show tunes? No, can’t be, the orchestral soundtrack for Porgy and Bess found within this box didn’t interest me as much. I swear. But this box of trash and records made me wonder why I haven’t been spending as much time digging through the dollar bins as often as I used to. Maybe I will again soon. Hopefully it’ll be just as fruitful.