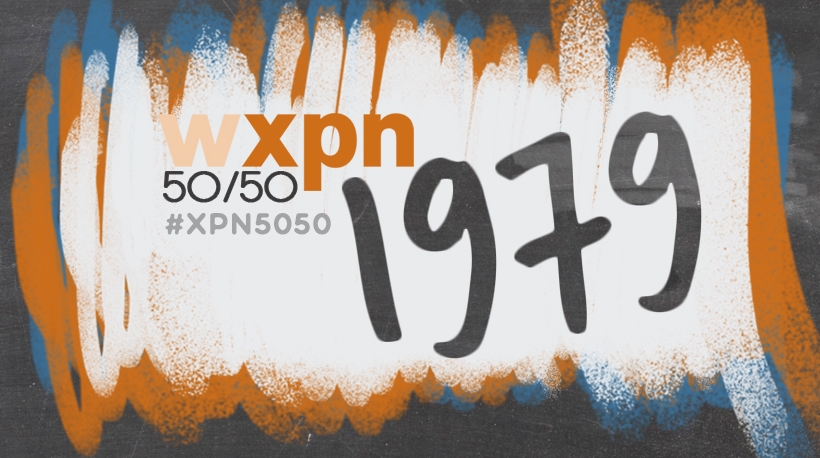 For fifty weeks over the next year, we’re celebrating the music of a specific year every Saturday on WXPN. We’ll be choosing the years randomly, however, for our first #XPN5050, Dan Reed is putting the musical spotlight on the year 1979.

For those of you who remember, the summer of 1979 saw the debut of the Sony Walkman. In it, we slipped cassettes of some now classic records that came out that year: The Clash’s London Calling, Michael Jackson’s Off The Wall, Pink Floyd’s The Wall, Talking Heads Fear of Music, and possibly even the cassingle of “Rapper’s Delight” by The Sugarhill Gang.

1979 was a year when musical styles were emerging, colliding, and shaking up contemporary music is exciting new ways. New York City rockers were finding inspiration from rap and ska, British rockers were finding inspiration from reggae and soul, R&B was in its post-disco come down, and British New Wave was about to take the States by storm. It was a glorious, creative, musical year.

In other forms of pop culture, we were watching TV shows like MASH, Mork & Mindy, The Jeffersons, Taxi, and One Day At A Time. Jed Clampett reinvented himself as Barnaby Jones, Arnold Dingfelder Horshack, “Vinnie” Barbarino, Freddie “Boom Boom” Washington, and Juan Epstein entered their last season of Welcome Back, Kotter, and Dallas had just begun its second season. On the big screen, we were watching Francis Ford Coppola’s tour de force, Apocalypse Now, Breaking Away became a break out hit, Sally Field gave us inspiration in Norma Rae, and it was the year one of the great horror movies of all time, Alien, was released.

But now, back to the music:

Several years ago we featured 1979 as one of the greatest years in music. We invite you to jump into our 1979 Spotify playlist below.