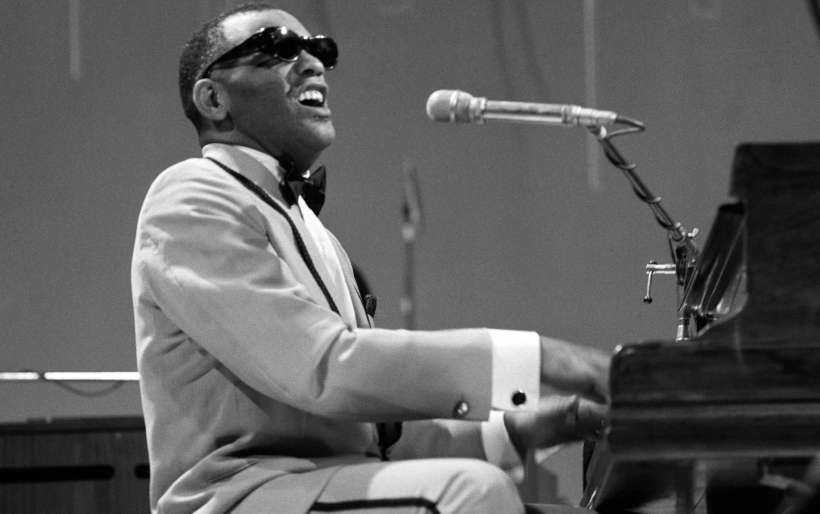 Not only did R&B and soul artists borrow the sanctified sound and fervent emotion of gospel—sometimes they even borrowed the songs.

In his autobiography Brother Ray, Ray Charles gave coauthor David Ritz a frank insight into his musical transformation from an R&B singer into a soul superstar:

“If I was inventing something new, I wasn’t aware of it. I started taking gospel lines and turning them into regular songs. Many of [my] first tunes were adaptations of spirituals I had sung in quartets back in school.” Among the “spirituals-and-blues” he cites creating was “Leave My Woman Alone” from the gospel standard “You Better Leave that Liar Alone.”

The inspiration for Charles’ 1956 “Hallelujah I Love Her So” was “That’s why I Love Him So,” a 1953 Apollo single by the New York-based Gospel All Stars, featuring a twenty-one-year-old James Cleveland as lead vocalist and credited songwriter.

Likewise, 1954’s “It Must Be Jesus” by the Southern Tones became the foundation for Charles’ “I’ve Got A Woman.”

The opening lyric line of Charles’s 1959 “I Believe to my Soul” comes from a couplet found frequently in gospel songs of the day: “One of these days and it won’t be long / You’re gonna look for me and I’ll be gone.”

Brother Ray is one of the best known artists to turn gospel songs into soul standards, but he wasn’t alone. An earlier example of the appropriation of gospel music for commercial purposes is 1941’s “Rock Me,” Sister Rosetta Tharpe and the Lucky Millinder Orchestra’s spiritually-ambiguous take on gospel songwriter Thomas A. Dorsey’s “Hide Me in Thy Bosom.” Not that Dorsey’s lyrics explicitly reference God or Jesus as the object of affection, but it is implicit. On the other hand, Tharpe’s change of lyric from “singing” to “swinging” opened the song’s main conceit, writes Tharpe biographer Gayle Wald, “to various secular interpretations.”

Dorsey himself entered the fray, writing a terse opinion piece in 1941 opposing his gospel songs being denigrated or sung in nightclubs. Truth is, Dorsey, the Father of Gospel Music, was similarly criticized ten years earlier for “jazzing the hymns” with his elision of sacred lyrics and the beat of blues and jazz.

In late 1951, the Royal Sons Quintet began recording gospel for Apollo in New York at the same time that the Bells of Joy were cutting their smash hit, “Let’s Talk about Jesus,” for Peacock in Houston. More than a decade later, the Royal Sons, having crossed over into R&B as the Five Royales, converted the Bells of Joy’s iconic hit into a hip-swinger called “Talk about My Woman.” The Royales retained most of the song’s original lyrics, but switched the gender of the pronoun and replaced “Jesus” with “girl” and “woman.” Even the loping bass vocal solo from the original makes it into the Five Royales’ version.

In September 1963, James Cleveland the Angelic Choir of the First Baptist Church of Nutley, New Jersey, recorded “I Had A Talk with God” for its best-selling album Peace Be Still. The song, written by Cleveland and led by future Voices of East Harlem vocalist Gerri Griffin, left an indelible impression on American popular music. Years later, R&B star Mitty Collier told historian Robert Pruter that one day, while she was under contract to Chess Records, her manager-producer Billy Davis was at the Chess studio in Chicago and came upon session musician Leonard Caston listening to Peace Be Still. Caston was searching the album for songs to teach his church choir, but Davis heard something entirely different. He reckoned that with some adjustments to the lyric, most importantly replacing “God” with “man,” “I Had to Talk with God” could be a soul smash for Collier.

Davis’s intuition was correct. Released in 1964, Collier’s “I Had a Talk with My Man” entered the Cash Box Top 50 R&B singles chart at #38 in October and the Top 100 singles chart at #83. It hit the top ten of the R&B singles chart by November of that year. Pleased with the response, Davis and Collier followed the single with another secularization of a Cleveland composition. “No Cross, No Crown” (from the James Cleveland-Angelic Choir partnership’s next album) became “No Faith, No Love.” In 1967, Collier recorded yet another Cleveland original, “That’ll Be Good Enough for Me,” as a love song (now a pastor, Collier has reverted to the original sacred lyrics when she sings “I Had a Talk”).

Soul, R&B, and pop artists weren’t the only ones in the song re-fabrication business. Several gospel songs began their lives as pop songs. In fact, some of the artists whose songs were repurposed were the appropriators. For example, in 1961, prior to their partnership with James Cleveland, the Angelic Choir of the First Baptist Church released “It’s the Holy Ghost,” a joyous and unabashed refashioning of Ray Charles’ “Hit the Road, Jack,” then rising up the charts. The Angelic Choir did it again in 1968 when they gospelized Marvin Gaye’s April 1963 single, “Pride and Joy,” as “My All and All.”

The Davis Sisters’ 1961 “Earnestly Praying” took its musical cue from Bobby Lewis’s 1961 Beltone dance hit, “Tossin’ and Turnin’.” “I didn’t sleep at all last night,” Davis sings, echoing the pop song’s opening line. Davis’s insomnia, however, is not the result of love sickness but the pressure of a spiritual tussle with Satan. And Mildred Clark and the Melody-Aires of Kansas City turned Sam and Dave’s 1966 soul smash, “Hold On, I’m Comin’” into “Hold On, God’s Coming” for their 1979 Savoy album, God’s Got Everything You Need.

Much of Beasley Smith and Haven Gillespie’s 1949 ballad “That Lucky Old Sun,” and most probably Aretha Franklin’s 1962 rendition of it, found its way into the Caravans’ 1964 chart-topping gospel hit, “Walk around Heaven All Day.” Where Aretha’s lucky old sun rolled around heaven all day, Caravans soloist Cassietta George depicted a soul walking around heaven all day, connecting with long-lost relatives.

Perhaps the most successful pop-to-gospel appropriation was “Jesus is the Best Thing,” recorded in 1975 by James Cleveland and the Charles Fold Singers of Cincinnati, Ohio. In a simple shift of subject, Jim Weatherly’s “You’re the Best Thing That Ever Happened to Me,” immortalized in 1974 by Gladys Knight and the Pips, became a worship classic. The live double LP containing Cleveland and Fold’s song was named the top gospel album of the year, according to Billboard’s 1976 Talent in Action list. It remained on the magazine’s Top Gospel Albums chart four years after its release, turning Cleveland and Fold into two of the era’s biggest-selling gospel artists.

These are just a few examples of how borrowing took place across both sides of the sacred-secular musical divide. Of course, artistic appropriation is nothing new, nor is it exclusive to gospel, R&B, soul, rock, or any other form of music, for that matter. It happens in all forms of artistic creation, including film and theater. It reminds us that there’s nothing new under that lucky old sun.

About the author: Robert Marovich is the founder and editor-in-chief of the Journal of Gospel Music website, and author of A City Called Heaven: Chicago and the Birth of Gospel Music