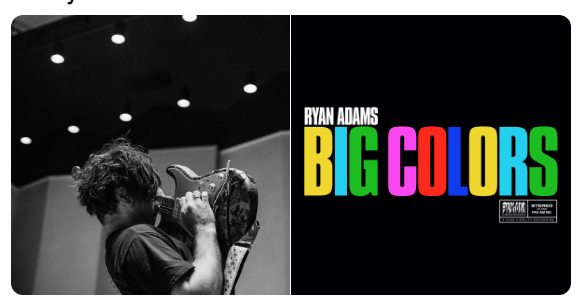 It all started, as these things often do, with a Tweet. 24 hours ago, L.A. singer-songwriter rock and roller Ryan Adams simply posted “Hi @wxpnfm  Anything interesting happening today?”

With it, an image of him shoving his face into his guitar strings, and what appears to be album art for Big Colors, one of reportedly three albums he’ll release this year.

Our mentions immediately started blowing up with guesses from fans around the region and around the world — was he returning to Free at Noon? Is he planning a secret Philly show? I love you, come to Albuquerque! And so forth.

The “interesting happening” was a new song, “Doylestown Girl,” getting its radio debut just before 5 p.m. (and then, due to massive popular demand, not long after), with WXPN’s Dan Reed. Since Adams named it after the charming suburb just north of Philly, he wanted to give his biggest radio supporters first crack at spinning it. Anticipation was high.

And when the song hit the air — a midtempo heartbreaker, strummed gracefully the way only Adams can — the accolades began pouring in.

All in on the new @TheRyanAdams. "Doylestown Girl" is incredible @wxpnfm@WXPNDanReedhttps://t.co/VsqOWm0xeH

Because we couldn’t exactly flip to an all-“Doylestown Girl,” all-the-time format, the next host to get a turn at spinning it was the XPN Morning Show’s Kristen Kurtis at 8:20 a.m.

Yes! I ran home from dropping kid off at school just in time to hear the new @TheRyanAdams song. It’s wonderful! Thank you @wxpnfm#DoylestownGirl#BIGCOLORS

Kristen even had a listener / DRA megafan tuned in from Barcelona (where it was 2:40 in the afternoon) who selfied to prove it.

Speaking of international listeners, this person from Guatemala even grabbed an aircheck of Dan Reed playing “Doylestown Girl” and posted to Soundcloud. Listen below.

Big Colors was recorded with Don Was, and releases on April 19. No further details on when we’ll hear more from it, but in the meantime, we’re going to agree with Twitter user Larry: thank you, Ryan Adams, for the wild ride.