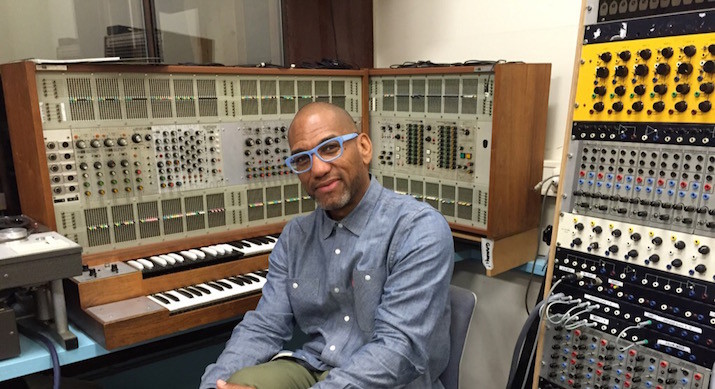 Whether on the dancefloor or in the studio, King has the aptitude to shift vibes, and in that, conjure a certain spirit.

Philadelphia-based music producer and DJ, King Britt is not a gospel musician, but that doesn’t mean his music isn’t religious.

In 2005 during a rare lull, King landed on a project that would ultimately be one his most important works: King Britt presents Sister Gertrude Morgan. The twelve song album is a remix of a one-track tape recorded at Preservation Hall in New Orleans. The album features Sister Gertrude Morgan, a street preacher turned artist, who believed she was the bride of Christ.

Rachel Ishikawa: Tell me a little bit about Sister Gertrude Morgan and what you know about her and her upbringing.

King Britt: Sister Gertrude Morgan was a painter and later became an Evangelist who thought she was the bride of Christ. She would be on the street corners in New Orleans with a tambourine, which was her only instrument, and singing these songs about Christ. Preservation Hall at the time was the number one place to see traditional New Orleans Jazz. So in 1968/69, they recorded the Sister Gertrude Morgan album, which is just her and tambourine in Preservation Hall, one microphone right to tape.

Fast forward to 2005 and Andy [Hurwitz] from Rope-a-Dope happened to be in New Orleans visiting Preservation Hall. They were playing the recording of Sister Gertrude Morgan. He’s like, “King you gotta hear this record.” And it was at a time where I was figuring out what my next move was musically. First he sent me the book of artwork. But music, that was a whole other thing for her, you know.

RI: Could you describe or characterize her art?

KB: Sister Gertrude’s visual art – it’s very raw. Beautiful colors. And it’s definitely storytelling. It reminds me of you know a child storybook. She didn’t have certain rules that she followed. She had her own kind of parameters of what she fit into. I don’t think she was worried about it. Or anything like that. She just did her art the way she wanted to so it looks very unapologetic and very intentional as well.

RI: Yeah, moving on to the trajectory of how you got involved. So you’re approached about making this record…

KB: So I got approached by Andy Hurwitz from Rope-A-Dope at the time. And he’s like, “I can hear you mixing this whole thing.” So first I looked at the artwork he sent me the huge book beautiful book and then I listened to the album while reading the book. And it just all teleported me in back into a time and I felt like I was there with her in Preservation Hall. I instantly hit Andy. I’m like, “I’m in, but I need to call Tim Motzer,” virtuoso guitarist, Philly legend. We definitely need the organicness of his guitar playing and the sounds of his guitars to come together and cross-pollinate in to make this work of art. Because you could do a remix album and it’s all like dance and it would be corny. So we treated her as if she was in a studio with us and it was an extremely spiritual experience being in the studio. We really felt that she was with us.

RI: When you first listened to Sister Gertrude Morgan, what was your first impression of her music?

KB: It was exactly like the artwork: raw, unapologetic, focused, colorful. And just her voice, the tone of her voice is so powerful to me. It demands attention just like her artwork.

RI: What was her use of percussion like, since the only instrument she played was tambourine?

KB: Well first the the sound of a tambourine demands your attention. And there’s no escaping it. It’s because of the tone and how she’s playing it – you can tell she’s not the greatest player – but it works with her because she’s playing and singing together there’s a rhythm that happens between her voice and the actual hitting of the tambourine. It’s just a natural rhythm that she has that worked and it was syncopated with her vocal.

Now when we received the two inch reel to do the remix, we couldn’t separate the tambourine and her vocals. It was altogether, bleeding. Once you let go of that kind of the producers ego, you have to go with the flow. Well, I love limitations now as an older producer. I like limitations because it pushes you in directions that you normally wouldn’t go. When I programed the rhythms and beats around [the track], it was incredible because it pushed me in places that I just wouldn’t have gone rhythmically, as far as the electronic beats underneath without the tambourine.

RI: I’m curious if there was any particular logic going into the sounds like you all were choosing to include.

KB: Absolutely. Our respect for New Orleans is so deep. So we had to bring some traditional elements to the compositions. That’s why Tim Motzer’s guitar tones were so important in this process because we definitely wanted the Southern, New Orleans, funky, dirty, raw guitar tones reminiscent of that era.

On “Power” we brought in G. Love, who is good friend of mine. The reason I brought in G. is because his love for New Orleans, blues, funk, soul and gospel. He flipped out two takes to do his harmonica piece. I think he even had a little drink. It was a total vibe in the studio. He killed it and he left and it was fantastic just that.

So yes, those sounds were very important in what we chose for the project. But then the drum sounds that I use were very today. So there’s a nice balance of yesterday and today, which leads to tomorrow.

RI: How was the actual studio experience spiritual?

KB: The whole process of making the sister Gertrude album was at a time when I was trying to decide what my next move was musically. I never really get stuck, but at this moment – end of 2005 – I was stuck. I need a project to learn from as well as contribute what I’ve learned up until now into that sound. So I was talking to my mom like, “Mom, I’m really like stuck,” and she’s like “You need to look towards God,” because she’s very religious. And then God came to me. It was like He or She was like, “Here you are,” through Sister G. So that was the first part of the spiritual experience of sister Gertrude behind-the-scenes composition.

The second thing was just the vibe in the studio. We felt so open to do whatever and there was no like label overlooking every move. As soon as you put on her vocal, you’re just in it. We would throw her vocal on and we would start jamming to the vocal as if were a band.

There’s a song, “God’s Word,” and so we did the track – it’s like three in the morning. This song “God’s Word” – powerful. But it was missing something. Tim had his amp all the way and when you put certain amps up that loud it gets radio frequencies. All of a sudden from the radio frequency, there’s this keyboard solo right in the spot where we needed it and it stopped right where we needed it. And we looked at each other like, “That was Sister. She sent that.” We knew right there that we were doing some divine work.

The Sister G project went on to be in True Blood. It was in Miami Vice. It was in what David Dallas who’s a producer out of New Zealand sampled it and it became this massive hip-hop song. Sister G’s all over the place. You may not know it’s her if you don’t know the album, but she’s there.

RI: I think one of the most interesting conversations I’ve been having with people is the blurry divide between sacred and secular music. And I feel like this is like a perfect example of how like those lines are so blurry. So what does that mean to have music that is deeply religious and rooted in the Bible reinterpreted and then yet put in two different contexts?

KB: I mean the Bible itself has been reinterpreted and put in different contexts. So I think all things eventually get re-contextualized. There’s a sort of right there is a respect that we have for the music where it’s from. You know, we’re not just remixing for the sake of remixing. We’re mixing to bring it to a broader or different audience in keeping the message that Sister intended keeping and just enhancing that to fit into a different ear. Sometimes in these situations the message gets lost and we wanted to make sure that we didn’t do that.

As far as people in general mixing secular and non-secular, I mean all music to me is divine. Even even the kind of what people call Devil’s music there’s of some sort of divine intervention because when you’re creating music – that’s a divine act. You’re creating something out of thin air with nothing. And that’s magical. Even when you’re in a club. A lot of people look at DJing as shamanistic. As DJs conjuring certain vibes and sounds and then to see everyone moving to the sounds. It’s a religious experience.

RI: Would you would you consider the Sister G remix album a gospel record?

KB: Yeah, absolutely. We didn’t think about it as a gospel record at first. Like all the elements are there. So we have a band and we’ve played it live. We did The Leaf Festival and people were coming up like, “That was a religious experience.” it’s a major gospel record. But it just wasn’t marketed as that. It was marketed just as s Soul record, you know, which it is as well.

RI: You were mentioning that your mother is pretty religious. Did gospel play a role in your life growing up?

KB: My mother was part of the Church of Christ, which I’m not. I’m more on a Buddhist side of things now, but as a kid, I was forced to go to Church of Christ. Church of Christ isn’t really a musical spot. We have these hymn books and we sing and that was the extent of it. Now my friends were part of gospel churches and when I went to a gospel church, it was like going to a party. I mean these musician are in all these bands like Beyonce’s, Jill Scott, Lady Gaga and they’re all from the church. They’re all from the gospel background and that was a huge. That’s a huge contribution to the Philadelphia sound. Gospel really saved a lot of kids, you know, because that was an avenue to escape the craziness in different neighborhoods. So it’s like you’re going to church or I’m going to join the band because I feel this camaraderie with other musicians in the band and it’s safe space.