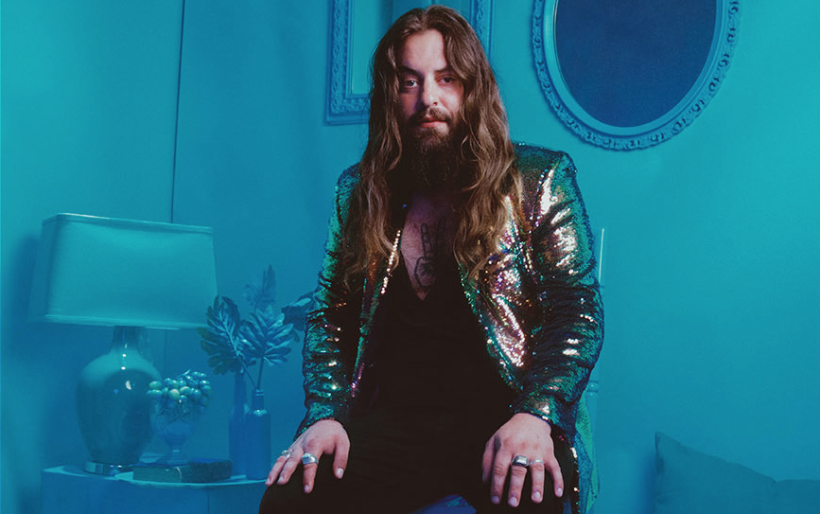 Strand of Oaks | photo by Alysse Gafkajen | courtesy of the artist

There’s an air of finality in the opening notes of Strand of Oaks‘ new single “Weird Ways,” as frontman Tim Showalter very plainly and directly sings “I don’t feel it anymore.”

Set to warm, close-mic’d acoustic guitar, with his robust baritone upfront in the mix, this is the intimate and vulnerable Showalter we hear once a year at the Boot & Saddle Winter Classic; it’s the Showalter of back-catalog songs like “Kill Dragon” and “Sister Evangeline.” And it’s a Showalter who, as he was writing, clearly felt out of place with the direction his music traveled versus the direction the music world was heading.

“The scene isn’t my scene anymore.”

This is the way that Strand of Oaks’ just-announced sixth album Eraserland begins, and a glance over song titles like “Final Fires” — or knowing the song “Keys” from his live set, where he sings “we should just run away” to his wife Sue — seem to paint a picture of somebody ready to move on.

But then a snare drum downbeat kicks in. And the realization hits — we’re not going anywhere just yet.

Showalter recorded Eraserland last year in Louisville, Kentucky. His backing band for the studio sessions was guitarist Carl Broemel, keyboardist Bo Koster, bassist Tom Blankenship, and drummer Patrick Hallahan. Some readers might recognize those names and realize that Showalter recorded his new album with My Morning Jacket sans Jim James, and as much as they bring their precision playing and expert musicianship to Showalter’s songs, based on what we hear in “Weird Ways,” he is fully enveloping them in the Strand of Oaks world. And honestly, a Showalter realizes a bit further down the lyrical road, it’s not a bad world.

“A few good riffs and a sticky bag of green / you said before, it’s not as bad as it seems / a grown up kid gets to live out all his dreams.”

The song builds over six minutes into a resplendent anthem, and as the coda plays out, Showalter seems to have addressed his concern at the opening — he is, once again, feeling it — but he’s also wanting more, yearning to see what else is out there in the world, wanting to transform. And as vocalist Lacey Guthrie of Twin Limb provides an amazing counterpoint harmony, the resolution of the song is repeated at its close: “There are colors in the places you can’t find, it’s a weird way of saying goodbye.”

As Showalter writes on Twitter, “We feel like we are disappearing, there is that glimmer of light. You may not come out the same person you started as, but that’s okay. I’m glad this record is here now for whoever chooses to find it.“

This record wasn't supposed to be here.

I had thought for a moment Strand of Oaks might be over until a text from my friend, Carl Broemel, changed all that. Unbeknownst to me, four members of My Morning Jacket and Kevin Ratterman booked studio time to record songs I didn't 1/4 pic.twitter.com/7R9F43L83H

we feel like we are disappearing, there is that glimmer of light. You may not come out the same person you started as, but that's okay. I'm glad this record is here now for whoever chooses to find it.

Welcome to Eraserland, where we all can start again. ~tim
3/4

Watch a beautiful, in-the-studio video for “Weird Ways” below. Eraserland is out via Dead Oceans on March 22nd, and can be pre-ordered here. The band’s U.S. tour kicks off on April 10th at the FM Kirby Center in Wilkes-Barre and concludes on May 10th at Union Transfer in Philadelphia. Tickets and more information can be found at the XPN Concert Calendar.