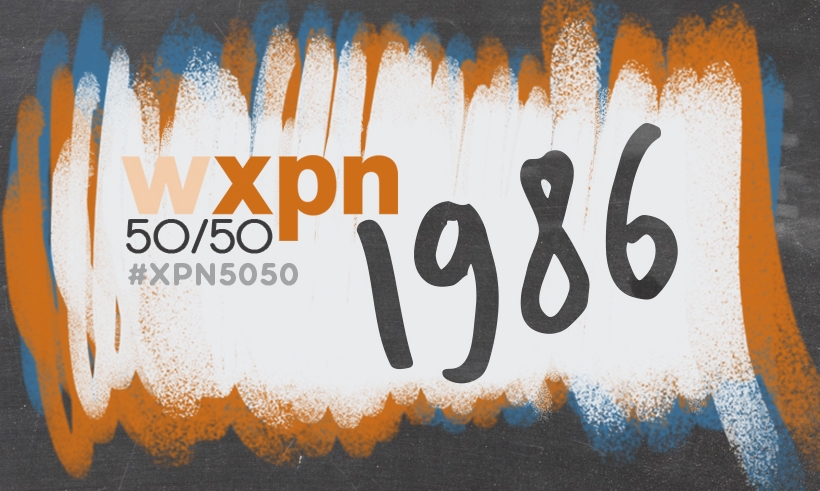 For fifty weeks over the next year, we’re celebrating the music of a specific year every Saturday on WXPN. We’ll be choosing the years randomly; for this week’s #XPN5050, Bruce Warren is putting the musical spotlight on the year 1986.

For a turbulent year of alarming news stories — from the Challenger to Chernobyl to Mad Cow Disease and the Iran-Contra Affair — the music of 1986 was equally turbulent, and not easily contained in a box.

You had Paul Simon collaborate with Ladysmith Black Mambazo and the Boyoyo Boys to record Graceland, the album that defined the second era of the veteran singer-songwriter’s career, and an eternal best-rock/pop-album-of-all-time contender.

You saw New Order release its fourth LP, Brotherhood, topping charts in its native United Kingdom and getting a warm reception stateside as well, solidifying the Manchester band’s transition from post-punk to electronic dance, particularly on the hit single “Bizarre Love Triangle.”

Run D.M.C. and Beastie Boys brought hip-hop to the mainstream with Raising Hell and Licensed to Ill, respectively, while Janet Jackson re-invented herself as a pop goddess on Control and They Might Be Giants debuted with their self-titled collection cerebral indie rock.

Other albums with hits galore on the mainstream and college rock scenes were Prince’s Parade, Madonna’s True Blue, and R.E.M.’s Life’s Rich Pageant.

In the world of television, the Oprah Winfrey Show made its national debut; her first-ever guest was author Margaret Kent, who had recently published a book on relationship and marriage advice. Over the ensuing 25 years, Oprah would go on to interview celebrities, entertainers, and world leaders; head campaigns aimed at social change; and become the highest-rated daytime talk show of all time.

Other notable programs on the tube were Alf, Full House, and the weirdly irreverent kids’ show Pee Wee’s Playhouse, an offshoot of a standup character created by comedian Paul Reubens and popularized in the Tim Burton filmPee Wee’s Big Adventure.

Speaking of films, there were some stone cold classics released in 1986, from the David Bowie-starring world-bending fantasy Labyrinth to John Hughes post-brat pack adventure Ferris Bueller’s Day Off — which resurfaced for the next two decades in yearbook quotes by suburban teens (including, we’re embarrassed to say, this author) — to Rob Reiner’s funny and heartwarming coming-of-age story Stand By Me, an adaptation of a Stephen King novella.

For a playlist of music from the year 1986, listen below.