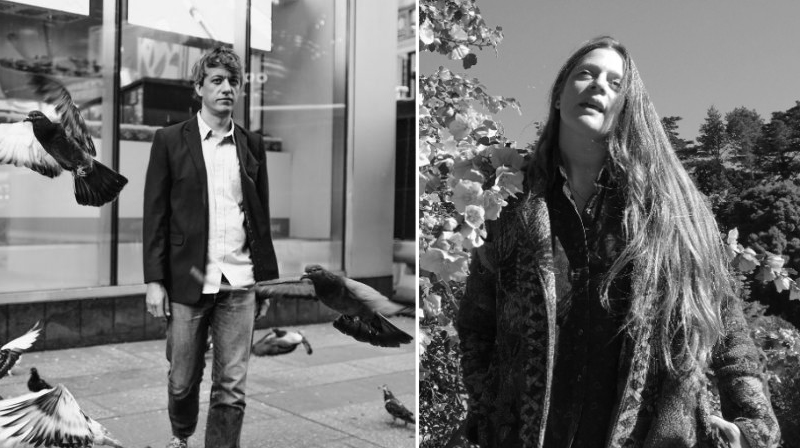 Steve Gunn may live in New York. Meg Baird may live in San Francisco. Mary Lattimore may live in Marin County.  No one, however considers the guitarist, vocalist and harpist — respectively — as anything but dyed-in-the-wool forever Philadelphians. Therefore, their shared bill Union Transfer showcase on Saturday February 2 isn’t a homecoming. It’s a block party. Gunn and Baird phoned in from their respective homes to discuss their new albums (Gunn’s The Unseen In between, Baird and Lattimore’s Ghost Forests) and their friendly harp slinging pal.

The Key:  What did each of you know about the other and their music before you ever worked together or decided to tour as one?

Meg Baird: Before I met Steve, I knew about his music from this Philly compilation, Eric Hex’s thing?

Steve Gunn: Oh yeah, wow. That was one of the first things that I did on my own.

MB: It came out right when I got to Philly. The compilation was cool. But Steve’s work stood out. I really liked that track. It just sounded cool. I liked his guitar style – it was pretty and out at the same time. That’s what drew me in.

SG: I think it was hearing Espers for the first time that I got acquainted with Meg. We even played this show together at the Philadelphia Record Exchange. We got a chance to hang out and talk after wards.

MB: The gig with the tiki lamps.

SG: Actually it was just you Greg Weeks and Brooke (Steinson). I remembered Clock Strikes 13. We chit-chatted at the record store, as it was more of a chill. I knew Jack Rose and some of the other people there.

TK:  Steve, you’ve worked with both Meg and Mary on your records. What about the songs they appear on required their unique talents? How did you figure, “I need Mary’s harp or Meg’s voice?”

SG:  I was in upstate NY recording a while back, I didn’t know what I was doing, but I called Mary to play, knew that I wanted to invite new musicians that I admired, and wanted them all in the same room for a few days just to see what happened. Mary is not only an amazing harpist, but she can play piano and feel out songs as well as the vibe of the room. She’s so humble and supportive. Since that time, as we’ve run in the same circles, it has happened several times. The harp adds a fascinating texture, and I’m always looking for ways to include her. With Meg, I have been a fan for so long, I hoped we could find a time and a place to record together. Finally everything aligned itself for the new album.

TK: So it was timing, rather than the nuance of the music itself.

SG:  Yes.  But I do think, in some ways when I was writing the songs, that I heard our voices together. Probably because before that, she and I toured with Lee Ranaldo in his band. All three of us singing and playing together? I think I may have wanted to recreate that in the studio.

TK: Meg, what unique thing did you bring to Steve’s party?

MB: I am truly a big fan of his singing and will talk anybody’s ear off who’ll listen regarding that fact. I was a little anxious as to how our voices would blend, the textures and space, but I focused on Steve’s phrasing and supported that, hovered over that.

TK: How was touring with Lee?

MB: It was the best. Some of my favorite touring. Really.  He is amazing to watch and hear, and be around. Plus,  he has great stories.

SG: I was a little nervous because Lee is one of my guitar heroes. I think he was just so generous and cool and open form the minute we jumped in the car together. He just exudes positivity.  It’s inspiring to be around him because he is constantly thinking, doing and engaged.

TK: So how do you both know and initially fell in love with Mary?

MB: I first heard her and met her through her Rochester connections in Espers, Otto and Greg. She was visiting Philly. I just thought it was awesome what she was doing with the harp and taking it into a rock context. I knew that it was tough, and that he music always managed to sound really beautiful.

SG: I think I met Mary first in Philly after she moved there. She was friends with Jeff Ziegler. She very quietly knows tons of people, so we had more mutual friends than I realized.  I did soon after ask her to play with me. She was such an amazing accomplished player already, and she isn’t fazed by the opportunities that come her way. Plus, she’s a really hard worker. It’s not easy driving around with a huge heavy instrument in your car.

Steve Gunn performs with Meg Baird and Mary Lattimore at Union Transfer on Saturday, February 2nd. Tickets and more information can be found at the XPN Concert Calendar.