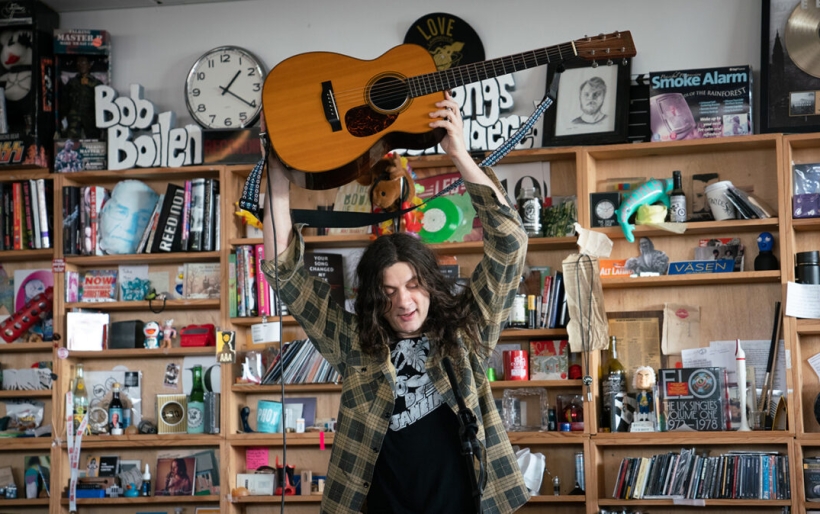 Kurt Vile‘s familiar chilled-out tunes sound great in any setting, but his laid back vibe makes him an outlier at NPR’s Tiny Desk, where most artists experience some degree of nervousness. Vile recently visited NPR headquarters to record his first solo Tiny Desk Concert; he previously appeared behind the desk with Courtney Barnett while promoting their 2017 Lotta Sea Lice collaboration.

To suit the intimate venue, Vile played acoustic without his band The Violators, appearing just with guitarist Rob Laakso. The duo played two songs off Vile’s recent album Bottle It In, starting off with the six-minute “Bassackwards” before moving effortlessly into “Loading Zones,” and closed with “Peeping Tomboy,” an older Vile-penned tune from Smoke Ring For My Halo that was re-recorded for Lotta Sea Lice.

“On the surface, it all can seem just chill. But there’s a lot of rumination in these songs — and even when he’s gazing into the overhead office lights, I think he got his mind on the stars and the world at large.”

Watch Kurt Vile’s Tiny Desk Concert below. Vile’s next regional appearance is a show at Club XL in Harrisburg on February 11; find more information on the XPN Concert Calendar.