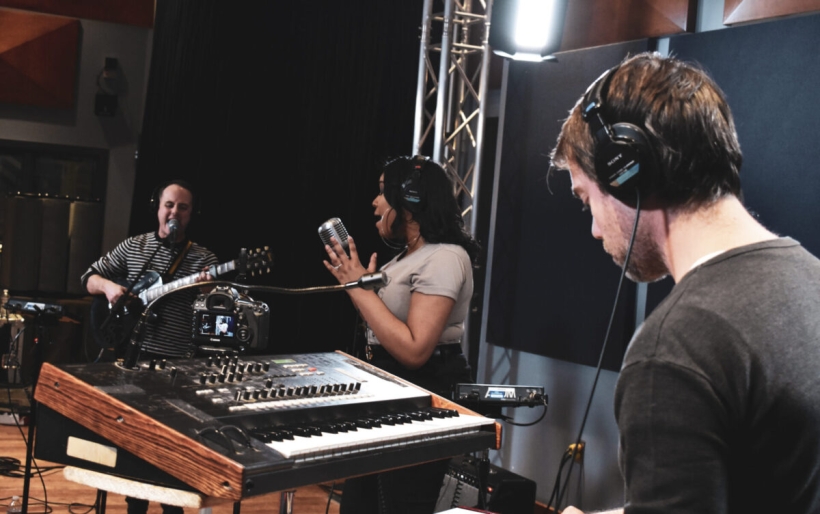 “All right, are y’all ready to rock?” I asked the members of Grandchildren as we finished setup and soundcheck in WXPN studios last month…and drummer Roman Salcic had the perfect response: “We are ready to art-pop!”

Truly I love the idea of “art-pop” as a verb. It’s an active phrase, definitely more active than the word “rock” — which, if it wasn’t the name of a legacy music genre named after a colloquialism for sex, would be a simple and unimpressive noun, a word for a heavy and blunt geological material. By comparison, the activity implied by “art-pop” feels vivid and full of imagination. Which is a perfect description of the consistent trait that has defined this adventurous Philadelphia band for the past decade.

Since bursting from the scene surrounding Baltimore Avenue’s storied Danger Danger House with the 2009 EP Cold Warrior, Grandchildren has grown and evolved in terms of sound, style and personnel. They’ve done glossy, impressionistic synthesizer symphonies and folk-style tunes married to towering percussion; they’ve incorporated elements of jazz, psychedelia, and progressive rock. While we were setting up for the band’s return to WXPN studios, production assistant Rachel Del Sordo noted how streamlined the band’s current configuration was: last time they recorded, we used all 24 XLR cables coiled up in the performance studio closet, and had to go dig up more cables elsewhere. Were we missing something?

Turns out we were not — the band was. That 2015 session included not only Grandchildren’s core instrumentation of guitar, drums, and keyboards, but two full drumkits, and a horn section lined up against the back studio wall. The Grandchildren of 2019 stripped away some elements (we’re down to a single kit, no brass) and added a big one: commanding vocalist Shari Amanda, who joined Grandchildren’s lineup last year and plays a key part in the band’s brand new self-titled record. She doubles the vocals of singer-guitarist Aleks Martray, adding harmonies on some passages, and an emphatic upper octave on others. It makes the lyrics hit harder — lyrics about growth, change, and maintaining connections. And on “Phantom Pains,” Shari takes center stage with a galvanizing performance you can watch video of below.

This leaner, meaner Grandchildren tore through a tremendous four-song set showing off highlights of their self-titled album, which is out now via Ernest Jennings Recording Company and available for download or vinyl-ordering right here. “Zuni” opens the proceedings with a light, highlife-inspired rhythms and licks that bounce and bump into big soaring choruses — which, with Aleks and Shari’s voices in tandem, boy do they soar. “OK I’m Waiting” is an existential quandary about the passing of time, and bassist Russell Brodie rides an ear-catching counterpoint to John Vogel’s atmospheric synthesizers. On “Gravity,” another big and memorable chorus comes into the fray — for all their avant-garde tendancies, Grandchildren loves to craft a good pop earworm — talking about liberating ourselves from the weight of the world and its archetypes: “And I don’t believe the wicked, and I don’t believe the pure / and I don’t believe there’s anything you’ve never seen before.”

Listen to Grandchildren’s full Key Studio Session below, and see the band bring it to the stage on its spring tour, anchored by a March 1 hometown gig at Johnny Brenda’s. Details on that show can be found at the XPN Concert Calendar, full tour dates can be found below.