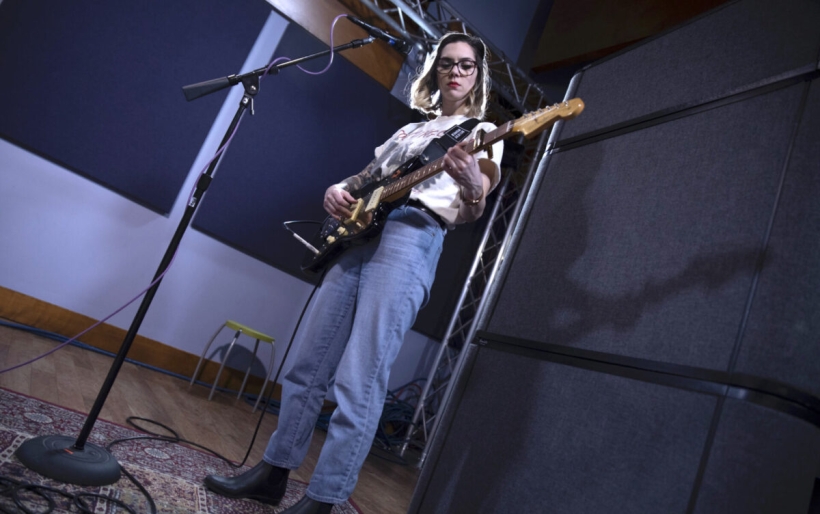 We were fortunate enough this week to catch Kayleigh Goldsworthy in a rare moment of respite.

Whether residing or just passing through, the singer-songwriter and guitarist has been all around these United States — many of the places that pop up in her songs, like Portland and Nashville and New York — and for the past year and change, she’s called Philadelphia home. The concept of “home” in some ways is a bit nebulous, though, since Goldsworthy is always on the go.

When she stopped by WXPN to record a studio session for The Key and Folkadelphia, she had been off tour for only 24 hours. From the fall, up until last week, she was on the road with New York City emo outfit Bayside, both as an opening act as well as a member of the band, playing keys and auxiliary instrumentation. She does the same for Philly native Dave Hause in his band The Mermaid, and she’s about to head out on another run with them, including two sold-out Boot & Saddle shows. Goldsworthy first connected with Hause on the Revival Tour circuit led by Hot Water Music’s Chuck Ragan, not long after the release of her Tegan and Sara-esque debut LP Burrower, and has been part of his band for the past several tours.

To make her 2019 itinerary even busier, last weekend she played a one-off reunion gig for her first band, Syracuse’s The Scarlet Ending, and was both stoked and confunded to revisit their material for the first time in five years. “WHY did we make these songs so difficult?” she laughs about practicing for the gig as we were setting up in the studio. And then there’s the matter of her own music that she was stopping by to perform: her excellent autumn 2018 EP release, All These Miles, and her first Philadelphia headlining show in support of it, this Saturday, February 16th at World Cafe Live.

In a way, constantly learning and playing music keeps Goldsworthy grounded, whether it’s rehearsing a 20-song setlist for Bayside, diving even deeper into Hause’s catalog, or perfecting her own songs. And that she does; as a listener, you can tell that a lot of thought and care went into crafting a lift and rise to the melodies for maximum emotional effect, or a circular nature to the lyrics that brings the listener along on a journey.

The song “Jamie” is a perfect example of this, a beautiful piece of music that aligns fear of death with interpersonal connection, using airplane flight as a central image to hammer it home. It’s a very Nashvillian song, with powerful melodies and strong bones, and a versatile one at that — Goldsworthy totally owns it in its fingerpicked solo-electric emo ballad state, but it could also easily be taken down a rootsy singer-songwriterly direction by, say, a Margo Price…or perhaps a big pop direction by Taylor Swift. (Maybe?)

Half of Goldsworthy’s set consisted of these contemplative songs, and we’ll hear more of them on Folkadelphia later this month. But her other half leans hard into her punk rock roots, beginning with “Stuck.”

The song is a chugging power chord anthem about being kept in emotional limbo, and rocks with a yearning urgency not far off from Laura Stevenson or Against Me!’s Laura Jane Grace. It also pairs neatly with the more downbeat “West Coast,” and the set-closing tip of the hat to the highs and lows of being a nomadic musician, “Cursed to Wander.”

A curse, perhaps, but also a blessing. Goldsworthy has connected with a lot of people along the way, and found a community of friends during her time in Philly, including Augusta Koch of Gladie and Cayetana, Anika Pyke of Katie Ellen and Chumped, and Roger Harvey, who brings everybody together in his semi-regular “family” shows. It was at these gigs that I was first introduced to Goldsworthy, in the basement of the First Unitarian Church last March, and again in its more intimate Side Chapel in December.

The latter show was the first time I heard the song “Jamie,” and it floored me. It’s such a powerful piece of songwriting perfection that seems at once very specific and personal (“you wanna teach photography / age with grace and dignity”) while transcending to a level where whatever your personal fear to be overcome might be, you work through it in its words.

Goldsworthy, for her part, seemed equally floored by her first year in Philly; she told the crowd that of all the places she’s lived, nowhere else has felt this much like home. And as much as she professes gratitude for that, we’re grateful to have her as a neighbor.

Kayleigh Goldsworthy headlines World Cafe Live upstairs on Saturday, February 16th; tickets and more information on the show can be found at the XPN Concert Calendar. Listen to her Key Studio Session below.