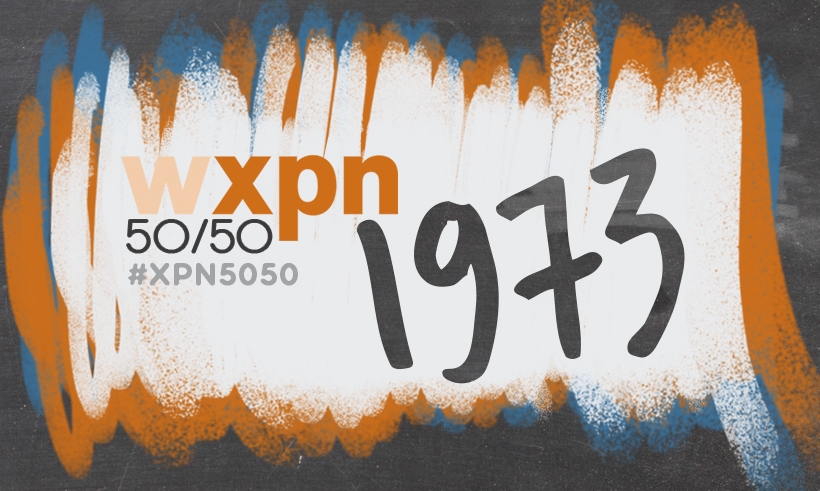 For fifty weeks over the next year, we’re celebrating the music of a specific year every Saturday on WXPN. We’ll be choosing the years randomly; for this week’s #XPN5050, Bruce Warren is putting the musical spotlight on the year 1973.

Seriously. Look at how many incredible albums came out in 1973. We’re talking about some of the most classic of the classic rock albums of all time like Pink Floyd’s The Dark Side of the Moon, Houses of the Holy by Led Zeppelin, Quadrophenia by The Who, Elton John’s Goodbye Yellow Brick Road, Band On The Run by Paul McCartney and Wings, Lynyrd Skynyrd’s debut, Bruce Springsteen’s first and second albums, Steely Dan’s Countdown to Ecstasy and incredible albums by The Eagles, The Allman Brothers, Yes, Alice Cooper, Roxy Music, The Rolling Stones, Little Feat, and ZZ Top.

In 1973, R&B was on fire. Stevie Wonder released the ground breaking Innervisions, Marvin Gaye dropped Let’s Get it On, and Oakland’s Tower of Power gave us their seminal self-titled album. In other sounds, Herbie Hancock released the jazz funk classic Head Hunters, The Wailers released Catch A Fire, Tom Waits released his debut, Closing Time, and Frank Zappa and The Mothers of Invention blessed us with Over-Nite Sensation. Jazz fusion was in full effect: Mahavishnu Orchestra released Birds of Fire, and Mahavishnu drummer Billy Cobham debuted Stratus, a record that would serve as the musical blueprint for trip-hop when Massive Attack sampled it in 1991 on their song, “Safe From Harm.”

In television, 1973 gave us the debut of the lollipop licking police detective Kojak with Telly Savalas. Tennis players Billie Jean King and Bobby Riggs faced off in The Battle of the Sexes. A Charlie Brown Thanksgiving aired on CBS for the first time. In May of 1973, the Watergate scandal hearings were televised.

In movies, some timeless classics ruled the box office in 1973. Capturing our imaginations that year were The Sting, The Exorcist, American Graffiti, The Way Were Were, Live and Let Die, Paper Moon, and Serpico.