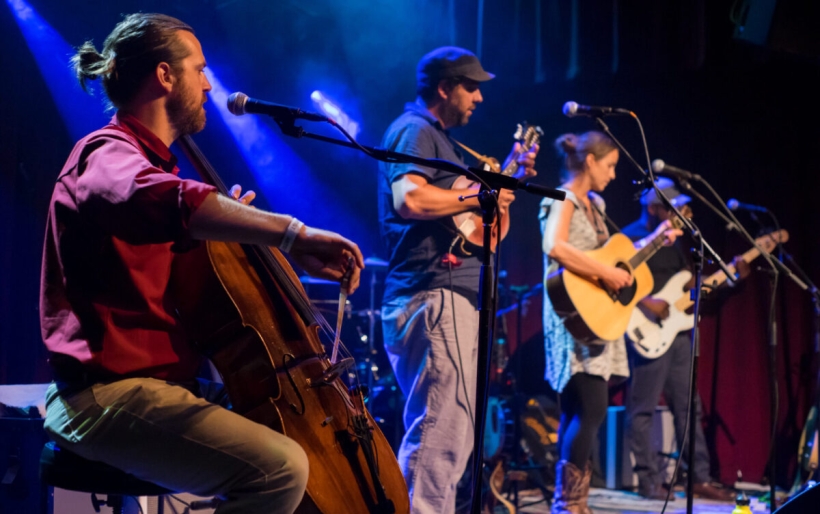 Under the Oak | photo byEllen Miller | courtesy of the artist

Philadelphia folk band Under the Oak recently released a music video of their song, “Beyond the Physical,” off their latest album, Big Sky. While the album was released last spring on the Winding Way Records label, the stunning video is brand new and provides listeners with a meditation on what lies our mortal world. In the song’s premiere with Bluegrass Situation, singer-mandolinist Adam Monaco said that “Beyond the Physical” was a “‘gift song’ that came fast and furious.” The lyrics came to him on a beach in Pensacola when his father was sick, but before Monaco knew that his father would soon be brought to hospice care. This song wrestles with grief in a way that feels humble and authentic. Under the Oak doesn’t provide any answers in regards to what happens after our loved ones die, but they do provide a space to come together in meditation and community.

“Beyond the Physical” begins with deceptively simple lyrics: “It’s beyond the physical. We’re all headed somewhere.” Even in the two lines, the group’s cascading harmonies enrich the lyrics and tell us that there is much more to this song than meets the eye. The song picks up with percussive mandolin and reverberating chords before the entire group joins in to sing the chorus: “We’re all headed somewhere. It’s beyond the physical.” Lyrically speaking, the song remains peacefully simple. That’s where the video comes in.

The accompanying music video feels like the most cinematic home movie you’ve ever seen. Crystal clear shots of vibrant blue sky, lush forests, and a rolling ocean oscillate through the video as the band members carry their instruments and wooden chairs throughout the scenes. It seems like Under the Oak is reaching for a tangible metaphor: the chairs are something physical, something you can hold and understand. But this song surrenders understanding of what happens after death. The band accepts that there are some things we can never know for sure, only that “it’s you, it’s God, it’s love.”

With that, they fling their chairs into the frothy ocean. Under the Oak originally filmed the video without the beach scenes, but Adam Monaco felt something was missing. They ventured to Cape May, New Jersey in the freezing cold and added in the crucial ocean shots that complete the video and give it a deep resonance. The ocean — much like the afterlife — is deep and unknowable. It is only right that it be featured in this video as a way of conveying the beautiful and difficult task of letting go.

Check out the video below. Under the Oak plays Ardmore Music Hall opening for Larry Campbell and Teresa Williams on May 5th; tickets and more information on the show can be found at the XPN Concert Calendar.