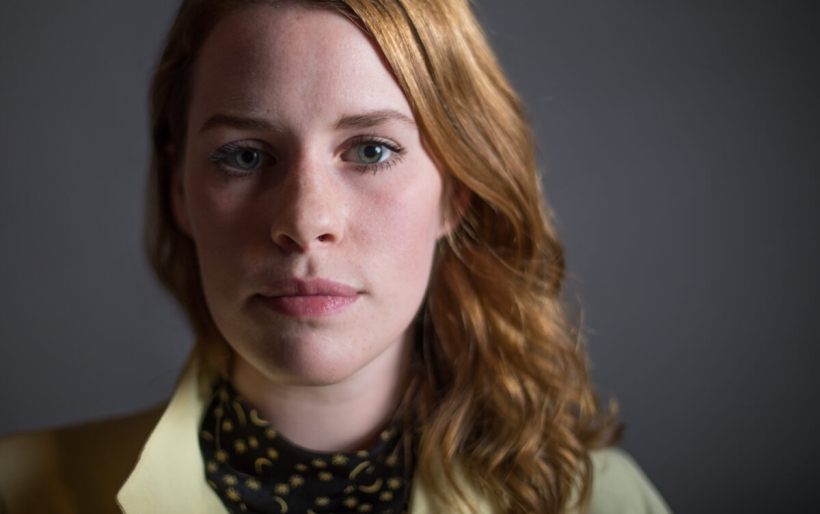 “High Key” is a series of profiles conceived with the intent to tell the story of Philly’s diverse musical legacy by spotlighting individual artists in portrait photography, as well as with an interview focusing on the artist’s experience living, creating, and performing in this city. “High Key” will be featured in recurring installments, as the series seeks to spotlight artists both individually and within the context of his or her respective group or artistic collective.

Posing for some portraits at XPN studios, Lucy Stone calls attention to her sunshine-yellow jacket, and volunteers that her mother said it wasn’t her color and warned her against it, before the singer affixes her own punchline to the narrative, unironically: “That’s why I wore it.”

Having played with local indie rock faves DRGN KING and Sad13 before then striking out on her own for awhile, the Philly native has planned some stage time in the coming months with new crew Vexxed, supporting tracks they recently laid down at a Drexel studio with compositions she’d written when she was 16.

And she can rock her yellow jacket if she wants to, along with a uniquely frank wit and deadpan humor, demonstrated by her response to a mention of her stern portrait visage.

“Good,” she confirms. “I want people to be afraid.” THE KEY: So you’re from outside of Philly?

LUCY STONE: I’m from right outside of Philly — Wyndmoor, Pennsylvania — which is next to Germantown, kinda. That area. Northwest.

TK: So you grew up in that area and you went to high school there?

LS: Went to high school out there. Went to Drexel for four years. Haven’t left Philly. I moved here eight years ago, when I was 18. But I’ve been a little Philly kid since. I was allowed to take the train by myself. [laughs]

TK: He moved into the city like with what area?

TK: How did you first get into playing music. You’ve been playing since you were 13 or something?

LS: Yeah, I just started playing — my mom got me a guitar on sale. Well, she got herself and me a guitar. Hers was the steel-string, she got me a classical one. I hated it. I wanted it to be louder. So then I stole hers.

TK: You stole her guitar?

TK: Was it an electric?

LS: It was an acoustic. It was an Ovation, which is pretty . . . [whispers] cringe-worthy. But they were on sale. My mom’s thrifty.

TK: I remember in college thinking the Ovation was so cool, when I was starting to play.

LS: The problem with them is that like the back of it is so rounded. That’s stupid, like guitars already aren’t made for women and then they just like add an extra weird like . . . thing that slides down you. So the whole time I was playing I would just be like, turning it. Should’ve just duct-taped it to myself.

TK: Did it have one of those like, built-in pick-ups things that you plug in?

LS: No, thank god. But I did have a little insert thing, if I needed to do that, I could put it in.

TK: So it was acoustic, so when you say “louder,” you meant in contrast with the nylon strings that you were playing on the classical?

LS: I don’t know. My dad told me the other day that the first song I learned how to play on guitar was Black Sabbath. I think it was “Paranoid,” because it was all on one string. So that. And then I was really into the White Stripes. I started fingerpicking all the hits, a little bit. TK: How do you remember first getting into the music scene in Philly, and who connected you to people?

LS: Well, I went to a music camp in Bryn Mawr called Summer Music Programs, and it was like rock band camp. So you got to learn a bunch of songs with other kids your age and then record them and then play a show in Love Park on Friday. It was like all summer for like eight weeks, and you got to be in a different band every week. And through do that I met a lot of people, but I think the number one thing that got me playing music was I messed met my best friend on MySpace. And she was 13 and I was 14, I think, and that was like the first band we started. It was called Uke Ellington. And we only played either really small instruments, or really big instruments. [laughs] Like ukulele, small parlour guitars, mandolin, and then upright bass.

TK: So was that a legit band?

LS: It was a legit band. I like to think so. We had four original songs, none of which ever got recorded. We played a lotta cool shows though. Lotta house shows.

TK: So was that the first time you played out, with that band?

LS: I don’t even know. I think the first show-show I ever played was when I like joined my friend’s ska band for a week. We got to play near Festival Pier, and I’m pretty sure Devo was playing, and like maybe Reel Big Fish? We were on the stage that was on at like noon. And I just stood there and I didn’t even touch the mic. Because I didn’t know you were supposed to. [laughs] I was probably 13 then. I was guesting. I wouldn’t bring that one up. That’s lame. [laughs]

Our first, like, really big thing — Uke Ellington got to open up for the Dirty Projectors though one, at Haverford College. And Cymbals Eat Guitars also played that show.

TK: We’re you like nervous, how’d you feel playing for a Philly crowd that night?

LS: I was probably pretty nervous, and I used to not speak on the microphone — I refused to, and I would just let my best friend Jamie do all the talking. She’s really funny but wouldn’t sing loud, and I wouldn’t talk and sing really loud. [laughs]

TK: Okay, so, you were nervous — like no-stage-banter nervous – but you were fine performing.

LS: Fine performing, yeah, I just couldn’t talk. I still can’t speak in public. It’s one of my biggest fears. I just need to have something to do. [laughs] That’s why I started playing guitar, because I didn’t know what to do with my hands, while singing, most of the time. TK: Do you have a favorite place to play in Philly?

LS: So many times. Within the last like year-and-a-half, I feel like it’s been at least eight times. But not the same band every time.

LS: All my friends work there. [laughs] I feel like there’s never any bad shows. It sounds so good. It looks so good, the lighting’s great. They don’t turn the fog machine on if you want them not to. [laughs] (It always bothers me.) And I like their hummus.

TK: All good reasons. So in terms of the arts community in Philly, what would you say is an advantage, or something that’s characteristic of being in Philly that you think is a benefit to you as an artist?

LS: I think that everyone does a little bit of everything. Or at least everyone has done everything, at some point in time. There are so many people to draw from, and I got to be in so many bands when I was in college, and out of college, with people who are kinda all over the place — all different genres, different experience touring — and I got to learn a lot from them. Most of the people I’ve played with have been a couple years older than me, in most of the bands have been in, so I’ve gotten to learn a lot from them. And it seems like everyone has been in someone’s band or know someone. I feel like there’s no singular musician that you’re not like at least one or two degrees away from, in some sense. Very accessible. For me it was. [laughs]

TK: What about disadvantages or frustration, that’s characteristic to Philly?

LS: Probably that people don’t view it as important in like a musical way, as they do cities like New York, or like other places where there’s just more people. I feel like Philly, there’s so much music, that people kind of maybe get a little overwhelmed? Because people are like “name three Philly bands,” I’m like how ‘bout I name forty? [laughs] Like that are really good, I should play a show with! Like there’s so many! There’s so many shows. I think if anything maybe there’s so many shows going on in one given evening that you just can’t get to them all. People don’t realize how much is going on here half the time, because they’re not here! And they always just think people in Philly are mean! And we are. But.

TK: True. Also, that’s good segue to my next question because I’m going to ask you to pick a favorite Philly artist. Could be two, if you want. Not forty.

LS: Not forty. Well, I feel like the musician who’s had probably the most effect on me personally, as a person, is my old bandmate Dom Angelella — from DRGN KING and, he was in mewithoutYou, he currently tours with Lucy Dacus and Natalie Prass — he taught me so much about touring, as well as my other bandmate Ricardo [Lagomasino], who was in that band as well. And he has always been super supportive of me and always just like so positive, such a positive influence. And he took me on tour when I hadn’t played guitar in like two or three years — because I’d been in a band where there was already enough guitar, so I only had to sing and that was really boring, but I feel like I lost some skill there. But he kind of was like no, it’s okay, we’re gonna go on tour and you’re gonna play guitar and you’re gonna be fine. And I was like, you’re wrong! And he was like no. It’s gonna be okay.

And then other than that, I think like my favorite Philly band is Hop Along. But, that’s probably everyone’s answer.

TK: It’s come up a couple times, but not everyone’s.

LS: [laughs] Yeah, and also Tierra Whack, but that’s more recent. I didn’t know about her until this year. TK: You said you’ve lived in the city for nine years now, in what ways have you seen like the city change, and you think it’s for the better or, not so much?

LS: Well, I feel like, artistically, yes, it’s getting so much better. Because at least as I’ve seen, there’s kind of more of like a network, in which people can build their own kind of like band or team of people, people they want to work with that are all centralized in Philly. But I think all the new construction’s really fucking ugly. [laughs] So that’s bad.

TK: Do you mean Fishtown, and places that are being developed with condos?

LS: Fishtown, yeah, they keep building those like, faux, Ikea-looking, kind of like mail-order homes, they all look the same. Fishtown’s pretty boring now. Too many yoga studios. Too many — I still don’t know really what “fro-yo” is. Like, is it yogurt, or ice cream? Can there be non-dairy fro-yo? There’s like seven of them on Frankford Ave now.

LS: [whispers] I still don’t get it. But also, I’m a little lactose intolerant, so. And they haven’t fixed the subways yet. So I guess, yeah. Still kinda shitty. 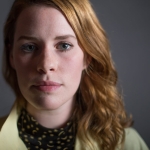