Guitarist-composer Matt Davis is at home with Big Family - WXPN 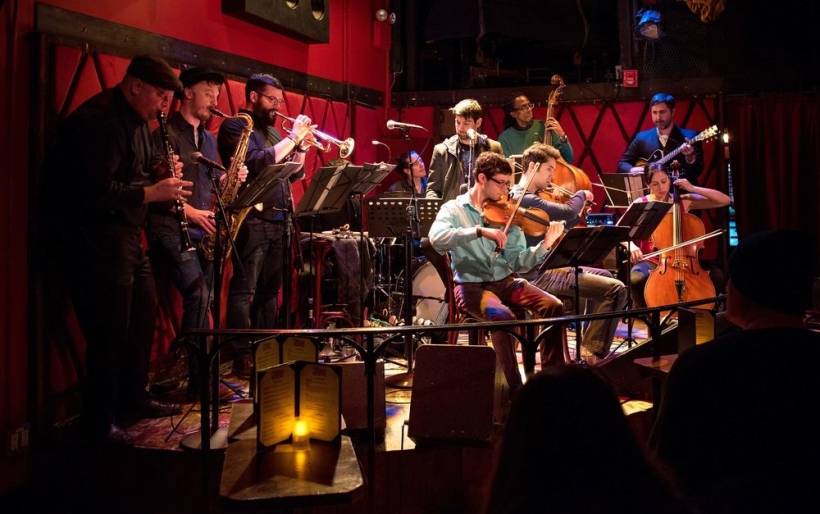 Guitarist-composer Matt Davis is at home with Big Family

Limiting smoldering guitarist and kinetic composer Matt Davis and his floating membership ensemble, Aerial Photograph, to “jazz,” is like trying to make ice on a roller coaster: its fluidity cannot be contained due to its insistent motion, both literal and figurative. “I call it ‘jazz-adjacent,’ for better or worse,” said Davis, who came up through “the tradition,” and mostly continues to follow that lineage. Thinking of his newest album, Big Family, and its bent lines of improvisation, this is hardly you standard sense of swing, bop, or balladry. “The name ‘jazz’ is a drag, if only for the reason that it just doesn’t mean anything anymore. It’s more of a tradition and lineage than a style. How else can Robert Glasper and Eddie Lang be in the same aisle?”

At turns elegant, eloquent, immersive and deeply involving (to say nothing of Gil Evans-esque in sound and theory), the one-time Philadelphia musician/teacher and his ever-changing crew have long filled his albums and live shows with gentle stories of familys at rest and in transition — his own, those of immigrant communities, or members of the military, as with his newest song, “Air Mail” — and of the more provocative elements of how these knit-together households act toward each other and the world around them.

There’s a reason that Davis has called his new album Big Family, a record he’ll debut at a live release party/event at The Rotunda on March 1.

“Nostalgia: that’s a big one for me,” said Davis from his home in New York City when asked how Big Family refers to the grouping of parents, musicians and teachers he grew up with in Philadelphia. “But nostalgia is just one part of the equation, I think. It’s also about my connection to others, context, purpose, feeling part of a tradition, friendship, identity, and it feels accurate to account for all of these threads by thinking of it all as iterations of family.”

Davis, a Manhattan School of Music’s Masters program grad whose current crop of Aerial Photographers are mostly from NYC, talked briefly about his past, the Philadelphia he moved from, in 2008. “I came from a farm in September 1997 to the Temple U campus, and I could not have been more uninformed about music and naive about life,” said Davis. “The city was nothing but nurturing. I ‘came up’ there, and learned how to play there. How to write music there. How to practice.”

Davis spent his wild youth in Philly, running around chasing music. “It kicked my ass in a lot of ways and made me more of who I have become, which is the best outcome ”

As far as how this all translates to the present of Big Family, Davis claims that it could be in a million abstract ways, as it does in all the songs he writes and the arrangements he plays. “Specifically though, the song ‘City of Age’ was written in 2008 about elderly Philadelphians with whom I had conversations. ‘Nondum’ was written when I lived in West Philly and reading the poems of Girard Manley Hopkins all the time. Also, I think the time I spent learning from Dennis Sandole, and playing with Odean Pope and Bobby Zankel’s large groups, and the way they bring their harmonic vocabulary to life, informs me in this kind of large ensemble format.”

“Philly is a part of everything I play,” said Davis.

Leaving Philly and evolving as a musician and arranger has been crucial to Davis’ art, whether on this, his newest album, or any before it. His arranging skills, in particular though, have developed, in that he now truly exploits the range of an instrument’s capabilities.

“I learn a little more about music and sound with each thing I arrange, so extended techniques, atonal textural things, bending pitches, and wide swings of volume and dynamics are really interesting to me,” he said.

There’s musical growth, and then there is personal growth. I mention to Davis that I interviewed guitarist Gary Clark Jr. right before him and asked the Texan about the new frankness in his music. He blamed his kids, and went on to state that having children make it so you must stand for something real, and present as much in one’s music.

“Being a father definitely changes my outlook as a musician,” he stated. “But it changes my outlook on so many things, I think the music is just a manifestation of all of the other life changes. I have to be more organized with my time, so my composing process can’t be as much oriented around ‘when I feel it’. I have to be a little more proactive with getting things together.”

Being able to be more proactive also means that he must write a lot of his newer music while practicing and studying the guitar, an idea that is endlessly fascinating and beautiful to Davis, and a process that seems to humanize the musical form to an even greater musical degree than it once was. “From there, I broaden out the musical ideas to include other people and ideas,” said Davis “I always love to write for people – not instruments – and I’ve been lucky to work with a lot of great musicians with whom I’ve been able to do this.”

Before he splits, Davis states that the Aerial Photograph musicians on Big Family are all dear friends with whom he places a ton of trust. “Which is good when you are trying to push the edges of what’s going on in the music,” said Davis of his musical fellaheen Leon Boykins (bass), Peter Kronrief (drums), Josh Lawrence (trumpet), Mark Dover (clarinet), Remy Le Boeuf (saxophone), Eugen Kim (violin), Ben Sutin, (violin), Takeshi Horochi (viola), Susan Mandel (cello) and vocalists Samantha Rise and Kyle Knuppel, Davis tells me he can’t wait to play with these people with the enthusiasm once would reserve for seeing their extended family.

“I love playing in all settings, but truthfully, 90% of the music I make often feels recreational, if that makes sense,” says Davis. “It’s great, I’ll always take it, and I’m always happy to work, but it doesn’t feel like the really meaningful stuff that I live for — where when it’s happening I feel more alive than I do at any other time. It’s affirming in every way. And when it’s done, I feel like I know something more about myself and the world. It’s a real journey. I’ve felt that with all of the people who are playing with me this Friday. I’m pretty sure that they all feel the same way. I’m grateful to have these musicians with me who are also hunting for the journey like me.”

Matt Davis’ Aerial Photograph plays The Rotunda on Friday, March 1st. Tickets and more information on the performance can be found here.