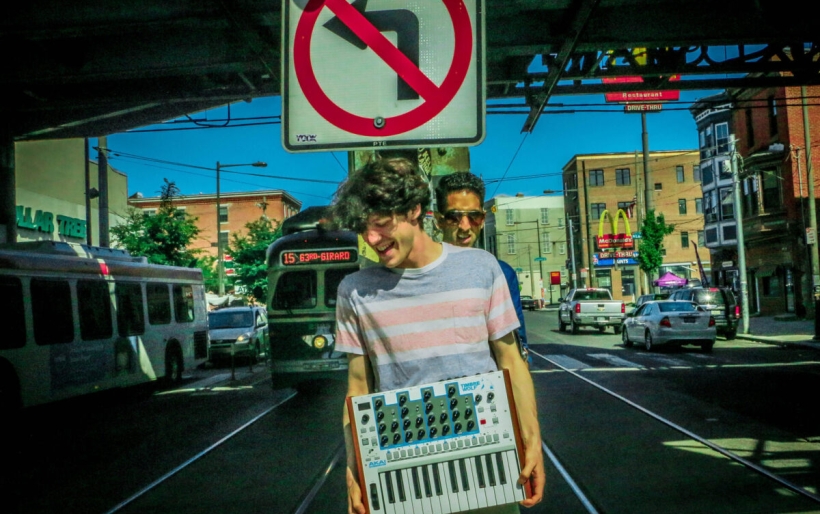 Trap Rabbit | photo by Kuf Knotz | courtesy of the artist

Philadelphia alt-jazz duo Trap Rabbit are back again with an electrifying new song that will make you question why we ever invented music genres in the first place. Their new music video, “Upward Mobility”, delights as bandmates Arjun Dube (drums) and Logan Roth (keys) stack melodies on top of melodies until an entirely new and fresh sound emerges. Trap Rabbit’s sound is hard to pin down, but that’s the fun of it. It’s a synthesis of jazz, funk, hip-hop, and rock that ranges from dance inducing beats to near-lyrical contemplations. This new video features all of it without apology or compromise.

The video was shot by Skyler Jenkins at Rittenhouse Soundworks in Germantown with engineer Michael Cumming. Working with a team led by Jim Hamilton, Trap Rabbit remarked that the environment in Rittenhouse Soundworks encouraged “playful experimentation.” That sense of play comes through in the video, as Dube and Roth rock out to their music. The video takes off with a declarative statement from Roth on piano just before Roth flies away with an arpeggiated melody. Dube joins in with a steady beat and fluid fills. It doesn’t take long for the two to elevate the established melody and stack on new elements.

Throughout the song, the piano is fast and furious while the drums boost the piano from underneath and even steal the spotlight several times. The video is “mostly live” as some synth beats were dubbed over the live performance. Still, the added elements enhance rather than distract. At the two minute mark, colored lights flash on the players and the video breaks into three frames. Here the visuals reflect the group’s sound and create a kaleidoscope of sight and sound.

Don’t be fooled: high-octane rhythms aren’t the only thing Trap Rabbit can do. At the five-minute mark, Dube and Roth slow it down and allow the listener to catch their breath. This calm passage is infused with just as much passion as the frenzied section and the contrast it provides helps the listener appreciate just how intense this song is. Pieces like this defy categories and, really, it is a disservice to label something that clearly is coming from a place of joy and musical exploration. I will say, however, that Trap Rabbit is ambitious. You can hear how they push themselves and this video is proof of their musical athleticism. And, most of all, it’s just plain fun.

Check out the video for “Upward Mobility” below. Trap Rabbit will open for Nat Wood’s fOUR project at Ortlieb’s on March 9. Gnarbot is also on the bill, and more information can be found at the XPN Concert Calendar.