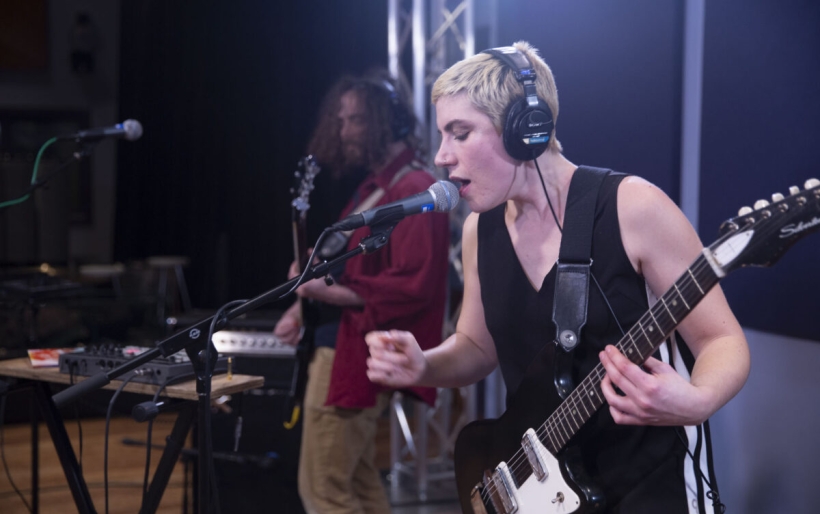 In the near-decade that we’ve been recording The Key Studio Sessions, Philly’s Lizdelise may be the first artist to make their debut performance as a solo performer and return as a band. But singer / songwriter and guitarist Elizabeth De Lise has made a serious evolution over several years on our radar; from the storytelling jazz / pop of 2014’s To & Fro, to the headier loop-driven nature of 2016’s self-titled sophomore record. De Lise’s first appearance in WXPN studios with bassist and collaborator Mark Watter was otherworldly, yet grounded and accessible: as I described at the time, “the set swallows you in sound, with layers of vocal rounds floating alongside askew lead guitar.”

De Lise’s career path in the time since has taken off on an yet more exciting path, branching out into other artistic disciplines — particularly theater and dance. She performed as a guitarist and vocalist in La Medea by writer and composer Yara Travieso, and also worked on scoring in David Dorfman Dance and Liz Charky Dance. When we’d run into De Lise around town in 2017 and 2018, she would talk excitedly about darting back and forth between Philly and Brooklyn, the stress of dividing her life between two cities as well as the euphoria of participating in a production that’s completely different in in scale and ambience than an indie rock show.

At the same time, she was eager to return to her band — and that was how she was viewing the what the project had grown into. She was no longer Liz De Lise, a person who shreds and manipulates effects pedals to build soundscapey pop songs; she was one pillar of Lizdelise, a collaborative trio that features Watter, as well as drummer Taylor Cullen.

Last month, the band released the Holy Matrimony LP, a set of inviting songs that draws you in with innovative sound and brings you along for its exploration of human interaction in the 21st century: our review of the album noted that “Holy Matrimony draws on imagery from traditional cishetero relationship-building in its lyrical vignettes, and seems to question the narrative that those traditions are the only way through life.”

Opening the set with the driving “Boy,” the band explores hard-learned life lessons through the eyes of a child — or rather sees a piece of themselves in a crying boy in an airport lobby, torn between his parents. It’s a gripping image, a strongly-set scene, and the band continues this approach across the four songs they highlight in their performance. The yearning hunger of “Sated” and “Tell Me” follow, as well as the despondent and self-reflective “Probably Die,” where the song’s narrator comes to a moment of self-aware reflection after rejection: “I wouldn’t know how to handle me, either.”

Watch a video of that song above, listen to Lizdelise’s entire performance below, and grab yourself a download of the album here. The band plays the next House Key Showcase at Underground Arts on Saturday, March 23rd, with Strawberry Runners and Snake Boy Gang. Tickets and more information on the show can be found at the XPN Concert Calendar.