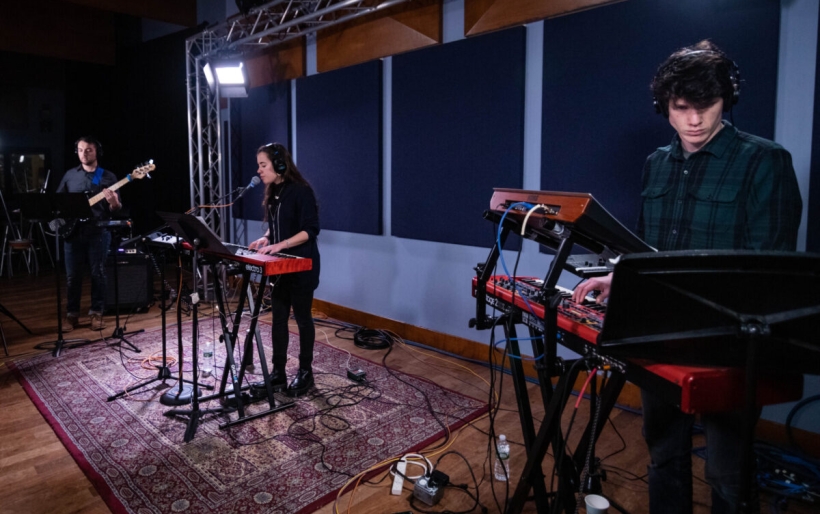 Making music is a process of constant re-invention. Meticulously crafted studio recordings are re-shaped onstage, the onstage energy influences the direction of the next studio recordings, and the cycle continues back and forth over an artist’s lifespan.

Sophie Coran has already experienced quite a bit of that in her four years as a singer and songwriter working around Philadelphia. Her earliest work, the Better EP from 2015, took on a piano-driven identity in the vein of Carly Simon and Paula Cole. Last year, her follow-up, All that Matters, folded in elements of jazz and soul. And as Coran began playing shows around town in support of that release, she connected with Logan Roth and Arjun Dube of the experimental instrumental band Trap Rabbit. They became her live band, and the chemistry she developed with them — as well as bassist Mike Morrongiello — pushed her music into new realms.

The recent “Duller Star” single is the first example we’re hearing of collaboration. It’s a song that breathes in a husky tenor, its melodic skeleton fusing with Roth’s layers of synthesizer soundbanks and melodic leads to create an arty pop air reminiscent of Fiona Apple. There’s also a rhythmic pulse, care of Dube, that isn’t too far off from the crowd-galvanizing concepts of EDM.

Watch the video below as the song opens on a solitary Coran, playing her Nord and singing about a cigarette abandoned on the nightstand. As the verse progress, Morrongiello’s bass enters along with Roth’s keys, gently at first, and then becoming more defined. They unite with Dube’s drum stand pings and light rhythms, until the cymbals emphatically swish, then breathlessly cut to silence at the end of the pre-chorus. The beat drops. The song is under way. And as I said in an NPR blurb about Coran earlier this week, it will “in its own, downtempo jazz-pop kind of way, get you moving.”

If it seems like a stylistic grab-bag, that’s exactly how Coran prefers it. She’s a fan of modern songwriters who don’t fit squarely in songwriterly convention. When I saw her play The Barbary upstairs in the fall, she covered “The Weekend” by the dynamic SZA; in her Key Studio Session, Coran tackled another favorite, “Green Eyes” by Massachusetts multi-hyphenate Nick Hakim. She could conceivably own a cool jazz persona, like Norah Jones’ Come Away With Me; she could also do what Jones did and refuse to be pigeonholed into an identity, chameleonically shifting into country, or groove-oriented rock, or wherever her interests may lie at a given moment in time.

Rounding out the studio session are two unreleased gems from Coran’s songbook; “Circles” and “Saltwater,” both of which will make their way into the world in single versions as she builds up material for her next project-length release. Take a listen to them in Coran’s full Key Studio Session below, and see her play live at The Balcony Bar at The Trocadero on Saturday, March 16th. Tickets and more information can be found at the XPN Concert Calendar.