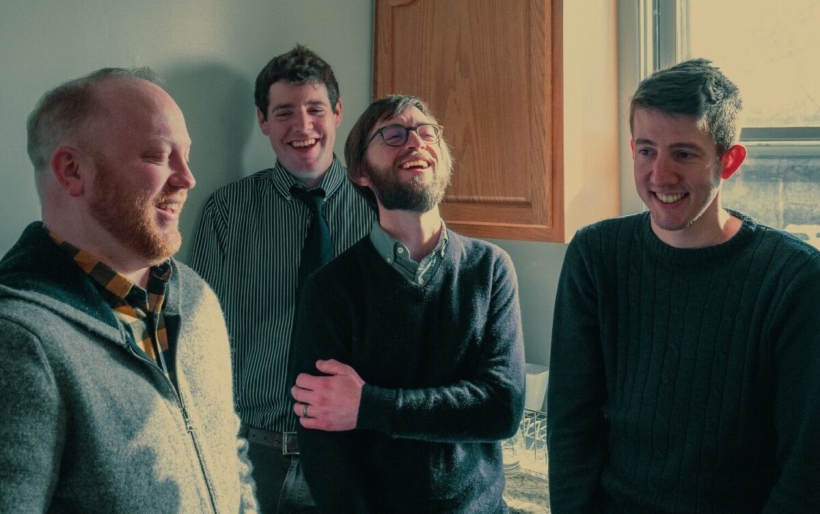 Spelling Reform | photo by Bob Sweeney | courtesy of the artist

Philly four-piece Spelling Reform is stretching out on its latest record, Stay Inside, beginning with the spirited indie rock we’ve come to know them and building it out into more expansive, contemplative jams in the vein of The Pernice Brothers and late-era Wilco. Recorded with Kyle Pulley at The Headroom Studio, the album will be released via Black Rd. Records on April 5th.

Today, the band released the opening track of Stay Inside, “(I’m Believing) The Same Thing,” an bright power pop dreamscape lifted up by synthesizer textures from new keyboardist Jim Gannon. Lyrically, singer and songwriter Dan Wisniewski uses the song to look at not only toxic masculinity, but the indifferent way other men react when confronted with it.

Driven by punchy playing from drummer Mark Rybaltowski and bassist Tom Howley, the song centers around the inner monologue of a person listening and reacting to his buddy’s locker-room talk. “The way that he tells it, it seems there’s a never ending noise. / At least one person is thinking to keep the fact-checkers employed. / What’s a lie with a friend? This is a conversation. / And that’s some one else’s daughter.”

As Wisniewski tells us over email, “The song digs into the passive behavior that makes up the worst parts of ‘male’ culture. The narrator keeps listening and believing his friend’s boasts about sexual exploits, even when they’re fabricated to some degree. Why does he react the way he does, and what is he doing with that mix of horror and fascination he feels? Like all the tunes on the new record, this song is less about judging someone else’s actions and behaviors and more about reflecting on what’s going on inside.”

Listen to “(I’m Believing) The Same Thing” below, and look for Spelling Reform’s Stay Inside to be released on April 5th. The band headlines Boot and Saddle on Friday, April 5th with Buddie and TIOGA; tickets and more information can be found at the XPN Concert Calendar.