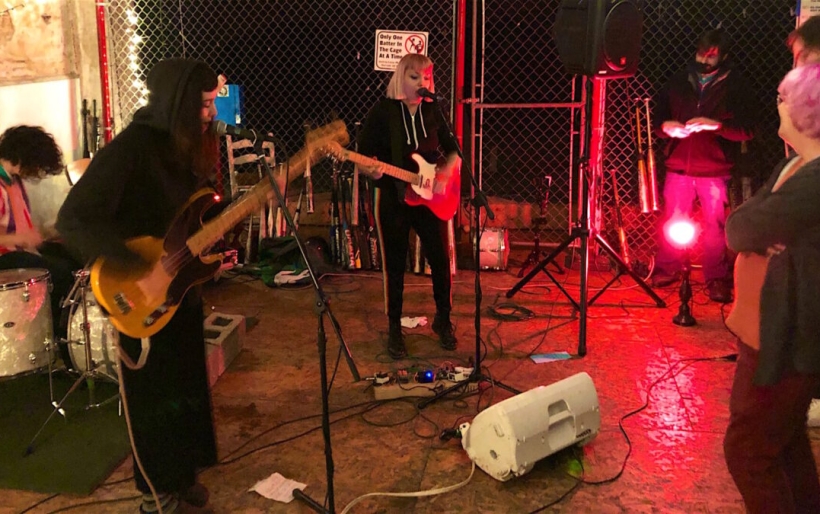 Philly rock three-piece Amanda X played their first headlining show in a minute this past Saturday at Everybody Hits, and alongside classic rippers like “Parsnip” their setlist boasted an exciting presence of new material. Two of those songs quietly slipped on to Bandcamp the day of the gig, and we bring them to you today for your listening enjoyment. (Hat-tip to our buds at The Deli for the heads up.)

There’s a raw tone and propulsive rhythm to both “Vivid” and “End of Days,” which were recorded with recorded by Dan Angel and James Ryskalchick at the dungeon. It’s a contrast to the polished and pristine Giant LP the band released in 2017, which was lovingly labored over for months at South Jersey’s Gradwell House, but both recordings are essential and honest documents of this asskicking Philly band — the LP showcasing their pop sensibilities and sharp playing, the single giving a look at the fierce urgency they can summon when there’s something they need to get out into the world.

In the case of these two songs, it’s a grappling with ideas of existence and monotony; to rapid buzzsaw riffs, “Vivid” expounds on the sensation of being stuck in space and time, while “End of Days” feels it clicking to a close while we’re unsure what we’re supposed to do before it ends (“what’s the plan for me, what’s the plan for me today,” goes the hook).

Take a listen below.