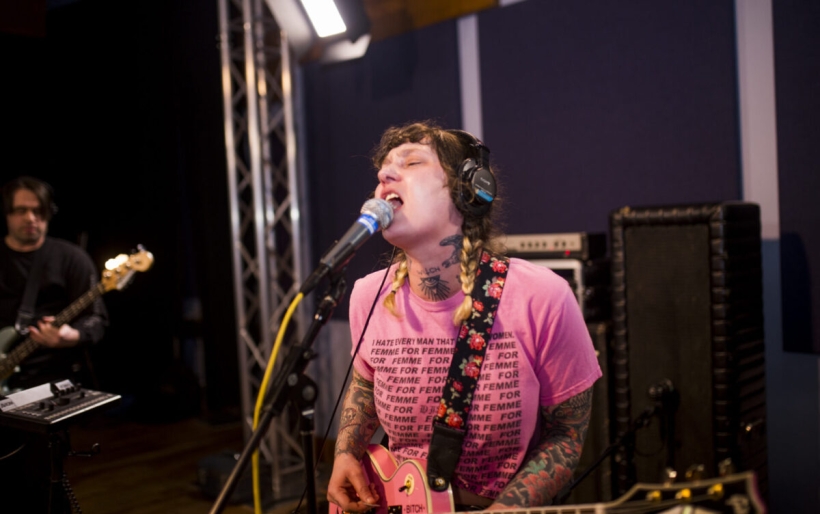 Like a lot of Philadelphians who encountered them last summer, I was completely taken by surprise the first time I saw Low Dose. It was one of their first-ever shows, it took place at the Everybody Hits batting cages, was headlined by the always-galvanizing Soul Glo, and found the bandmates setting up gear in the wake of an instrument-slamming set by post-hardcore ragers Great Weights — in other words, they were bookended by two fellow Philadelphia punk scene players who don’t skimp on the captivating energy.

Not that it was an obstacle. Frontwoman Itarya Rosenberg stood quietly holding the mic, a brutal guitar riff began looping out of the speakers, and it was like a switch flipped on — bandmates Mike McGinnis on guitar, Jon DeHart on bass, and Dan Smith on drums launched into a crushing jam, Rosenberg crouched to the floor, and howled. I stood to the side, next to Great Weights’ Meri Haines, and we both watched drop-jawed and awestruck. Twenty minutes of poppy hooks, dissonant freakouts, and general punk catharsis later, we looked at one another all like “What the hell was that?”

Low Dose, to put it lightly, knows how to make a formidable first impression. This commanding stage presence led them from opening gigs — like this one, or the one they played with Restorations at the First Unitarian Church — to their first solo headliner at Kung Fu Necktie late last year. It led to their self-titled debut full-length, out next week as a joint release between Knife Hits and Brutal Panda Records. These bandmates are clearly no rookies; they’re seasoned players in the punk and hardcore scenes. But who are they, exactly? At one level, they’re four friends who teamed up when the gods of timing shined in their favor.

McGinnis, DeHart, and Smith previously played together as Fight Amp, a grungy punk trio that played its final show in 2016. The disbanding was not acrimonious, the bandmates just felt the project had run its course — even though they still wanted to make music together. They tapped their friend, vocalist Rosenberg, whose band Legendary Divorce had played Fight Amp’s farewell gig, and they began to casually collaborate in their Fishtown practice space. Rosenberg was in the middle of a tumultuous time of her life, going through her own actual divorce, and its world-shattering effects became fodder for the lyrics she was writing for Low Dose.

All that pent-up anger, frustration, hopelessness, and rage finds a release in Low Dose’s gutting, emotional debut record, as well as their live sets — you can see it in the above video of “Sinking,” recorded live for The Key Studio Sessions. The song is already roaring and racing, with Rosenberg and McGinnis swapping vocals about feeling trapped and isolated, suffocating in a toxic environment, when the music breaks into a free-form noise jam at the three-quarters point. The three bandmates with stringed instruments head directly to their amps, jam the necks along the speaker, and begin strumming and scraping their strings feverishly. At the drums, Smith is moving in 180-degree rotations, ambidextrously slamming different parts of the kit, goading the rest of Low Dose on until it comes to a breathless finale. Rosenberg and McGinnis are both on the floor catching their breath as the humming amps cycle down. Slowly, everybody gets up and walks away.

In addition to that gripping grand finale, Low Dose played three other tracks from their record at WXPN studios — the thundering “Right On,” which dovetails into soaring anthem “For Sure,” as well as the simmering low point of “Low” (the band’s quasi theme song, as it were). Through all of these songs, Rosenberg makes her pain felt, but not in a narcissistic way: as I put it when I wrote about the band on NPR Music earlier this month, the album “might come from a deeply personal place, but it puts [her] experience on a broader scale, reflecting on the cycle of abuse, on manipulative behavior, on vindictive misogyny, and the ways that a gutting personal low can help one find inner strength.”

Listen to Low Dose’s Key Studio Session in full below, and grab a pre-order of their album at Bandcamp. Low Dose headlines Johnny Brenda’s for its album release and tour kickoff on Thursday, April 4th; tickets and more information can be found at the XPN Concert Calendar, full tour dates can be found below.