Mumblr returns from the great beyond for a new (final?) album, Genie, and a new video for "Game Show" - WXPN 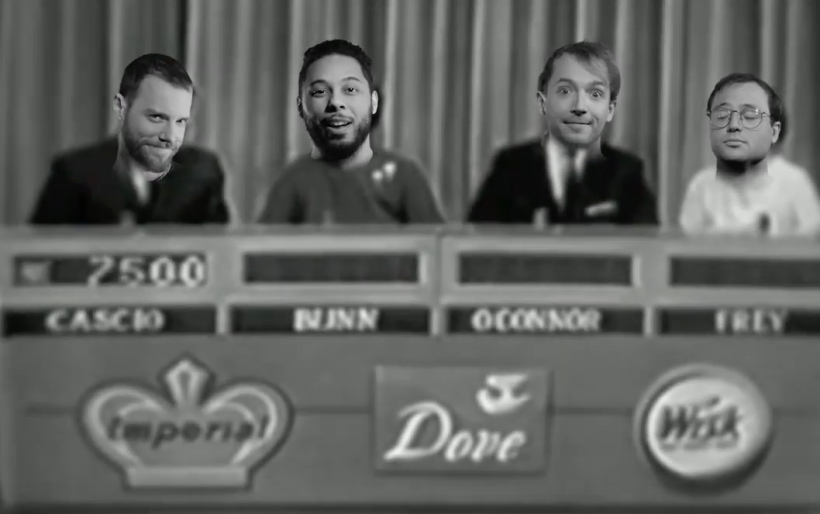 Mumblr returns from the great beyond for a new (final?) album, Genie, and a new video for “Game Show”

Things have been quiet in the world of once-ubiquitous Philly DIY rock four-piece Mumblr since they wrapped up a tour in late 2016 and played a sold-out Johnny Brenda’s show with The Districts. Not that they haven’t been busy — drummer Scott Stitzer in particular has been recording and mastering several projects, and has drummed in Curtis Cooper’s power trio, among other acts.

But Mumblr remained bubbling in the background, and next month they’ll return with their first album since 2016’s The Never Ending Get Down. Titled Genie, it will be released on April 1st, and the band gave it a bit of a teaser this week with a goofy music video for “Game Show” which depicts the bandmates heads superimposed on vintage game show footage. Unlike the Mumblr of yore, which was typically hard-hitting out the gate, this one starts off tentative and reserved with breezy beats and clean-tone guitars as frontperson Nick Morrison sings about struggling to think of the correct answer on a quiz show, battling the countdown, and realizing “it’s just a waste of my time, a waste of my time, a waste of my time.”

This existential malaise seems to transfer to life in general, and as the song kicks into full-steam-ahead classic Mumblr rager mode at the halfway mark, Morrison begins singing about mental health struggles and therapy, it’s clear this image is Mumblr’s attempt to uncover the best path through life — even if it’s not the conventionally-prescribed one.

The song is a spirit-raiser, but it also drips with frustration and finality. Likewise, there’s a tone in its YouTube description that implies that this may be the end of the road for this Philadelphia band, and they’ve emerged from the great beyond this spring to leave us with one last record:

It has been a fun ride sharing good and better and best times with beautiful people across this North American continent. Like? Comment? Subscribe? Sure, why not? Make sure to always boof your LSD with help from a good friend or a worst enemy! A most sincere thank you to all the folks who have helped us over the years, whether it was a place to play, or a place to stay, or a shoulder to lean on, or spending time being open with each other about emotions in these years of tumult over a meal. May the greater order and chaos of the universe shine upon you all. It’s been fun!