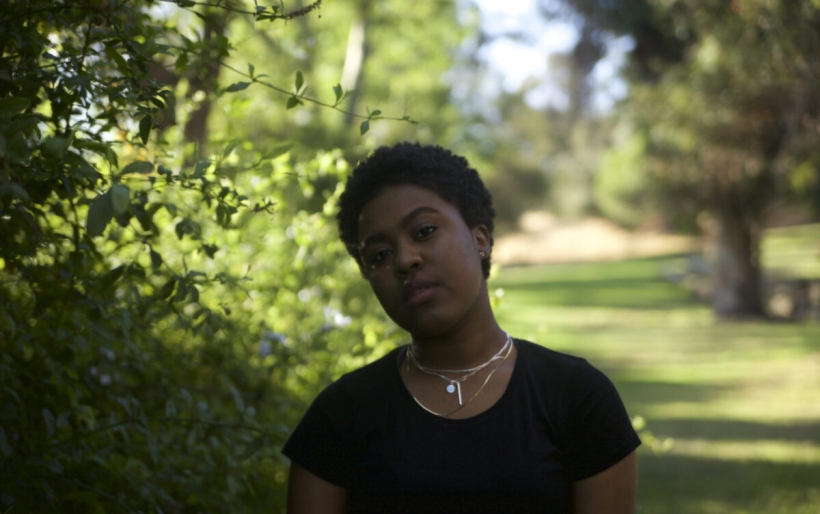 Passing by with Christinna O

Two years ago, Miami native Christinna O made her way to Philadelphia, not only to attend Temple University, but make a name for herself in the music scene. The alternative R&B singer was already a skilled wordsmith, and it probably helped when she joined Temple’s poetry team Babel and competed in the NAACP’s National Poetry Slam. But more recently, it seems that Christinna O seems ready to get people clapping for her singing instead of just snapping their fingers for her poetic lines.

The end of last year, she released the first single for upcoming EP Girl In Passing,“Shelter”, and has recently released the second single “Lay It Down.” While Christinna O prepares for the arrival of her second EP, we were able to sit down with her to talk about her early beginnings and what her listeners can expect from Girl In Passing.

The Key: What was the music scene like in Miami?

Chritstinna O: Pretty non-existent. The thing about Miami is that, when it comes to art especially, everything is Miami art. So when it’s visual art, Miami art is pop art, and that’s the genre that you’ll always see, nothing else. When it comes to music, it’s always been very EDM driven music or it’s been reggaeton, bachata, very Latin-driven music, because the majority population is Latin. So it was kind of very narrow, there wasn’t an array of artists in Miami and genres and scenes that catered to different types of music. It was only this one type of music that was known for Miami and it was a little hindering for an R&B artist to be growing up in Miami.

TK: You love the music scene that lives in this city. What is about Philly that helped you avoid the issues you faced in Miami?

CO: Philly caters to a lot of genres that show black and brown faces. I came here fall of 2017 and immediately got into the art scene as far as my poetry and music. There’s a lot of amazing people that are in the area of hip-hop, jazz, and R&B which are more of my influences making this city the perfect nest for my sound.

TK: Did writing come before singing?

CO: Yes. Now I definitely wanted to be a singer before I wanted to be a writer, but the writing came first. I was always writing poems, and then when I got into the love of music, I figured out that I could write my own music because I’m a writer.

TK: You’ve said you’re inspired by Aaliyah, Frank Ocean and emo punk bands. How have any of these acts helped inspired your writing?

CO: Writing wise, I think my biggest writing influences came from actual literature and paged poets. When you think about the James Baldwins, Audre Lorde, Lucille Clifton, some of the revered black poets of our time, those are mostly the people I was influenced by for writing. As far as for songwriting, I draw my biggest songwriting inspiration from my favorite emo punk bands. If you listen or read the lyrics to a lot of emo punk songs, they’re very poetic and very in-depth rather than just generic surface lines. If you listen to an emo punk song about a relationship and what the relationship was about, versus a song that may exist in the R&B genre, the diction is very different and one touches a little bit deeper and I think that’s were my influences come in.

TK: What was it like recording your first project?

CO: I begged my dad to give me some recording equipment and got it the Christmas of 2013 or 2014. The following year I just learned how to cut vocals and record on my own. Then I took producers who were giving away free beats on YouTube and put together this 13-song EP called The Violet Tape. It was great because those were all of my first songs that I wrote, and a great exploration to figure out what a Christinna O song sounds like and I got the perfect idea of that.

TK: You said that poetry can make a song too convoluted to a mass audience. When did you learn this?

CO: I think it was soon after I did The Violet Tape. I was 14 when I dropped that mixtape and then I continued to drop sporadic singles on my SoundCloud while in high school. And I would pay attention to the songs that resonated the most with my local listeners. I had a song called “Opposite,” which is the biggest track on SoundCloud that I have to date. People related to it and I realized that when you understand the lyrics, that’s when the resonating starts to happen, rather than when you try to fit all of those words with all those other elements like production, vocals and lyrics. It’s a lot and sometimes you’ll lose your audience and your whole purpose for writing the song in the first place if people don’t get it.

TK: I read that you were home-schooled when you were young because of bullying. Did The Violet Tape help you express those emotions at the time, or do you feel like you’ll go more in depth on Girl in Passing?

CO: I think for The Violet Tape, I did not explore in-depth those painful things, but it was still helping me process and cope through that. There’s a lot of isolation in home schooling, so just making that music through whatever concepts that I was coming up with randomly — whether it was about something that was happening at that time or not — it was important for me to just be creating. I did this EP on SoundCloud that I released when I was a senior in high school called Abide and I touched more on that subject there. Even with this next project coming up, I’m thinking about going forward and getting more vulnerable and telling more stories that I haven’t done yet, whether they’re older or new.

TK: What is your experience like when you’re that open while recording?

CO: I struggle when it comes to getting in the studio and being a hundred percent vulnerable, but I’ve noticed that it’s easier to to get to that point when I’m recording and creating alone. When I’m with a bunch other producers, I can get really closed off, self conscious about it and it becomes harder to get to that point. However, when I get there it feels therapeutic and cathartic and those are always my favorite works. The songs that I know that I was most open on are usually my favorite songs, “Lay It Down” was one of my favorite singles because I was really feeling that in that moment and felt like that vulnerability was shown in that song.

TK: Do you feel more comfortable performing spoken word, singing, or are they both equal?

CO: I have more experience in performing poetry, I’ve been performing and competing for the past five years. As far as music, I have not been performing my music for that long. In fact, this is like the first year or two of me doing that. It’s a little different usually, because my anxiety in thinking of what things can go wrong in doing a poem versus what can go wrong when singing. During a poem, the worst thing that can happen is I may forget my lines, but with singing I can have mic or vocal pitch issues and forget my lyrics, which usually never happens. There’s a lot more things at play that I have to be aware of while performing. I also have the anxiety of making sure I give people the same experience they had when they were listing to it in there phones, if not better. But I’m growing in that and taking every chance of performing to add something better.

TK:  You said Girl in Passing is your way of saying “I’m just passing through, but here’s what I’ve felt and saw.” “Shelter” you talk about emotional security and “Lay It Down” you discuss the feelings of putting it all on the table to end a fight between you and a significant other. What other types of experiences can your listeners expect to hear on your upcoming EP?

CO: When I finished this EP, I didn’t realize how much I talked about betrayal. It gets talked about a lot even in “Shelter” and how it always happens when you’re the most invested in some type of relationship whether it’s a friendship or a romantic relationship. Those things always stick with me the longest, not only betrayal but lost in general. For whatever reason, the loss is usually what I’m talking about, but growing up seeing people for people and interacting with people differently, especially now as an adult, its wielded a lot of different things. There’s this track called “Blade” that really talks about not expecting the betrayal or the violation of trust from someone close to you. It talks about how the blade cuts when its closer to you, that’s the hook “The blade cuts when it’s closest to you / and good things are only good if they’re true.” That’s one of my favorite songs off the EP. I’ve also talked about mental health, something I’ve struggled with since I was an adolescent.