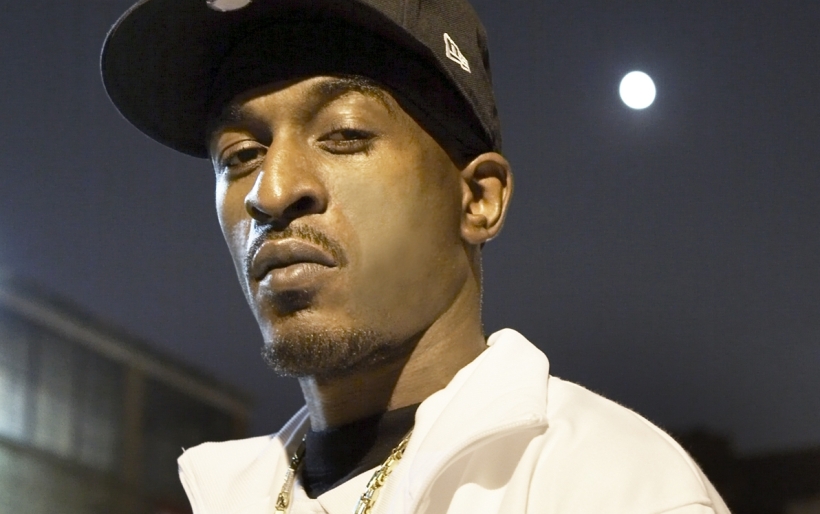 Rakim | photo courtesy of the artist

There’s Rakim. And then there is every other rapper.

If William Michael Griffin Jr. — better known in the music world as hip-hop icon Rakim — had only made golden age rap anthems as Eric B. & Rakim such as 1987’s “Paid in Full” and 1988’s “Follow the Leader,” he would still be regarded as a hip hop avatar of free rhythmic flow and studied lyricism. Masculine without macho braggadocio, confident and spellbinding without over-talking, Rakim made, and makes, slow but forceful word jazz with a writerly éclat.

Based on time playing saxophone (he’s a Coltrane fan), there is often that sheets-of-sound approach that Trane made his spiritual / ritual trademark on Impulse! recordings of the 1960s: something more chilled, stoic and stately than early rap’s frenetic attack mode. The same thing is true of Rakim’s solo output: 1997’s The 18th Letter, 1999’s The Master, 2009’s The Seventh Seal. And it’s a feel that will surely follow into his live work with the Orleans parish funk jazz ensemble The Soul Rebels and their joint program at Ardmore Music Hall on March 28.

We caught up with Rakim late one night in Brooklyn, busy working on a new book for Harper Collins (which he couldn’t discuss), and planning upcoming recorded material.

The Key: Last time we saw you, you had finally hooked back up with Eric B. after 23 years of dissolution. Was the tour fruitful for you — spiritually, aesthetically?

Rakim: Getting out on the road and connecting directly with the fans, experiencing the country, checking back in on the different scenes and cities…that’s what keeps me thriving, know what I mean?  It’s the fuel to artistic fire that makes this whole journey come together.  Eric and I would meet with people after the show and the one thing that always gets me and him is the effect we’ve had on — and I mean this humbly — but the effect on peoples’ lives in some way.  The stories they share and the way they relate to what we do really make this a whole thing a blessing.  We’ve been having a lot of fun with it, breaking out some of that style and swag we are known for, working on new transitions, new interaction.  I’ve been blessed working with groups like the Soul Rebels and other DJs to put different touches on the sets, but it’s like riding that bike with Eric going back to the original arrangements…and they still work, even better sometimes.

The Key: As a solo artist in the present day, a lot of energy around hip hop is focused around getting tracks out at a fast and furious pace, with or without an album in sight. What is your take on that — or even the business of hip hop now as opposed to when you first got in the game?

Rakim: We used to get music out pretty fast. We had a spot where we could press up vinyl the night after a session and hit the streets with it the next day. But it obviously wasn’t the instant global reach you get today. I’m pretty careful in what I put out there. I don’t jump on a topic or even use a catch phrase or street slang that can put a date on a track. So you don’t see a lot of insta-features or remixes from me.  If it’s worth taking the time to write and record, I like to make sure it’s going to stay relevant for a while.  That might not be the business model in the industry today, but I don’t think there is one way and one way only to do this thing, so I follow what I’m comfortable with.

TK: Several things that always fascinated me about you and your aesthetic style, from past to present, is its ties to jazz. You played saxophone. Your aunt is jazz soul legend Ruth Brown.  How do you think that your jazz background made you want to work with the Soul Rebels?

R: Thanks to my family — my Aunt Ruth, my brothers Ron and Steve who were both musicians, my moms and pops — I had been introduced to a lot of different music, and when I first starting playing the sax and the drums, it was the techniques of Coltrane and jazz as a whole that captured me. How can I make my voice the instrument, how can I use different melodies and syncopation, different tonality and flow to create something original?  When you think about hip-hop, the thing is we were always trying to emulate that live band sound, but we didn’t necessarily have the resources, so we used what we had: a microphone, a couple turntables, a mixer and crates and crates of old records. Now that I have the resources to team up with live musicians, I can take it even further and mix in different arrangements, but still hold onto that jazz foundation with the way I deliver my rhymes.  Finding The Soul Rebels — actually I think they found me — but working with The Soul Rebels and combining my voice with the way they play, it’s like finding that perfect beat, that sound that I could lay over precisely.

TK: The Soul Rebels have several different sides to them — as do you — such as bop, New Orleans’ funereal music, funk. Are you riding with all of their vibes during these shows? Is it mostly improvisational with they or you setting a tone or feeling it out? Are you walking in there with prepared material or just riffing?

R: We joke that they grew up digging through the same crates that I did.  It’s not just a joke though. They have a lot of the same influences, a lot of the diversity of musical interests that I do, so it’s almost inherent when we put things together.  I don’t know if it’s improvised, but we don’t necessarily over rehearse it and we can look at each other and switch things up to fit the vibe of the show.  It’s maybe close to what those jazz trios or quartets do when they riff off solos: everyone knows the track, everyone builds off the same foundation, but there is room to take it to different places…sometime real subtle, sometimes in your face, but room to make each performance its own thing, know what I mean?

TL: Are you cool with how now hip-hop treats its masters of the 70s/80s/90s? The reverence seems deep, but to what end?

R: I’ve been pretty blessed to be able to do what I do for over 30 years and still have people come out and show me love.  If you asked me 10 years ago about the whole respect for your predecessors thing, I think hip-hop might have been failing a little bit compared to other musical genres like R&B and soul, where the pioneers are revered. But we’ve gotten a little better at that; there is a little more admiration out there, a little more interest in celebrating the whole history of the culture.  And we’re now getting to a point where the hip-hop heads are also heads of industry and cultural institutions, so they are in a position to shine a brighter light on what they grew up with and there might be a little more business opportunity for pioneers as well.  HipHop is constantly evolving…that’s what it’s about…so there’s new, like you call them, “masters” of the genre that come up taking new paths and expanding the art form in their own ways, but I think we are getting better at respecting the roots.

TK: Lastly, as you are walking into Philadelphia for this show, you know that this city has had deep love and respect for since 1986. Any take on what Philly has meant to you, your evolution and that of rap?

R: Man, Philly is like a second home sometimes.  I’ve played clubs, halls, the big arenas and amphitheaters here, the street parties. Mitchell & Ness gets me fitted, Charlie Mack jumps out the limo, the hoods put out that soul food and steaks…each one has the best. [laughs] The community has embraced what I do, what hip-hop does, from Day One.  It’s the birthplace to some of the best to ever touch a mic or a mixer.  And you know Philly fans ride and die hard for whatever they do…so when they show me that love, it’s no joke…ain’t where ya from, it’s where ya’ at.

Rakim plays Ardmore Music Hall with The Soul Rebels on Thursday, March 28th. Tickets and more information on the show can be found at the XPN Concert Calendar.