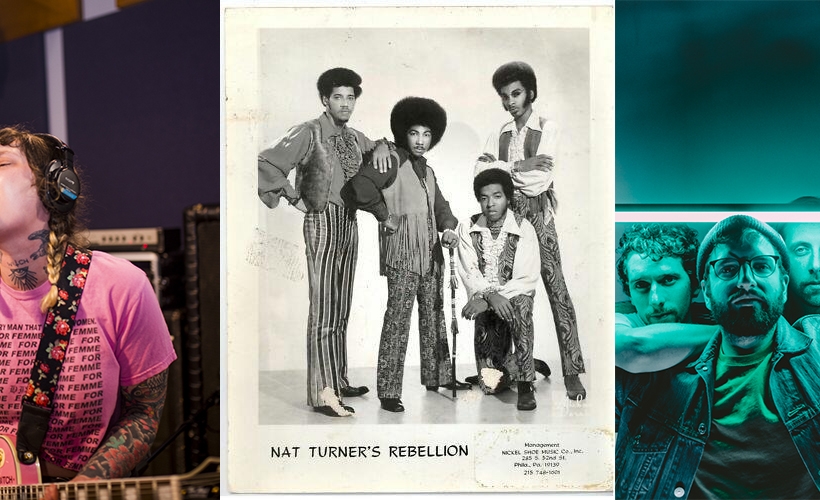 Once again, it’s happened. The stars have aligned and several Philly releases we’ve been eager to listen to all landed on the same day. We’ve got our headphones and flame emoji ready; here are five new Philly records released on March 29th: Low Dose‘s self-titled, Nat Turner Rebellion‘s Laugh to Keep from Crying,Caracara‘s Better,S.R. Frost‘s Moving Light, and Lily McKown‘s Sea of Junk.

I’ve enthused about Philly punk four-piece Low Dose at length since I first saw them at Everybody Hits last August, and their debut LP is finally here via Knife Hits and Brutal Panda records. I went indepth in my writeup on their Key Studio Session last week, but to tidily sum up: if you dig the brutal heaviness of 90s post-grunge and post-hardcore — think Mudhoney as much as L7, The Distillers as much as At The Drive-in — you’ll find much to like sonically in this ten-song set. And underneath the fray is frontwoman Itarya Rosenberg’s lyrical perspective, a collection of things felt and experiences had in the wake of what she describes as “a really f’d up divorce.” Important things are said here about toxic masculinity, power dynamics and the cycle of abuse. Low Dose celebrates the release of their self-titled album at Johnny Brenda’s on April 4th, details here.

On the surface, this lost album from 1960s Philly rock and soul band Nat Turner Rebellion feels like a record made in the wake of the TSOP explosion. The arrangements and production are very much in the spirit of the Philadelphia International catalog, like an upstart local group following in the footsteps of their national trendsetting neighbors. It was even recorded at Sigma Sound, and it shows. Listen below that surface, though, and you find that Nat Turner Rebellion’s strength is less in the music (which is totally digable, make no mistake) and more in its message. History buffs probably realize that the name comes from an 1831 uprising of slaves and free blacks against the white slave masters in Southampton County, Virginia; band members Joe Jefferson, Major Harris, Ron Harper, and Bill Spratley channeled that spirit in a historically poignant moment — after the Civil Rights Act of 1964, and the Voting Rights Act of 1965, when great progress was being made towards equality but race relations were nevertheless tense at best — and used it to talk about historic oppression while celebrating Black power. It’s a message that is just as poignant 50 years later, and the folks at Drexel’s Mad Dragon Records reissued the album after obtaining the master tapes from long-defunct local label Philly Groove Records.

Will Lindsay and his bandmates Carlos Pacheco-Perez, George Legatos, Sean Gill already had a pretty epic scope on their first Caracara release, 2017’s Summer Megalith, but their new three-song set (recorded with Will Yip and released via his Memory Music Label) is somehow yet more expansive. Better‘s six-minute title track builds and burns in moving arrangements of streaming synthesizers and towering percussion, when a coda jumps on at the two-thirds point led by guest vocals from Mannequin Pussy’s Marisa Dabice. As an opener, it slaps, and the subsequent two tracks on the EP move in incredibly dynamic directions from there, “New Chemical Hades” skewing more restrained and uncertain, and “Learn Your Love” wrapping the set up on incredibly high highs that break down interpersonal connection and dependency. It leaves us eager to hear the next Caracara full length, for sure, but it’s also incredibly satisfying as-is. Caracara celebrates the release of Better at Everybody Hits on May 3, details here.

Following up his 2017 debut Shrine, West Philly multi-instrumentalist Sam Frost — known on record and onstage as S.R. Frost — returns today his latest offering, Moving Light, recorded with Cheerleader’s Josh Pannepacker at his Thanks Mom Studios home base in South Jersey. Beginning with introspective acoustic songwriting as its skeleton, Frost builds up his compositions with beautiful psychedelic arrangements in the spirit of Andy Shauf, Jon Brion, post-DreamWorks Elliott Smith, and hell, late-era Beatles. It’s playful, thoughtful, moving, and easygoing all at once. S.R. Frost celebrates the release of Moving Light at Ortlieb’s tonight, details here.

A member of the extended Super Wimpy Punch label family — at least enough so that last night’s EP release party took place at their Super Wimpy HQ house — Philadelphia’s Lily McKown walks the balance beam between folk and anti-folk, at points recalling Ani DiFranco, Kimya Dawson, Queen Ansleis-era Hop Along, and 90s / 00s Mountain Goats. Sea of Junk opens with a title track that has a breezy Courtney Barnett vibe to it (sorry, I’ll stop with the comparisons already), crafting lyrical images like “I think your mind goes blank / an empty fishtank replaced with 90 proof alcohol” or “when does life become an Excel spreadsheet with a coffee cup?” Spacey synthesizers enter, McKown’s delivery is understated yet inviting, and before too long you’re swept away into the musings of a singular new voice in the Philly music community.